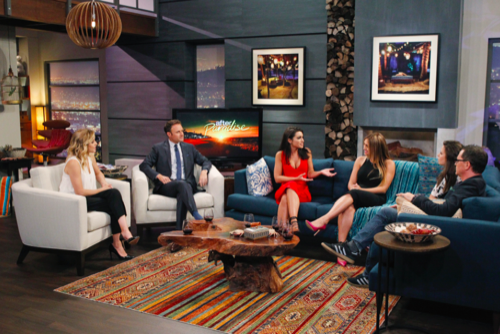 Bachelor In Paradise – After Paradise airs tonight on ABC with an all new August 10 season 1 episode 2. We’ve got your recap down below! On tonight’s episode cast members and celebrity fans discuss episodes of “Bachelor in Paradise.”

For those of you who don’t know Bachelor In Paradise – After Paradise features host Harrison and co-host Mollen discussing and dissecting the most recent episodes of “Bachelor in Paradise,” alongside cast members and celebrity fans.

On last week’s episode actors Josh Malina and Katie Lowes from “Scandal” appear, along with cast member Ashley Iaconneti.  Did you watch the episode?  If you missed it we have a full and detailed recap, right here.

On tonight’s premiere episode per the ABC synopsis “Fresh Off the Boat” and “The League” star Paul Scheer will join Tenley, Ashley S. and Jonathan as panelists on ABC’s after-show “Bachelor in Paradise-After Paradise.”

Tonight’s episode of live Bachelor After Paradise kicks off with Chris Harrison and his special guests Ny Times best-selling author Jenny Mollen and actor Paul Scheer. First they discuss tonight’s cliff-hanger, will Clare quit the show or go back in to the rose ceremony. Paul laughs that Clare might as well just leave because she dug herself a hole and has started acted like a drama queen. Nobody is going to want a rose form her if she goes back to the ceremony.

The hot news of tonight isn’t Clare though – it’s Joe. He started off on Kaitlyn’s season as a pretty down to earth and friendly guy, and as Paul Scheer puts it, he has transformed in to Norman Bates on “American Psycho.” Jenny laughs that she doesn’t think it is safe for Chris Harrison to be on an island with Joe because he clearly has a rage disorder.

Chris Harrison brings Tenley out to join in on the conversation and give her two cents on Joe. Tenley explains that when Joe arrived in paradise, he was being super funny because he was so awkward. Paul laughs that he thought the producers told him to be that awkward, because he was really convincing. Chris Harrison shares a highlight reel of all of Joe’s horribly awkward moments this week – including when he “made Mikey his bitch.”

Next, Chris takes a call from a viewer. The fan on the line asks Tenley what she thinks Juelia saw in Joe? Tenley explains that Joe is really deceiving, she fell for fake Joe just like Jeulia did because he wasn’t making all of those comments in front of the girls. Tenley did think it was a little strange that Joe wasn’t giving Jeulia that much attention – but then again it was a TV show and technically they were still playing a game too.

Before Tenley leaves, Chris asks her what she thinks about Ashley I. dubbing her “the old lady.” Tenley laughs that she wasn’t even the oldest lady there, and there is no way her eggs are dried up. She reassures Chris that her eggs are “organic, cage free, and ready to go.” Tenley admits that she just turns 31 years old, they laugh that Chris and Paul have concert t-shirts that are older than Tenley.

Next Jonathan joins Chris on stage to discuss his meltdown and sobbing in the bathroom. They replay the clip from the rose ceremony, and Jonathan is not happy. He explains to Chris that he is more upset about the fact that he wasn’t able to protect Jeulia from Joe, than he was about Joe playing everyone. Jonathan thinks it was a low blow that Joe brought his son in to it, and lied and said that he was in to Jeulia.

Paul doesn’t understand how Jonathan isn’t freaking out because Joe pulled a jedi mind-trick on him and made him cry. Jonathan really thought that they were friends, and he was shocked to see Joe on TV calling him his “bitch.” Chris asks Jonathan what he would say to Joe if he got a chance to see him face to face. Jonathan says he would tell Joe to never call him or text him again, and if joe ever talks about his son again he will sash his brains in.

Next Ashley Salter joins Chris on stage to discuss her thoughts on Joe, she says that Joe rubbed her the wrong way from day one – and she thought that he was really rude. Ashley was trying to be nice to Joe though because she was friends with Jeulia and she was really in to him. Chris takes a phone call from a live viewer – she asks why Ashley hasn’t been crazy this season? Paul laughs that Ashley has definitely been crazy this season, and she is basically the Yoda of The Bachelor. They have a lie fan vote and Bachelor Nation doesn’t think Ashley is crazy, they think she is “crazy like a fox.” Next, Chris shares a never-before-seen clip from Bachelor In Paradise – it’s footage they caught on night cameras of Ashley and Dan sleeping in bed together. Ashley looks like she is half asleep, and she keeps standing up on the bed and staring at Dan while he is sleeping.

Before tonight’s episode of Paradise After Dark is over, Chris shares a video of next week’s show – and it looks like Joe will continue stirring up some crazy drama.