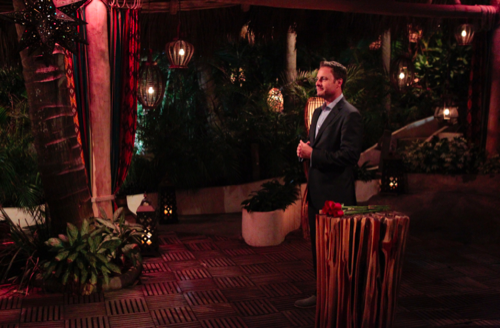 Bachelor In Paradise airs tonight on ABC with an all new Monday August 17 season 2 episode 3B. We’ve got your recap down below! On tonight’s episode Samantha and Joe are confronted about their relationship and their history together.

On tonight’s episode per the ABC synopsis “Samantha and Joe are confronted about their relationship and their history together. Later, Ashley S.’s hopes to reconcile with Dan are dashed when her best friend Amber arrives and asks Dan out. Also: J.J. and Megan enjoy a date on a yacht.”

Tonight’s episode of Bachelor In Paradise kicks off with Jeulia and Samantha sitting down to discuss what Joe Bailey has been up to. They were close friends on Chris Soules’s season of The Bacheor, Jeulia and Jade explain to Samantha how much of a douchebag Joe was to her. They think that Samantha has a right to know who Joe really is. Samantha interrupts Jeulia and Jade, she doesn’t want them to talk crap about Joe without him there. Samantha wants to go get Joe so that he has a chance to defend himself. Jeulia and Jade are shocked – Samantha informs them that she is on cloud 9 when Joe is around and she doesn’t want to hear about him dumping Jeulia.

Jeulia fills the other girls in paradise in on Samantha and Joe. They are all shocked that Samantha totally dissed Jeulia, they used to be best friends after The Bachelor. Meanwhile, Samantha goes for a walk with Joe – she tells him about her conversation with Jeulia. Joe explains that he had to say what he said so that he didn’t get sent home and he could be with Samantha. Samantha thinks that what Joe id was sweet.

Meanwhile, Tanner reveals to Jared that Joe and Samantha were scheming before the show started. Tanner says that Samantha told Joe to “do whatever it takes” to stay in paradise until she got there so that they could be together. Tanner and Jared go try and talk to Joe – they try to get Joe to come clean to the group and explain that they were talking before the show started. Samantha kicks Tanner and Jared out of the room, she won’t let them talk to Joe.

Meanwhile, there is trouble in paradise for Ashley S. and Dan. Ashley is confident that they will be able to patch things up though. Another girl arrives, it’s Amber James from Chris’s season of The Bachelor. All the girls rush to greet her – Ashley Salter is so excited that she is there. Amber arrives with a date card and has to ask one of the guys to go to dinner with her. Ashley’s excitement changes though – because Amber announces that she wants to take Dan on a date. Dan takes Amber for a walk, he explains to Amber that he has been dating Ashley and he wants to make sure that it is okay with her before they go out to dinner. Next, Dan takes Ashley for a walk – he explains to Ashley that e is going out with Amber and he doesn’t want things to be awkward. But, they are already awkward…and Ashley is not a happy camper.

The next day, Megan and JJ head out on a yacht for a date together. Once they are out in the gulf, they hop off the boat and go ride jet-skis. They seem to be hitting it off, and JJ raves that he feels a connection with her for the first time since he arrived in paradise. Meanwhile, back at the resort – Dan and Amber get ready for their date. Ashley sees Dan and Amber dressed up for dinner, she is busy getting drunk – and she is furious. She thinks that Dan was acting and he is not even a good guy, Jeulia comforts Ashley while she cries. Jeuia is just as upset as Ashley – she has been watching Samantha and Joe make out today. Ashley starts to become unhinged – she heads outside and starts talking to the birds. Carly and Jade joke that “crazy Ashley is back.”

Amber and Dan’s date seems to be going smoothly – Amber is thrilled to get to know Dan because she had a huge crush on him when he was on Desiree’s season of The Bachelorette. When they are walking through the square, people see the cameras and start cheering for Amber and Dan to kiss. Dan raves about how amazing a kisser Amber is. They finally head to the restaurant for dinner, and sit down to eat together. They chat about what Amber thought about him when he got out of the limo on Desiree’s season of The Bachelorette. The talk turns to what happened between him and Ashley, he explains that he realized he and Ashley had no future outside of paradise – he realized that it just wasn’t going to work out. Amber leans in for another kiss, and they spend the majority of their dinner making out. Meanwhile back in paradise, Ashley has moved on from the birds, now she is talking to the crabs. Joshua Albers says that Ashley has “officially lose her last marble.”

JJ returns from his date, he sits down with Tanner and Jared – they fill him in on the Jeulia drama. JJ is furious that Joe lied to him, and they were talking before they got to paradise. JJ thinks that Joe should give his rose to Jeulia and give her another shot at love, and then he can leave with Samantha and they can live happily ever after. JJ tries to tell Joe that he should give the rose to Jeulia and leave – but Joe doesn’t want to hear about it. Jared points out that Joe lied to everyone, and told them he didn’t know Samantha – now he is changing his story and admitting that they talked online. Joe snaps at JJ that it is none of his business, and who he gives his rose to is not his problem. He starts making faces at JJ like a child, he announces that the conversation is “done” and storms off. JJ and Joe wind up in a screaming match and JJ calls him a “piece of shit.” JJ says that he is going to send Joe home with “four missing teeth.”