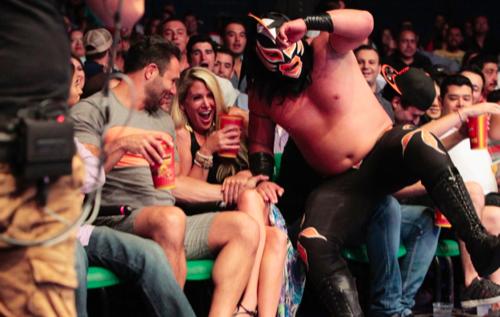 Bachelor In Paradise airs tonight on ABC with an all new Sunday August 23 season 2 episode 4A. We’ve got your recap down below! On tonight’s episode Joe and Samantha address the controversy surrounding their relationship; Juelia asks Chris Harrison for an unprecedented favor.

On the last episode, Samantha and Joe were confronted about their relationship and their history together. Later, Ashley S.’s hoped to reconcile with Dan are dashed when her best friend Amber arrived and asked Dan out. Also: J.J. and Megan enjoyed a date on a yacht. Did you watch the last episode? If you missed it, we have a full and detailed recap right here for you.

On tonight’s episode per the ABC synopsis “Joe and Samantha address the controversy surrounding their relationship; Juelia asks Chris Harrison for an unprecedented favor; Tanner and Jade visit Tequila, Mexico; notorious Nick Peterson returns and takes Ashley S. on a date; Jared ends his relationship with Ashley I., leaving her in tears.”

A snake has wondered into their little utopia and now no one appears to be happy on tonight’s all new episode of “Bachelor in Paradise”.

Picking up from last week, Joe has been getting hassled from what feels like every corner of the resort. Apparently no one liked what he did to Juelia and seeing as its pretty obvious that he only used her to get a rose then there really isn’t a way for him to talk himself out of this mess he’s created. But before everyone goes blaming everything that happened on Joe – it should be noted that other people did play a part it how this entire fiasco came about.

After all it was both Joe and Samantha that had agreed beforehand to use whoever was necessary in order to stay in Mexico until the other arrives. So Samantha isn’t innocent in this. And she did set out to manipulate others.

However what’s actually shocking about Samantha is that she pretty much left it to Joe to take all the blame. As in, I’m sitting at home and I can tell that this woman is clearly thinking about only herself and other people’s feelings aren’t really registering.

Thus a great of example of this would be in what happened at the group confrontation. See the entire house had come together and they were all going to merely talk everything out. Yet when Joe finally admitted to shady actions, he was once again left on his own by his supposed lady love. Who by the way refused to confess to anything she had been accused of. Including talking to Joe prior to their arrival.

And that was outright laughable. Everyone knows she’s lying but Samantha believes if she’s keeps denying it then the rest of the group will eventually drop the issue.

Although with a rose ceremony on tonight’s episode, no one could “just forget” what happened at the last one. That’s why JJ who is considered a free agent was asked by multiple parties to give his rose to Juelia. They went on to say she deserved a fair chance at finding someone and they wanted to give her that after she had already wasted a rose on Joe.

But Juelia was someone who didn’t want to take that same opportunity from JJ. So, when no one was looking, she approached Chris Harrison (out esteemed host) and she asked him if there was a maybe a chance that Mikey could come back.

Mikey had been a good friend to her and she felt like he was genuine person.

So I for one would have liked to see where Juelia was going with this idea of hers. Though, the rose ceremony ended up happening before Chris didn’t get the chance to check out the Mikey situation. And that meant we couldn’t find out if eliminated contestants could come back by popular demand.

And that JJ was still going to be forced in the end to make a decision.

Although who he ultimately chose surprised everyone. Especially Ashley S. who was left standing with a rose and had no idea why.

In fact Ashely was so confused that she even tried to give the rose back. Only JJ made her take it because he felt like she was just as deserving of a second chance. But as for JJ himself, he announced to everyone after handing out his rose that this was going to be his last night there in Mexico.

JJ had apparently left a relationship just before he came on the show and he told everyone tonight that he realized he was still very much attached to this other woman. So he left the show in order to go home and see where this other relationship takes him. And as another surprising moment, none of the women were angry at him for having a woman back home.

It was almost as if it was so tastefully done that no one could be upset. However with JJ out of the running and Dave going on to give his rose to Amber – it looked like Juelia was going to be sent home.

But Chris had come through for her and Mikey had been invited back where he then chose to save Juelia this week. So Juelia got her second chance as well. And with both her and Mikey around – it was Joe that was left feeling upset by the rose ceremony.

Joe had thought, that without Juelia there, the drama would eventually dissipate. And instead not only did she stick around but Mikey was now back as well.

And so there was this question of when not if Mikey was going to take a go at Joe. Though Joe for the most part simply wanted to focus on Samantha. He said what he feels for her is very much real and he was literally envisioning a future with kids for them when Nick arrived. Nick being the other man that Samantha was texting and talking to prior to the show.

Thus this Nick was pretty confident on his first day down there. He thought he was simply going to go up to Samantha and that they would naturally hit it off like they’ve done once already. But he was left stunned when he received his date card only to later get turned down.

Samantha, as it turned out, was perfect willing to pretend like nothing had happened between them. So she declined the date (possibly out of guilt for what happened with Joe) and it was kind of awkward on Nick’s part because he came on the show for the sole purpose of seeing her.

And so he took Ashely S on his date when it looked like she was the only one left to ask.

Thankfully, though, Ashley and Nick ended up having fun even when their plans were put on hold because of a hurricane. For the record it was actually Hurricane Carlos that they had run into and because it was picking up speed and velocity – their plans to visit a private island had to be abandoned. And that’s why they got completely drunk as part of a Plan B.

They were plenty of drinks and also had a tequila massage thrown in. So at first Ashley and Nick were merely having a good time but once the drinks started to kick in – they had moments when they either were making out or calling each other brother and sister. And overall it was just a very drunken first date that hopefully will be a bit of blur come the morning.

But Tanner and Jade’s date went the opposite direction.

These two had hit it off during their first week there and it looks like it’s getting serious tonight. Tanner admitted that he could fall in love with Jade. And Jade doesn’t appear to be that far off from falling in love herself.

However, back at the resort, things seem to be falling apart between Joe and Samantha. Samantha has apparently begun distancing herself from Joe and pretty much everyone can see it. Yet when Joe asked her what was wrong – she made it out like she was still unsure about whether or not he’s a good guy.

Samantha asked him if he was as good of a person as she thinks then why all this drama. And Joe, on his part, couldn’t really answer her. Particularly as he wants the drama to go away just as much as she did but what was more important to him was their relationship. Not gossip. So when it looked and felt like she was pulling away – Joe started to unravel.

He’s been her lapdog from the very beginning and the more distance she attempted to put between them – the more he kept trying to fix whatever was wrong. And though he’s not the greatest guy in the world – watching him get his heart broken was just sad.

And the same goes for Ashley I. Ashley set her sights on Jared on their first night there and he then did his best to return her feelings but unfortunately he’s still not over Kaitlyn. So like Joe, her dreams of this great romance went down in flames on tonight’s episode.

And Joe also got the breakup talk.

Samantha had come to his birthday dinner that he had set up in her honor and she then told him that she wasn’t ready to start a relationship. And later followed it up that she wanted to go on dates. You know to figure things out. But its how Samantha topped her night that made her look like the most manipulative person on the show.

Because there was really no reason whatsoever that Samantha felt the need to announce that she was single to the group in almost celebratory mood.

She made it how that she had dumped Joe once she saw for herself that he wasn’t a good guy. When truthfully she managed to stay with him all the way up to a rose ceremony until she started having these doubts. So by this point – where he had been dropped by someone so heartless – that’s when Joe got angry.

He had fallen on the sword for her, made enemies for her, and really all he did was take her advice. Now she gets to make nice with everyone meanwhile he’s still the one that’s still getting hate-filled glares.

So there’s no way he’s going to let her get away with what she did now that he knows she never really valued their relationship.