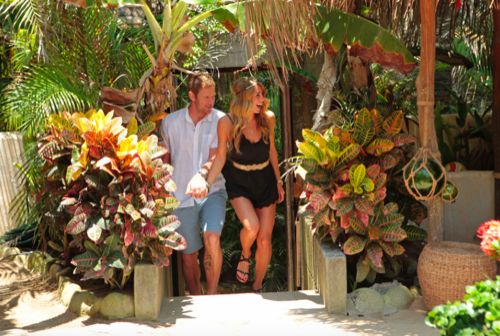 Bachelor In Paradise airs tonight on ABC with an all new Sunday September 6 season 2 episode 6A. We’ve got your recap down below! On tonight’s episode Ashley I. whisks Jared away to a luxurious hotel.

On the last episode, Chelsie asked Nick out and they enjoyed an ocean cruise on a luxurious yacht and go snorkeling. Later, Mackenzie arrives in Paradise and invited Justin on a date. The pair were then “married” by a Shaman. Back at the resort, Jaclyn showed up and set her sights on Jared. A jealous Ashley I. then asked Chris Harrison for an unprecedented favor—an overnight fantasy suite date. Did you watch the last episode? If you missed it, we have a full and detailed recap right here for you.

On tonight’s episode per the ABC synopsis “Ashley I. whisks Jared away to a luxurious hotel; Mikey decides to end his relationship with Juelia; two new bachelorettes, Jaclyn and Cassandra, arrive and they both want to take Justin on a date; Samantha and Nick visit an elegant resort; eight people are eliminated at the rose ceremony.”

Paradise is coming to a close on tonight’s season finale but, before it goes, we got to see a whole another side to some of our most memorable cast members.

Take Ashley I. for instance. She’s a pretty and young woman who has never sought out to create problems. Either for herself or others. So many of us find her to perfectly lovely. Yet this catch was so wrapped up in desperately wanting to live out an Arabian Nights fantasy that she wanted to play her V card in order to win herself an Aladdin lookalike.

Ashley if you recall is a virgin but, up to a certain overnight date, she’s been very careful about giving up that status to just anyone instead of someone she knows to be “the one”. However, for some unfortunate reason, Ashley has chosen Jared to as the perfect man. And there’s really only one thing getting in the way of their happily ever over – he’s already told he doesn’t see her as a romantic interest because he still not over another girl.

Thus, throwing sex into the offer will not be making that much of a difference in the long run. If anything he just gets a highly unique goodbye.

And that’s what tonight’s episode is all about. People were figuring out if their relationships were going to work in the real world and if not then they trying to end things as friends. Like what Mikey did for Juelia.

Mikey was brought back to the show upon Juelia’s suggestion and the two did appear to hit it off. Though only as friends. So Mikey later took Juelia aside and he told her that he was sorry about the way things worked out between them. And that he hoped they could still be friends even after the show.

But Juelia had apparently gotten fed up with rejection, what with both Mikey and Joe turning her down, so she left the show willingly not long after she had talked to Mikey.

Which, in lighter terms, meant he was available and he didn’t necessarily have any baggage from failed relationship lying around. Though did newcomer Cassandra choose such an easy choice? No, she did not. Instead, on her first day there, Cassandra stirred the pot by asking Justin out on a date.

And the reason that became a problem was that Justin had recently accepted a date from Jaclyn on the same day. So, when you think about it, Justin was definitely playing the field. Yet he could at least have been a little more considerate with women’s feelings.

Jaclyn wasn’t going to beg and she wasn’t going to share. So she told Justin to be happy on his date with Cassandra and then she had some fun with her date card. You see Nick wanted that date card for Samantha and Jacklyn wanted to humiliate Nick.

Hence the two were able to come to an agreement.

All Nick had to do was roll around in the hot sand pretending to do a Victoria’s Secret shoot. And Jaclyn just wanted to watch. So once his humiliation was over – Jaclyn allowed him to have her date card and try his luck out on Samantha.

Bu why Samantha of all people? She went through a slew of people and no one besides the guys like her. In fact, despite it just being the ladies, there has oddly enough been more than one plan to get rid of her.

Yet she’s survived them all and still had Nick asking her out in spite of the way she had initially blew him off when he first showed up in paradise.

Naturally Samantha said “yes” because, well, she’s hasn’t tied herself to anyone since Joe. And to be fair Samantha is great on dates. She likes to enjoy herself and she somehow always finds a way to make a guy feel special in a manner of minutes.

And if there’s a flaw in her grand master plan then it’s in the follow-up. That cracks don’t show until after the date. And by then it’s usually too late for one guy that’s been duped.

With Samantha, we either see or hear about how she claims to be interested in one guy but then whispers someone else’s name in a friend’s ear. And she did this with more than one guy. So ladies have a pretty valid reason not to like her – they know she’s going through a small pool to look for whoever will hand her a rose that night.

And as for the guy that Jaclyn was supposed to be enjoying the date with, Justin ended up having probably his best date ever with Cassandra. Cassandra is a woman after his own heart. They’re both single parent and they have no problems whatsoever discussing the many things going on with their kids.

Others might find that boring but not them. So, ultimately, they were a great fit and looking back – I for one wasn’t sure if Jaclyn ever had a chance. Jaclyn is in paradise to enjoy herself and due to poor timing she was literally left with slim pickings.

Jared left the morning after his date with Ashley. And though we heard nothing happened, Ashley was hoping that night would have sealed the deal.

So that was that for them. Jared left after he had spoken to Ashley and told her that he wished her nothing but the best. And before the next rose ceremony could come around, Ashley decided to leave as well.

It seems she had decided to look at her experience with Jared as something of a learning curve. But deep down she knew she couldn’t make the next step in getting over him while she staying in paradise. So she left in a flood of tears and that left everyone else to deal with a rose ceremony.

With there being more ladies than men, the rose ceremony itself was bound to be a difficult decision for many.

But, never did I think so many of them would be going home. Two guys left the rose ceremony after realizing that they didn’t have anyone on the show to hand their rose to. And that meant two girls lost out on the chance to stick around for just a tad longer.

First it was Dan who would have given his rose to Cassandra if Justin hadn’t beaten him to it. And after him there was Mikey who many felt should have left the show with Juelia but who chose to stick around. Apparently that was because he wanted to try his hand at a chance with Mackenzie. Yet he too ended up leaving the show after she turned him down.

So eight people went home after one ceremony. And to be honest, the relationships that were left weren’t all that stable.

There was five couples left once the rose ceremony had wrapped up and Chris told them that there’ll be no more new people coming in. So these couples had a chance that no one else did. They finally had a chance at having some alone time.

Not only were they all going to be getting dates that included fantasy suites but with less people around – there wasn’t an opportunity for anyone to disrupt a good thing.

However Kirk was standing in his own way on tonight’s season finale. For he had had some doubts about his relationship with Carly and, rather than discuss it, he tried to ignore it until that was no longer possible. So guess what? Carly wasn’t ready to deal with his misgivings when it started to feel like he had been leading her on.

And to an extent, she was right. If Kirk had been honest earlier then maybe Carly could have helped put certain issues to rest. Yet for him to wait after full week of doubting everything – until she’s discussing future children – that made her feel like she had been building dreams with someone that was just tolerating the idea.

Thus she didn’t want to stick around. She wanted to leave the second Kirk told her he wasn’t ready for the relationship she wants.

Kirk attempted to stop her and even to talk to her but Carly wasn’t having it. She felt betrayed and the rest of the girls understood where she was coming from. To them, Kirk was the bad guy in this situation.

Although, even as he was leaving, Kirk still didn’t understand how everything blew up the way it did.