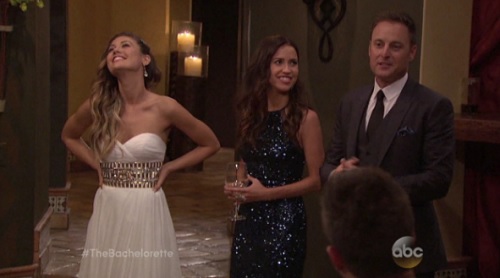 The Bachelorette 2015 spoilers tease that Season 11 of the reality TV dating show will premiere on Monday, May 18 on ABC. Spoilers have been rolling in for The Bachelorette for weeks now, and ABC has released the first official promo video for Season 11, starring Kaitlyn Bristowe and Britt Nilsson. Bachelorette 2015 spoilers have been teasing some crazy drama this season, and judging from the all new promo video – fans are in for a treat.

Bachelorette 2015 spoilers recently revealed that Season 11 would kick off with not one, but two Bachelorettes – Kaitlyn Bristowe and Britt Nilsson. In the all new promo video, both women line up in front of the mansion to meet the 25 eligible Bachelors for the always hilarious and awkward limo entrances. And, whomever the guy is that shows up inside a life-size cupcake in the promo, is definitely a keeper!

The Bachelorette promo video teases, “2 Bachelorettes, 25 Guys, 50 Shades of Cray.” There are some clips from opening night in the spoiler video, after all of the men have exited their limos Chris Harrison crashes the meet and greet cocktail party and announces, “There are two Bachelorettes, but that’s about to change. There is going to be a vote.” Afterwards, Kaitlyn Bristowe sobs that she “Doesn’t think she should have to do it like this.”

And, as always, it looks like there will be some major drama during the 2015 premiere, some of Kaitlyn and Britt Nilsson’s guys are shown in the spoiler video pushing each other and arguing inside the Bachelor Mansion.

Are you as excited as we are for the Season 11 premiere of The Bachelorette? What do you think of the all new promo video and the 50 Shades of Grey theme? Let us know what you think in the comments below and don’t forget to check CDL tomorrow for more Bachelorette 2015 spoilers and news.