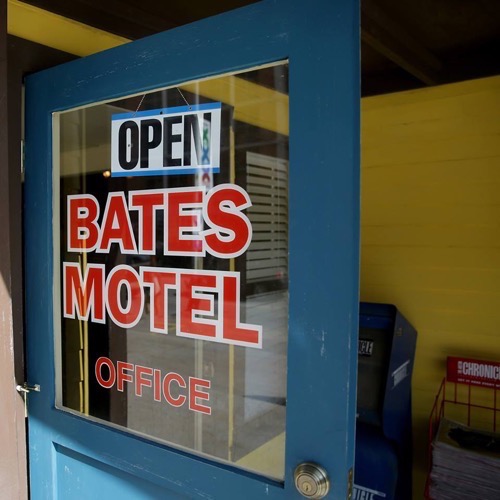 Bates Motel airs tonight on A&E with an all new March 23, season 3 episode 3 called “Persuasion” and we have your weekly recap below. On tonight’s episode, as Norman grows closer to Emma, he starts grow apart from Norma; Norma balks when Romero asks Norman some tough questions; and Romero meets his competition for reelections.

On the last episode, Norman and Norma fixated on Annika’s disappearance. Norma learned what the Arcanum Club really was. Dylan and Caleb encountered a new neighbor. Did you watch the last episode? If you missed it, we have a detailed recap right here for you.

On tonight’s episode as per the A&E synopsis, “Normans and Norma grow apart as Norman and Emma grow closer. Norma balks when Romero asks Norman some tough questions Romero meets his competition for re-elections.”

Norma is seen walking through the halls of the morgue, she enters a room and Romero is there, he thanks her for being there. There is a body on the table, they found the girl floating in the tidal flats. Norma sees the toe polish and tells Romero she thinks it is her, Annika who rented a room at her hotel, he uncovers the face and Norma tells him that it is not her.

Norma is back home, Norman asks her what is wrong and she says that she threw up on herself because the smell in the morgue was terrible. Norman goes on to ask if the girl in the morgue was Annika, Norma says no. Norman was to continue talking about it and Norma doesn’t want to, she tells Norman to lay off because she has to start school and doesn’t need this today. Norma tells Norman to stay out of it.

Norma is at school, she is looking for Business Marketing 101 and heads to the main building. In the class, all the students are already seated and Norma walks in feeling quite awkward. The teacher walks in and tells her that she is sitting in his chair, Norma tells him to pull a chair into the middle. Norma is in the wrong class, History of Psychology – she leaves.

Emma is getting dressed, she puts on a cute dress, high heels and lipstick. When she arrives at work, Norman is shocked, he tells her that she looks good. Emma says she gets bored of wearing her usual clothes sometimes and needed a change.

Romero arrives at the club, he tells Bob that a woman was found in the tidal waves early in the morning and wants to know if any girls went missing. Bob asks Romero whats worse, sex parties or drug wars. Romero tells him that if he thinks he is going to walk away from this crime because he thinks he has a free pass because of things that have gone down in the town, then he is wrong.

Dylan is working with Caleb who offers him money for lumber for the barn – Dylan turns him down.

Romero stops by to see Norma, he tells her it is not a social call, he needs to talk to Norman about the girl in the morgue; he wants to know if there is a connection between her and Annika. Norma is against it, but Norman suddenly walks up and Romero tells him about the girl that was found in the marsh. Norman asks Romero to enter the house, he then tells his mother to go make dinner while he answers the questions.

Romero asks Norman if he knew Annika was a prostitute, he says yes, she kind of made him know that. Norman tells him that he opened up about his mother to Annika and she opened up to him about being a prostitute. Romero says it is interesting how women connect with him, like Blair Watson. Romero goes on to ask more questions, Norman tells him that he drove her to the bar and then left, he never saw who she was meeting. Romero shows Norman a photo, it is the girl in the morgue. He tells Romero that he has never seen her. Romero has one last question, did Norman ever hear Annika mention Bob or the club, he says no. Romero leaves.

Norma is pissed off at Norman for sending her out of the room when Romero asked him questions. Norman asks her why she told Romero that he was the last person to see Annika. Norman then asks her why she went to the party, why she lied to him. Norman is furious, he tells her that one of them has a problem and he is tired of the assumption that it is him.

A girl walks into the motel office, she has a delivery for Dylan. Emma goes to the girls van with her and it is full of pot plants and she wants Emma to take delivery of it, she does. Emma crams all the weed into her small car and drives up to see Dylan who is surprised to see her. Emma tells him that she couldn’t leave it at the hotel in case Norman found it. Caleb walks up, he sees Emma and says hello. Emma is surprised that Norma’s brother is with Dylan. Caleb excuses himself, Emma asks Dylan what he is like and if his mom knows that he is there. Dylan asks Emma to not tell anyone that Caleb is with him, especially Norma or Norman.

Norma is at school, the Psychology teacher meets up with her apologizes for being rude to her the day before. Norma thanks him. He tells she looks stressed and he could help her, it’s a secret club of the damage for people who had crappy upbringings. He goes on to say that he sees a kindness, sensitivity and hurt in her eyes – if she wants to talk about it, he is there for her.

At the station, the have the victims name, Lindsey Davis, 22 years old, she arrived in Portland 4 days ago – her profile was on a high end escort service. All of a sudden a guy named Marcus Young arrives in Romero’s office, he is running for Sheriff. Young tells Romero that his daddy has a lot of friends in the neighborhood and it is time or him to move on. Romero says that he is not moving on and Young is not going to be the next Sheriff, he hopes he hasn’t sold his house in Missouri and it is the last time he is ever going to be in his office. As Young is heading out the door, he pats Romero on the back and tells him that if he can be of any assistance with the homicide, he should just holler.

Dylan joins Caleb by the fire and asks him where the lumber came from. Caleb says he doesn’t know and says maybe Guntar bought it. Dylan says he would have found some way to get the money to buy it, Caleb confesses he did it and tells Dylan to just accept because he just wanted to do something for him.

Norman confides in Emma, tells her that his mother is micro-managing him; it’s just differently lately, like he can’t do anything right and he is outside of her. Emma tells Norman that he is not bad, he says he doesn’t know, if someone always thinks you have done something wrong, then you think you have done something wrong. Norman starts shouting, then storms out and tells her that he is finished talking. Emma follows him outside – but he soon goes into the house and glares at his mother when he passes her on the stairs. Norma confronts Norman and asks what is wrong. Norman tells her that he was willing to take full responsibility for Ms. Watson and she has no right to make it look like he killed the girl who ended up in the marsh. Norman starts to freak out, banging the bed, tells her he did not black out that night and did not kill her. Norma tries to console him, but he shouts at her to get out.

Norman goes to the bathroom, washes his face and looks in the mirror, he looks completely unhinged. He hallucinates that he sees his mother and she asks him if he killed her, he says he can’t remember if he did, it is a blur in his head. She tells him to remember when he was trapped in the box and thought he was going to be buried in the ground, he remembered everything in there. She turns around to pour a bath, he says to her, you told me you killed Ms. Watson, she says that she did and then tells him to get in the bath – put his head under water and recreate how he felt in the box, maybe then he will remember how he killed Annika.

Norman is in the tub, he goes under water and start to think back. He sees himself pick up a girl who gets in his car, then there are other images of Ms. Watson. All of a sudden, Norma is at the bathroom door and starts to freak out when Norman doesn’t answer. She breaks down the door and pulls him out of the tub. Norma tells him over and over again that she is so sorry.

Later, Norma puts Norman to bed, tells him that she is going to go down and close the office. Norman asks her, what if he did kill her, she walks away. Outside, Norma is hyperventilating, she turns off the lights in the office and a car pulls up in front of the motel, it is Annika, she is back. Norman asks her if she is ok, Annika collapses and puts something into Norma’s hands, she says “use it, do something with it, it’s important”, blood is all over Annika’s stomach and hands – then she passes out. Norma runs into the office, calls 911 and ells then that someone has been short. Norma looks into her hand and it is a memory stick that Annika handed her.