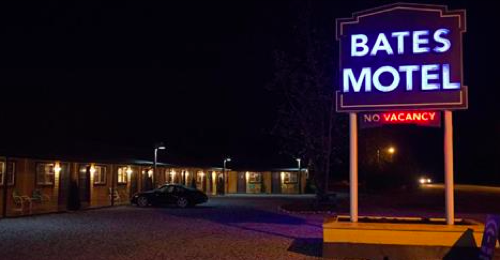 Bates Motel airs tonight on A&E with an all new March 9, season 3 premiere called “A Death in the Family” and we have your weekly recap below. On tonight’s episode, Norman [Freddie Highmore] and Emma [Olivia Cooke] each make a decision about their future.

On tonight’s episode as per the A&E synopsis, “Norman and Emma each make a decision about their future. Norma sets boundaries with Norman. An unexpected visit causes trouble in Dylan’s fresh start.”

Tonight’s episode is going to be a great one and you’re not going to want to miss it. Bates Motel airs on A&E at 10:30 PM EST, while you wait for our recap hit the comments and let us know how excited you are about this new season.

Norma and Norman’s relationship isn’t normal and her other son Dylan is starting to see how much for himself on tonight’s season 3 premiere. Dylan was apparently trying to wake Norman for his first day of senior year when instead of finding his brother asleep in his room – he found him cuddled up against Norma in her bed. So feeling a tad unnerved by it, Dylan later spoke with his mother. He told her that Norman shouldn’t be sleeping with her and that it was not ok for a 18 year old to want to sleep with his mother.

Yet Norma him it was nothing. She said Norman and her had fallen asleep together after talking late into the night. And she refused to let Dylan put any connotations on that.

However there’s something wrong with the way Norma views family. It seems her mother had died and the lawyer handling the late woman’s estate tried to approach Norma about an inheritance. But in spite of possibly gaining something if not needing some type of closure, Norma simply said she didn’t want anything. Then she told the lawyer not to contact her anymore.

So Norma is clearly oppressing something and sadly that’s how she’s raising her son Norman. Norman is still seeing Miss Blair Watson everywhere including at school. And though his mother told him it would be better to simply forget – he can’t.

And in fact he’s taking a special interest in the motel’s latest attendee.

A young woman, quite pretty, is in town because of her job. She told Norman that she works at parties. Expensive parties with lots of wealthy men. And that intrigues Norman.

Though, rather than protect her son or more importantly protect others from her son, Norma has hired Norman on as the motel manager. She told him it would be good for him. And he seemed to like the idea of being in charge.

Especially as working at the motel will mostly take up his time and his mother is willing to homeschool him to make sure he graduates.

Yet with all this extra time, the first place Norman wanted to run off to was to Emma’s. Emma has been getting sicker and sicker. So she hasn’t been keeping up with school. And Norman told her she should be homeschooled as well. Then he did the oddest thing – he told her they should date.

And Emma was just so excited by the idea that she didn’t question the “should”.

Elsewhere, though, Dylan finds himself asking nothing but questions. Earlier, he had run into his uncle/father on the road and he’s decided helping the other man out would eventually get Caleb to leave town all the quicker. Caleb at first claimed to have problems with his car but it seems he had figured out he was Dylan’s father and now he wants to connect. So Dylan is trying to do his best to get the other man to leave yet nothing is working.

Norma wasn’t the only one that was torn up by her mother’s passing. Her brother was just as hurt. And he told Dylan that’s why he wants to have a relationship with him.

He said he couldn’t go on if he didn’t have family.

But the family Caleb is describing is something Dylan never heard of. Apparently, Norma and Caleb were both destructive. Their father was abusive and their mother was clinically insane. She was constantly being treated for something or another. And even Norma later told Dylan that she only ever saw her mother happy the once.

So, according to Caleb, that’s when he and Norma turned to each other. He said they were all each other had.

And now that description best explains Norma relationship with Norman. After Norman’s father died, they were all each other. Since then, though, certain things have changed. One of them namely being Norman.

Subsequently, he had ditched Emma in the middle of their “date” in order to help out the woman that was renting a room. Yet both of them drove away in her car and only Norman came back. So did he kill again?

The sheriff has been taking it easy on with the Bates what with facing his own troubles in town with the locals, but now there’s an eye-witness that places Norman in the car. That is if Emma ever says anything!