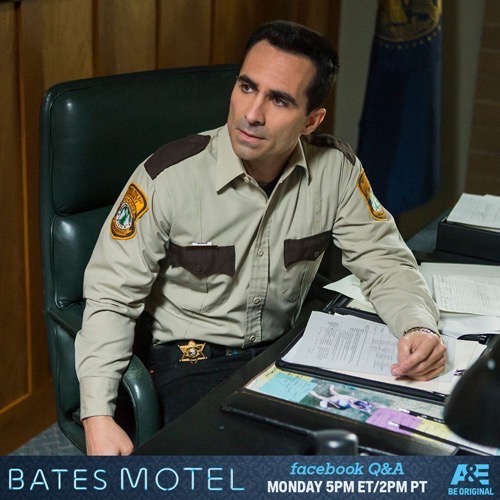 Bates Motel airs tonight on A&E with an all new April 20, season 3 episode 7 called “The Last Supper” and we have your weekly recap below. On tonight’s episode, Norma [Vera Farmiga] has one big mess to take care of upon her arrival home; Norman [Freddie Highmore] agrees to get help; and Dylan [Max Thieriot] receives shocking news about Emma’s [Olivia Cooke] health.

On the last episode, Norma considered a life outside of White Pine Bay, leaving Norman in a vulnerable position. As Dylan and Emma bonded over helping their friend through a rough night, Caleb made a difficult decision and Romero was confronted by a new threat. Did you watch the last episode? Did you miss it, we’ve got a detailed recap right here for you.

On tonight’s episode as per the A&E synopsis, “Norma considers a life outside of White Pine Bay, leaving Norman in a vulnerable position. As Dylan and Emma bond over helping their friend through a rough night, Caleb makes a difficult decision and Romero is confronted by a new threat.”

Dylan is in the motel office talking to Emma, she asks him if he talked to Norma about Norman yet and he says no. Dylan then tells Emma that he would like to buy her dinner to thank her for everything she did when her father walks in, he apologizes but says he wants her home because she is still recovering from the loss of that night’s sleep. Dylan apologizes, but her father says it is her fault not his, she doesn’t know her limitations. Emma leaves with her dad, but before doing so, he tells Dylan that Emma has not accepted her illnesss.

Bob goes to leave his house for a bicycle ride and notices a car at the end of the drive way. When he goes to tell the person to move the car, he sees that Marcus is inside, dead, a shot to the head with a note stuck to his chest that reads “I officially withdraw my candidacy for sheriff.”

Norma pulls up to the motel with Norman, her phone is ringing and Norman grabs it. James is on the phone, Norma grabs the phone and hangs up telling him that she will call him later. Norman announces that he is going to the office, Norma takes off into the house. Inside, Norma finds Romero and he wants to know why she hasn’t answered her text 36 hours. Norma shakes the whole thing off. Romero tells Norma that he thinks Bob tried to kill him. Norma says he should basically stop overreacting, it probably wasn’t Bob who tried to kill him. Romero wants to know where the flash drive is, Norma tells him it is in Dylan’s cabin.

Dylan heads over to see Emma’s dad who tells him that she won’t be around for more than a few more years because she is aggravating the time she has left. Emma is on a list for a lung transplant, but those don’t happen very often. But, for twenty thousand dollars, her name could be moved up on the list. Dylan tells him that he will be in touch.

Romero goes to Dylan’s cabin, finds Gunner there and wants to talk to him. Inside the cabin, Romero looks for the drive, he tells Gunner that he heard that he can open the files; Gunner denies it and Romero tells him not to make him hit him over the head with his gun.Gunner loads the flash drive and shows Romero the files. Romero grabs the flash drive and tells Gunner to tell Dylan that he’s got it.

At a shooting range, Romero walks up and Bob is busy shooting. He starts talking to Bob about the ledger on the file and finds out that his mother’s name is on it, apparently his father put it there over twenty years ago.

Dylan tells Norma he wants to talk to her about Norman. He explains that the night she was gone, Norman lost his mind, he blacked out for hours. He kept wondering around the house, he was not ok, he was hallucinating. He was making breakfast wearing her robe, he thought he was her, told him to go wake up his brother. Dylan tells her that they have been ignoring it for too long, they can’t dismiss it anymore. Norma says that she is keeping him home where he will be safe. Dylan is convinced they have to do something, they have to deal with it.

Romero is at a prison and sees his father, he asks him why his mother’s name is on the ledger; he calls him a dirty cop and wants her name off, or he will kill him. His father tells him to stop making such a big deal of it. Romero goes on to say that his father drove his mother to her death.

Caleb asks Dylan if he thinks there is any chance he could stop by the house, meaning to see Norma, Dylan says no. Caleb’s neighbor walks in, he brought them some pots and tells Caleb that they have things to go over. Caleb says that he changed his mind. Dylan is curious to know what it is about, the neighbor won’ t tell but says that it pays twenty five thousand. Dylan is actually interested in the job, but Caleb doesn’t want him to do it. Dylan tells his father that the money is for Emma, it is for a lung transplant, if she doesn’t get it, she will die. Caleb tells Dylan that he can’t do it, it is too risky and it is the end of the conversation.

James drops by the motel to see Norma, he is worried about her. Norma tells him that she is fine, she even spoke to her brother. James doubts that everything is fine, Norma tells him that everything is not fine, in fact she is really about Norman and wishes he would speak to him. James and Norma head downstairs in the basement, Norman says he doesn’t mind speaking to James, but she should leave. Norman is busy cutting through an animal as James is talking. Norman tells James that it might be really nice to help people. Norman says that taxidermy is peaceful, he shuts the world out – this annoying buzzing sound. Norman asks James how it was to sleep with his mother. James tries to deny it, but Norman says he knows his mother. Norman calls his mother a whore for sleeping with James and reminds him that he could lose his licence for doing it. James says it is not an appropriate question, Norman tries to probe further, James gets up to leave. James asks Norman why does he care that his mother might sleep with someone, then he asks Norman directly, does he want to sleep with his mother. Norman loses it and goes for Norman’s throat, he tries to kill him. James gets free and runs upstairs, Norma is there, he tells her that she needs to get Norman help, now.

Norma heads down to the basement and demands to know what happened. Norman tells her that he said horrible things that he can’t tell her, Norma hugs him and tells him that she is sorry. Norman then says that he misses her, how close they used to be. things are changing too fast. Norma assures Norman that everything is going to be ok, she is going to make some dinner and they will spend time together.

Norma is upstairs, Romero calls her and asks for her to pick him up – she questions if he is drunk.

Emma goes to leave the house, her father gets upset and tells her that she shouldn’t go. Emma tells him that she wants to spend time with Dylan for whatever time she has left rather than stay in the house. Her father gives her a hug and tells her that if he lets her go it is not because she won the argument.

Norma is there to pick up Romero, he is surprised to see she got herself a new car. Romero wants to be dropped off at home alone, but Norma says that he needs to be taken care of. Romero is in bed in one of her motel rooms, he confesses to Norma that one of the names on the ledger was his mother’s name, his father was using her name to share the drug profits. Norma says that she is sorry. The two have a close moment where they are holding hands, then Norma bends down and just when you think she is going to kiss him, she tells him she is going to go make dinner. Romero tells Norma that he thinks she is beautiful, she tells him that he is drunk.

Norma made dinner, she tells Dylan to stay and he tells her that he already has plans to take Emma out. Norma offers to have Emma over instead, she love to have her over for a big family dinner. Norma is outside, she is snipping herbs when she sees Caleb, she walks towards him and asks what he is doing there. Caleb tells her that he picked her some flowers that he knows she loves, he was just going to leave them with a note that basically says thank you for talking to him the other day, it meant a lot to him. Norma tells Caleb that they can’t be friends, he says that he understands. Caleb leaves the flowers and the note and turns to leave. Norma calls out to him and asks if he wants to stay for dinner, just for tonight.

Dylan and Emma are in the living room when Norma and Caleb walks in, she announces that her brother is staying for dinner then rushes into the kitchen. Dylan hugs Caleb and does Emma, then she goes to help Norma in the kitchen. Caleb is walking around, looking at all the family photos when Norma comes back in and offers wine. Caleb asks her to play something for him on the piano. Norma sits down and plays while she sings, her brother joins in with her. Emma walks in and smiles. Norman walks in and has this insanely angry face, he says to Dylan, “you brought him into our house.” Dylan says he didn’t, Norma did. Romero walks in, he tells Norma that he is going to leave and she refuses, she tells him that he is going to stay to dinner with the family. Norman is seated beside Caleb at the dinner table. Norma thanks everyone for being there, she tells them she had a dream when she was little of a dinner like this, Dylan makes a toast to family and friends. Caleb stands up and toasts his sister and thanks her for allowing them to be together. Everyone eats and leaves the table one by one until Norman is alone. Then we see Norman in his bed looking up at the ceiling with this weird look on his face. Then, Norman is in Norma’s room staring at her and he puts his hand on her after he rubs her thigh. Creepy!