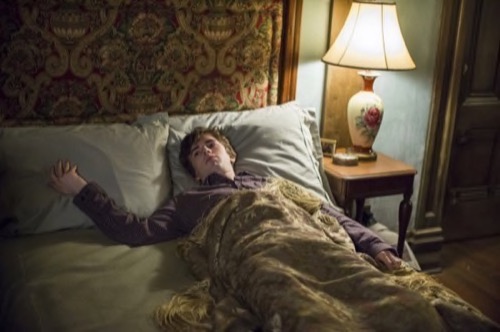 Bates Motel airs tonight on A&E with an all new April 13, season 3 episode 6 called “Norma Louise” and we have your weekly recap below. On tonight’s episode, Norma considers a life outside of White Pine Bay, leaving Norman in a vulnerable position.

On the last episode, Norma found herself in a rare position of control and turned to Romero for guidance. As the pair pushed the limits with the powerful Bob Paris, Norman and Dylan both came undone at the fallout of a secret, while Caleb considered an offer made to him by a surprising source. Did you watch the last episode? Did you miss it, we’ve got a detailed recap right here for you.

On tonight’s episode as per the A&E synopsis, “Norma considers a life outside of White Pine Bay, leaving Norman in a vulnerable position. As Dylan and Emma bond over helping their friend through a rough night, Caleb makes a difficult decision and Romero is confronted by a new threat.”

Norman is enraged, he is in the kitchen and smashing and throwing everything he can hold to while screaming, “she is never coming back, she hates me.” Dylan tries to get control over Norman and when he fails, he hits him and knocks him out. Norma is driving recklessly in the car, Dylan calls and she ignores it. Norma pulls over and looks at her phone, she sees that Dylan has left several messages, she gets out of her car, pulls out her gun, throws her phone on the ground and shoots it over and over again.

Romero comes out of a grocery store when a car starts following behind him and shoots several times at him. Romero then notices that he has been hit in the chest and falls to the ground.

Norma is now in the city, she pulls over her car and parks. She looks over at a store called New World, gets out of the car and goes inside. It is a clothing store, Norma chooses a few outfits then heads into the change room.

Dylan is freaking, he still can’t get in touch with Norma. Norman is in bed, he tells Dylan that Norma is not coming back, this what she does, she leaves. Norman says they moved many times throughout their lives, only now, she is leaving them. Dylan can’t accept it, he tells Norman that he is different, Norma wouldn’t leave him; she is just mad and will calm down. Norman tells Dylan that it feels strange, like he is outside his body. Dylan apologizes to Norman for hitting him.

Emma arrives and Dylan goes downstairs to meet her, he tells her that he is worried about Norman. He goes on to tell her what happened with Norma and says she freaked out on a whole new level, she has never left Norman before. Emma offers to sleep on the couch to help out.

Romero wakes up in the hospital, he is alive and surprised when he finds out that he has been shot. Romero asks her where his phone is, he starts to get frantic about the phone and demands the nurse to give it to him and go away. Romero calls Norma, only to get her answering machine. He leaves her a message saying that she could be in a lot of danger and that she should call him.

Norma comes out of the change room, she has new clothes on, goes to the cashier and pays for them. Norma then gets in her car and leaves, only to be followed by one of Bob’s men. Norma pulls up to a dealership, the salesman asks her what he can do for her, Norma tells him that she wants to trade her car in right now for something new. In her new car, Emma heads to a hotel and rents a room, goes inside and collapses on the bed. Norma then starts to think back to when she was younger.

Meanwhile, Norman has awaken and is looking for Norma in the house, he walks to her room and calls for her. Norman to see the room self destruct, then he awakens – he is still in his bed and never actually got up.

Dylan goes to see Caleb, he wants to talk to him. He tells Caleb that Norman didn’t tell Norma about him, he did and he is going to have to leave. Caleb tells Dylan not to worry about, he will clear out. Dylan leaves and Caleb is left alone, he starts to cry.

Norma is still in the motel, she gets off the bed and leaves, goes to a bar and orders a drink. In the bar, a guy walks up to her and starts to talk to her, his name is Taylor and he tells her that she is pretty. The two get up and dance together. He asks her if she is always this quiet, she says she ran out of her wedding today, she has a problem with commitment – she then tells Taylor that she killed her husband to be. Taylor asks Norma to his truck for a smoke and once inside the two start making out. Taylor starts to undo his pants- Norma jumps out of the car. Taylor starts screaming at her and tells her she is freaking messed up. Norma gets in her car, she sits there and cries.

Norman is working on his taxidermy, splitting a bird’s stomach open when the thing start to move, it is alive. Norman then kills it, puts his head down on the table beside it and starts to pet it.

Dylan and Emma are there beside Norman, they find him with the bird in his hands and a strange look frozen on his face. Emma thinks they should call an ambulance but Dylan tells her that it has happened before, they just need to wait it out.

Norma calls James, she tells him she is having some kind of break down and wants to go over to his place.

At home, Norman is walking up the stairs to his room chanting “I love my mother,” with Emma and Dylan behind him. Emma starts coughing, she is having some kind of attack and asks Dylan to bang on her chest so she can breath again. Dylan helps her and then he apologizes for letting her be a part of what is going on with Norman.

Norma arrives at James’ house, she is drunk.

In the hospital, Romero is visited by Marcus, he tells Romero that Bob wants to kill him because they are finished with him but if he will team up with Marcus, then Marcus will save him.

Marcus goes to leave the hospital when Romero shows up beside his car and shoots him dead. Romero gets inside the car, their is blood everywhere, he drives off with Marcus’ dead body and Romero in his hospital gown.

James asks Norma what happened, she tells him that her kids want her to talk to her brother who was horrible to her when she was younger. James assures Norma that she is safe with him. Norma tells him that she doesn’t know if she can continue living, it is too tough. Norma tells James that her son isn’t normal, there is something wrong with him. Norma goes on to tell him that Norman has these blackouts and he loses himself. James is wondering why Norma feels like she has to keep Norman’s condition a secret, she starts to cry and break down. She then tells James that her husband didn’t die in an accident, James guesses that Norman did it. Norma tells him yes but it was an accident. Norma then can’t believe that she told James what she did, she starts to freak out and goes to leave. James goes to get Norma and picks her up, he carries her to the bedroom and tells her it is going to be ok. Norma kisses James and he tells her they can’t do this because she needs him more as a therapist and can lose his licence. The two continue to make out, James obviously forgets what he doing.

Norman is up, making breakfast, wearing Norma’s robe and acting funny. Dylan walks in and is surprised to see Norman acting like Norma, he tells Dylan that Norman is still in bed. Dylan is shocked, he stares at Norman like he is a ghost.

Norman is back in bed, Norma is looking over him and Dylan walks in. Emma announces that she is going home to shower and change, Dylan tells her that he can’t thank her enough. Dylan is exhausted, he lays down beside Norman to rest.

Norma is up, she puts on her clothes and tells James that she is going home. James tells her that she has to stop and take care of herself, think of her own needs.

Caleb is standing beside the water when his neighbor walks up and says hello. He then asks Caleb what happened, he can see something is wrong – then says he wanted to give him another shot at that driving gig if he still wants it. Caleb says that he would be interested but needs to know exactly what it is, the neighbor won’t tell him, in fact he says that he will only tell him when he needs to know.

Norma is home, she finds her two boys in bed and shakes them awake. Norma tells them that she is going to the farm to go speak to their uncle, the damage is done. Everyone gets in Norma’s new car, the boys are surprised to see that it is new. At the farm, Norma gets out of the car and storms over to Caleb’s van. She stares at him with her boys looking on, she begins to cry and then goes to walk off. Caleb drops to his knees and cries that he is so sorry. Norma holds on to him and hugs him. Norman looks on and he is mad, he doesn’t like what he sees.