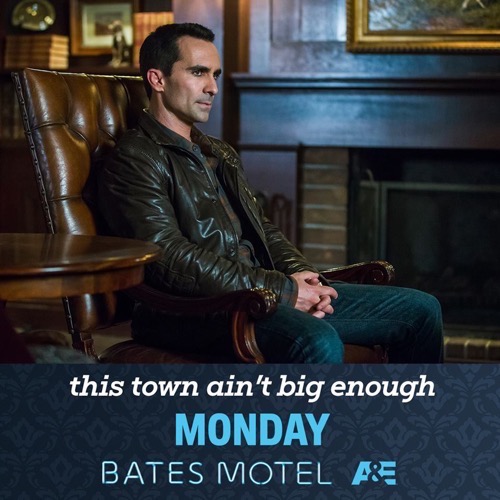 Bates Motel airs tonight on A&E with an all new April 6, season 3 episode 5 called “The Deal” and we have your weekly recap below. On tonight’s episode, Norman [Freddie Highmore] and Emma [Olivia Cooke] take a day off from the motel; Romero begins to dig into two mysterious deaths in White Pine Bay.

On the last episode, Norman and Emma took a day off from the motel. Romero investigated two mysterious deaths in White Pine Bay. Norma went back to school. Buried secrets unraveled for Caleb and Dylan. Did you watch the last episode? Did you miss it, we’ve got a detailed recap right here for you.

On tonight’s episode as per the A&E synopsis, “Norma finds herself in a rare position of control and turns to Romero for guidance. As the pair push the limits with the powerful Bob Paris, Norman and Dylan both come undone at the fallout of a secret, while Caleb considers an offer made to him by a surprising source.”

Dylan slept in his truck, a woman wakes him up and tells him he has to move.

Norma is seen driving her car when someone starts revving their engine behind her and driving really close behind her, all of a sudden the car pulls ahead of her and cuts her off. Norma swerves and her car ends up in a field of manure, good thing she has boots on. The car who cut her off is back, a guy comes out and says “you are lucky you are not dead Norma Bates.” Norma then threatens to call 911 and the guy says she better call Bob Paris instead because she has something that belongs to him. Norma says she doesn’t know what he is talking about and she is going to call Romero, the guy says Romero can’t save her and she better make the call soon to Paris.

Romero is at the marsh and sees Stanley digging for clams, he asks him where he thinks the girl was dumped. Stanley doesn’t have much to say, Romero goes to leave. Stanley then says that about five days ago he found a guy bird watching in the marsh and he didn’t have a camera or binoculars.

Norman is in bed, Emma is there and when he wakes up she tells him that his mom asked her to stay with him. Norman tells Emma that he found his mother’s brother was at Dylan’s farm and he told his mother. Emma asks Norman if it was really necessary to do that, after all, it is Dylan’s father.

Dylan arrives at the motel, he sees Norman who tells him he is sorry but he had to tell Norma about her brother.

Dylan gets a call from the hospital telling him that Norma is there and was in an accident. At the hospital, Dylan see Norma and tells her that he is sorry, she asks about what. Norma doesn’t seem to understand why he is saying sorry, she tells him that she was run off the road. Norma goes on to tell Dylan that the motel might go under, she has no money and that Norman is getting worse. Furthermore, Norma thinks the flash drive is worth a lot of money and can’t give it up.

Romero goes to see Bob Paris who tells him that he wants his flash drive back – Romero asks if it is worth two women’s lives. Paris tells Romero that he leaves him with no choice but to bring Marcus Young in town to take his job – the only way out of this is to go to Norma Bates and get the flash drive, he is pretty sure she has it.

At the motel, Dylan drives up and goes into the office to see Norman and tells him to stop it, he never told Norma. Norman swears he told Norma. Dylan tells him that he is going to tell Norma himself about her brother being at the arm and he just needs to stay out of it. Meanwhile, Caleb is seen looking at a photo of he and his sister when they were younger.

Norma is at a bus stop when James Finnegan drives up and offers her a drive.

Caleb is in the forest chopping down a tree when he collapses on the ground, his weird neighbor, Chick Hogan, shows up and asks if he wants to hug out this bad thing that happened to him. Caleb tells him to go away but Hogan won’t take no for an answer and tells Caleb to go with him to his cabin where he has whisky. Hogan tells Caleb that he has a job that maybe he might be interested in, he needs a driver, it pays good, 25 large but it’s not without risk and he looks like a guy that can handle risk. Caleb tells him that he is turning over a new leaf, he has his son now. Hogan says “leaves are leaves and money is money” and will wait till the end of his week for his answer.

Norma is sharing a meal with Finnegan and tells him that maybe he could help her with some difficult things she is going through right now, he gives her his card and tells her to call him anytime. Norma asks him if he is attracted to her. Finnegan is surprised and wants to know where that came from; then he tells her that he is attracted, a lot. At the motel, Norma leaves Dylan a message and Norman walks in. He asks Norma if she was wearing the same outfit this morning, she says yes. He then asks her if he talked to her and was she wearing the blue dress he really likes, she says no, it was probably just another black out. Norman hugs him and tells him that everything will be ok, she will always be there for him. Norman then leaves the kitchen and goes into Norma’s bedroom, he finds the blue dress, takes it out of the closet and smells and hugs it. When Norma calls Norman to dinner, he runs to his room with the dress and hides it under his bed but part of the dress is showing.

Gunner calls Dylan and tells him he was messing with the timer and found this flash drive, he put it in his computer and was able to encrypt the files.  The next morning, Dylan goes to see Norma and tells her that he was able to access the files, it is investment data of 15 million dollars probably money that was stolen or illegal from the club. Dylan begs Norma to tell Romero, she doesn’t want to.

Romero is on a dirt road, he pulls up to a car and shouts at Clay to get out of the car, he doesn’t. As he gets closer to the car, he sees blood and realizes that Clay is dead.

Norma knocks on Romero’s door, she asks him if she can trust him and he says he will do his best. Norma tells Romero that she has “it” which contains a business ledger worth 15 million with all the big names of the town on it. Romero wants her to give it up, she won’t, she wants to meet with Bob Paris and wants something out of this. Romero tells her that they will kill her.

Romero is at Paris’ office with Norma. Paris thanks Norma for coming to his office, she starts by telling him that she may have something that he wants back, a flash drive. Paris is smiling, Norma tells him that the Bypass is going to ruin her business and she has no power in the city. Romero tells Norma to cut to the point. Norma goes on to say that the business of hers is really important to her and her son and since she has this thing that he wants back, she could perhaps ask him for something in return – destroy the bypass and put up a large billboard and a pool. Paris looks dumbfounded, he asks her why he should believe she has the drive; she tells him about the names on the list. Norma tells Paris that if anything happens to her or her family, she will go directly to the FBI. Paris is shocked that she wants all this stuff and she is not going to give him back his flash drive. He tells Norma that he hands it to her, she got him, well done, they have a deal all the while smiling. This was too easy…..

Dylan goes into the basement and finds Norman working on an animal, he tells him that he will speak to Norma about Caleb being at his place and it won’t be pretty, so if he wants to clear out, he understands. Norman tells Dylan that this is his fault and will go with him to tell Norma, it is partly his fault because there is something wrong with him, he wants to destroy Dylan because he was getting closer to Norma and he doesn’t want to be that man. Dylan tells him thank you.

Norma arrives home to find Dylan and Norman sitting at the kitchen table and asks them what is going on. Dylan begins by telling Norma that Caleb is in town, he has been in town and is at his farm. Norma looks worried and shocked, Dylan says that he showed up just after Norma’s mother died and offered him a bunch of cash but he wouldn’t take it. Caleb had no place to stay so he let him stay with him. Dylan goes on to say that Caleb feels really bad about what he did, he is tormented and just wants to talk to Norma, tell her that he is sorry, so sorry that it ever happened. Norman tells Norma that she has to try and understand that Caleb is Dylan’s father. Norma gets up from the table and walks away. Upstairs, Norma is packing her bag, Norman and Dylan hear all the noise downstairs and rush up to see her. Norma is furiously packing all of her things and Norman screams for her to stop it because she is scaring him. Norma grabs her gun from underneath her mattress and shouts, “leave me the hell alone.” Norman runs after her and Dylan tries to stop him, Emma walks up and asks what is wrong, Norma is already in the car and drives off. Norman starts screaming “MOTHER”.