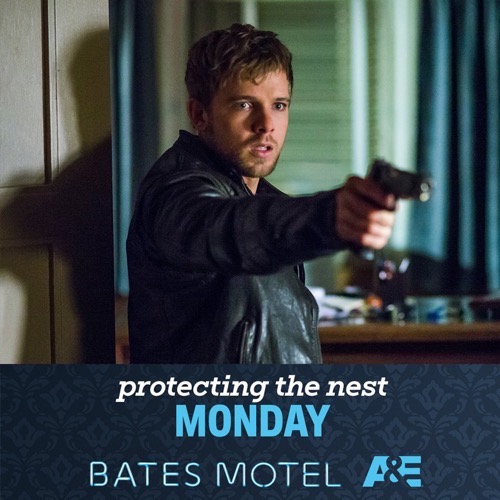 Bates Motel airs tonight on A&E with an all new March 30, season 3 episode 4 called “Unbreak-Able” and we have your weekly recap and spoilers below. On tonight’s episode, Norman Bates [Freddie Highmore] and Emma [Olivia Cooke] take a day off from the motel; Romero begins to dig into two mysterious deaths in White Pine Bay; Norma returns to school; and buried secrets start to emerge for Caleb and Dylan. [Max Thieriot]

On the last episode, Norman and Norma grew apart as Norman and Emma grew closer. Norma balked when Romero asked Norman some tough questions Romero met his competition for re-elections. Did you watch the last episode? If you miss it, we’ve got a full and detailed recap right here for you.

On tonight’s episode as per the A&E synopsis, “Norman and Emma take a day off from the motel. Romero investigates two mysterious deaths in White Pine Bay. Norma goes back to school. Buried secrets unravel for Caleb and Dylan.”

Norman is in bed, he calls for his mother. He then gets up and is walking through the hallways, Norma is not in her bed, but the police are outside and there is Annika’s body on the ground. Norma is in the office, a paramedic is taking her blood pressure because she passed out beside the Annika when she died in her arms. Norman shows up at the scene and asks Norma if he did, did he kill her. Norma tries to calm him, Dylan walks up and Norma tells him to take Norman into the house because he is very upset and shouldn’t see this.

Norma is speaking to Romero, tells him that Annika drove up and was already shot, she died in her arms. Norma says she has never seen the car before that Annika drove up in. Romero asks what was wrong with Norman when he showed up at the scene, Norma says he was having a normal reaction to seeing a guest of theirs dead on the ground in front of the motel. Romero doesn’t get it, why would Annika make the effort to drive to the motel after she had been shot.

Norma goes to check on Norman who is resting in bed, Dylan asks what is wrong with him and Norma says he had a bad episode. Norman says he blacked out and then Annika is dead. Norma tries to reassure Norman that he did nothing, he is not responsible for Annika’s death. In her room, Norma is changing and pulls the flash drive that Annika gave her out of her bra. She goes to her computer, only to find out that she needs a password to access the files on the drive.

The next morning, Norman asks Norma if she knows why Annika was trying to return to the motel. Norman confesses that he spoke to Annika about how good a mother Norma was and that she and he were really close. Norman then asks Norma if she still likes him; he thinks things are different for them since Dylan moved in. Norma reassures him that things are the same between them, then goes back to making breakfast.

Norma is all dressed up and at a coffee shop, she approaches a young man and asks him if he can help her with her flash drive that is password protected which belonged to her mother who passed away. The guy tries to access the files and tells her it is a really good program and he can’t override, he looks a little surprised that she claims this drive belonged to her mother.

Romero finds out that Annika was shot 20 minutes before she showed up at the motel and the car she was driving, belonged to the other girl that was found dead in the tidal marshes.

Caleb is loading his truck and notices Norma putting in gas in her car, he ducks out of sight so she can’t see him.

Emma is studying with Norman, he is having a hard time staying focused. Norman tells her that Annika’s death is bad for business. Emma suggest they go away for a bit for a change of pace, Norman see his mother walk in a grabs Emma for a long and passionate kiss.

Romero goes to see Bob, he tells him that he wants to talk to him in a more formal setting because the two dead girls were connected to his club. Bob asks if the dead girl had anything on her, Romero wants to know what he is talking about, but Bob doesn’t tell anymore.

Norma is at the library in the computer code section and meets up with her teacher, James, who is surprised to find her there; she says it is because she wants to know what her son is doing on the computer. They go out for coffee, Norma starts talking about Norman, says things are different now with him; she doesn’t trust him as much and it makes her feel really lonely. Norma starts crying, says she is being stupid.

Norma drives up to the motel and finds Romero in Annika’s room going through her things. He then asks Norma if Annika had anything on her, Norma says she doesn’t know. Norma leaves him and says she is going to make dinner, Romero asks her why she is lying to him, she asks why he is lying to her. Romero says it is his job not to reveal everything and she says he gets a gold star.

Norma arrives in the kitchen, Norman is cooking for a picnic tomorrow and Norma tells him that she would have been delighted to go but she is busy. Norman is quick to tell Norma that the picnic was not intended with her, but with Emma. Norma looks very disappointed. Norma starts to bang pots and pans, Norman asks her what is wrong. Norma tells her that what he is doing is wrong, he using Emma to get back at her because of some childish nonsense that she likes Dylan more than him. Norma then tells Norman that he can’t sleep with Emma, she is ill and if he does, she will kick his ass to the moon and back. Norman gets up to leave and tells Norma that she doesn’t need to explain that to him.

Norma goes to see Dylan, she shows him the flash drive that Annika gave her before she died. She goes on to tell him that she thinks it is really important and Romero is looking for it. Dylan tells her not to tell anyone else because it could be really dangerous. Norma says she won’t tell anyone, she realizes the same thing and this is why she didn’t tell Norman. Meanwhile, Norman has his bedroom lightly opened and he is hearing the whole conversation.

Norman and Emma are out walking in the woods for their picnic. Emma sees a cabin and suggest they go check it out. Once inside they find it is deserted.

Norman and Emma are in the cabin, they have built a fire and are talking. Emma starts kissing Norman, putting the moves on him. Norman tells Emma that they should stop, he doesn’t want to hurt her. He tells Emma that Norma said they shouldn’t have sex. Emma is furious, she says that this is insulting and she knows what is good not good for her. Furthermore, she didn’t think Norma was going on the date with them.

Caleb is working on the garage, Dylan drives up and gives him crap for going into the city and risking Norma seeing him. Caleb and Dylan get into a screaming match, Caleb falls off the roof and cuts open his hand. Dylan wants to take him to the hospital, but Caleb refuses. Dylan helps him up and tends to the cut on his hand. Caleb starts talking about Norma, tells Dylan that she meant the whole world to him. He claims he loved her, he hates himself for it, but in his mind he didn’t rape her and wants to say sorry to her.

Dylan is back at the motel, he sees a car parked out front and some ransacking the office – he pulls his gun. He finds some of Bob’s guys in there who tell him that there is something of theirs that is missing. Dylan tells them to leave and if he ever sees them again, he will kill them.

Norma is in her room, still trying to access the drive. Dylan storms into her room, tells her that they should throw out the drive. Norman walks in and asks what is going on. Norma won’t give in, she tells Norman to stop acting like a child. Dylan is very upset, he wants the flash drive.

Dylan leaves the room and goes to take his keys, Norman is there and asks why he is lying to him. Dylan tells him to stay out of it, it doesn’t concern him. Dylan leaves.

Norman follows Dylan. Dylan hides hides the flash drive inside the timer. Caleb walks in and looks a little strange, Dylan gives him a hug. Outside, Norman walks up and asks Dylan what the hell is going on. Norman sees Caleb, he asks Dylan if this is what he and Norma were whispering about, does she know about this. Dylan tries to explain – Norman says he is not the one harboring Norma’s rapist. Norman runs off and Dylan runs after him. Dylan is on top of Norman, Caleb tries to pull him off. Dylan begs Norman not to tell Norma, everything he has worked for will be destroyed. Norman says that he already destroyed everything and Norm deserves to know. Dylan begs him one more time not to tell, but Norman gets up and drives away.