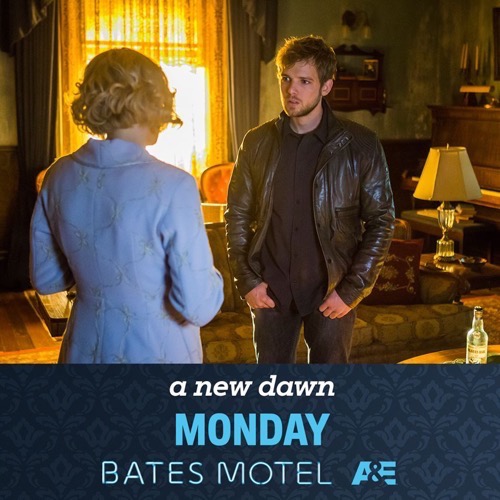 Bates Motel airs tonight on A&E with an all new Monday May 11, season 3 finale called “Unconscious” and we have your weekly recap below. On tonight’s episode, Norma [Vera Farmiga]  hits a breaking point with Norman’s [Freddie Highmore] issues. Emma has a surprising reaction to seemingly positive news.

On the last episode, Norman spent the day with a surprising visitor; Norma struggled to keep secrets under wraps; and at the farm, Caleb helped Dylan follow through on a good deed, but there was a cost. Did you watch the last episode? Did you miss it, we’ve got a detailed recap right here for you.

On tonight’s episode as per the A&E synopsis, “Norma hits a breaking point with Norman’s issues. Emma has a surprising reaction to seemingly positive news. Romero finally chooses sides, sealing his fate in town. Caleb makes a decision that will uproot his new life.”

Tonight’s episode is going to be a great one and you’re not going to want to miss it. Bates Motel airs on A&E at 9:00 PM EST, while you wait for our recap hit the comments and let us know how excited you are about the season 3 finale.

There is a guitar on the table and Dylan asks Norma where it came from, she says it is from Caleb, he left it for him. Norma tells Dylan that she has been looking into a mental hospital for Norman, she is going to go visit it.

Romero walks into roll call, they are going after Bob Paris and Romero looks disturbed.

Norma is all dressed, she looks in on Norman who appears to be sleeping.

Caleb camped out for the night, the next morning Dylan finds his spot.

Emma’s father calls to her, he tells her that they may have a set of lungs for her and they will know for sure in the next few hours. Emma asks him how she got to the top of the list so fast, her dad says he guesses that she was a good match. Emma looks worried, her dad tells her not to worry, it will be fine, this is exciting.

Norman is awake, he heads to Bradley’s room with some food only to find the room empty. He heads into the bathroom and sees that the window is open.

Norma has arrived at the mental hospital, at first glance it appears to be quite a normal place. Norma sits down with a woman who wants to know Norman’s condition and referring doctor. Norma really can’t answer the questions, she tells the woman that she is just looking into this right now, she hasn’t made any decisions. Norma asks if she can visit him, the answer is yes. The cost of the hospital is covered by insurance and varies depending on the condition of the patient. The minimum charge is $529 a night for room and board and then there are treatment charges, for most patients it ranges from $20 – $40 thousand dollars a month, the key is your insurance. Norma tunes out, she looks stunned at the cost.

Dylan calls his dad, he leaves him a message telling him off that he left.

Emma hears her father on the phone, it looks like she is going to have to leave quick to get her new lungs. While he is distracted, Emma leaves the house.

Bradley returns home and steals money and jewelry from her mother, then smashes some of the glass door and chandelier.

Emma’s father calls Dylan, he can’t find her and they need to get going if she is going to get her new lungs. Dylan sets out to look for her.

Dylan ends up at the farm and finds Emma standing near the water. Dylan tells her that she needs to get out of Portland. Emma tells Dylan that she doesn’t want to die, people reject lungs every day and she doesn’t want to waste what little time she has left on this earth. Furthermore, she doesn’t want to be poked and prodded worrying everyday if she is going to reject her new lungs. Emma apologizes for being ridiculous and crying, Dylan calls her a warrior. Emma kisses Dylan, he kisses her back and then smiles. The two try to gain their composure, he says he is going to be known as the guy who hit on he before she got her lung transplant. The two hug.

Bradley is back at the motel, she tells Norman that she broke into her mom’s house and they should leave soon, get on the road. Bradley asks Norman if he can be ready to go that night, sneak out while his mother is asleep, he doesn’t answer. Bradley pleads with him to leave, he says that he doesn’t know how he can leave his mother. All of a sudden, Norma drives up to the motel, he announces that he has to leave. Bradley tells Norman that she is leaving after dark and he knows where to find her if he changes his mind.

Norman leaves the room and runs up the stairs to the house to see his mother. Inside, he asks his mom where she was and she says she ran errands. Norma asks Norman to talk for a minute. She tells him that she is worried about him, the blackouts are getting worse. Norman tells her that he is not in school anymore and he doesn’t drive. Norma explains that she thinks that he needs more help from real doctors, she wants him to be safe. There is therapy, there is medications and they have never looked into it. In fact, she has been very scared to looked into this, but she is more scared not to. She goes on to say that there are places that can help him and she went to one. Norman is furious, he tells her that he is glad they had this talk, he sees where she stands, she has given up on him. Norman leaves the room and goes upstairs.

Romero is at the station, just looking ahead clearly filled with mixed feelings about what he did.

Norma is standing by the window, looking outside when Romero drives up. He gets out and tells Norma that he did the right thing and he stands by that, she thanks him for telling her that. Romero says that he is sorry that he couldn’t protect her, he wishes it was different. Norma tells him that it is not his fault, it is bigger than the two of them. She tells Romero that she is so scared, she thinks her son is broken and he is the dearest person and if they take him away just for defending her, it will kill her. She says, maybe fate wins here, we’re all doomed in the end anyway. Norma thanks him for stopping by and heads back to the house.

Romero is in his car driving, he calls Bob Paris and tells him the DA is heading right over to his house to arrest him, he less than ten minutes and better get the hell out of there. Bob asks why he is telling him this, Romero says because his getting arrested is not in his best interest.

The DA arrives at Bob Paris’ house with Romero, nobody is there.

Down by the water Bob Paris is toting a back pack when Romero is suddenly there. Bob tried to go for his gun, Romero tells him that if he moves he will shoot him. Bob asks Romero to go with him, leave the town, Romero says that is not the way this is going to go. Bob says that the moment he leaves he will never mention this town again, he will change his name and even forget Norma Bates. Romero says that he can change his name, but he can’t change who he is – in the end, he killed those two girls. Bob tells Romero that he is just like his father, Romero pulls out his gun and shoots Romero several times until he is clutching for his throat for life.

Norma goes upstairs, she knocks on Norman’s door then opens it. She asks him what he is doing, he says that he is leaving. Norma asks him questions about who and where he is going. Norman shouts that he doesn’t need her, he loves her, but has become to much of a burden. Norman shouts and shouts at her that he is leaving with Bradley Martin, Norma tells him that Bradley is dead, she committed suicide. Norma struggles with Norman over his suitcase on the stairs and ends up falling down them. Norman goes to leave and Norma hits him over the head unconscious. Norma drags Norman’s body to the basement and ties him up while he is passed out. Norman wakes up, but Norma runs upstairs and locks the basement door behind her. Norma calls Dylan and leaves him a message to come home as soon as possible because Norman has lost his mind. In the basement, Norman is wiggling out of the ties on his hands and legs. Dylan arrives home, Norma tells him what she did. Dylan goes down the basement stairs and calls for Norman, he is not there and the ties are on the floor. Dylan continues to call out for him, he tells Norma that he is not there. Norma is shocked that he is gone and tells Dylan that Norman was going to leave with Bradley Martin who is dead. Dylan tells Norma about Bradley actually not being dad, she tells him that they need to go find Norman right away.

Norman catches up with Bradley, he asks her where they are going and she says they will just see how long the car lasts. While driving, Bradley tells Norman that she is really proud of him. All of a sudden, Norman envisions his mother in the back seat and she asks Norman to talk to Bradley. Norman demands that she pull over the car for his mother to speak to her, she is puzzled and wants to know what is going on. All of a sudden we see what looks like Norma, but is actually Norman, he gets out of the car and attacks Bradley, he smashes her head on a rock until she is dead then screams into the night, “mother what have you done.”

Norman drives to the bridge, he opens the trunk and Bradley’s dead body is inside. He tells her that he is sorry, sorry that she did this to her. Then he puts the car into neutral and lets it going into the river; it sinks.

Norman see his mother’s vision behind him, she tells him that Bradley got what she deserved and they belong together. They hug and his mother reassures him that everything will be ok, it will be their little secret and he has to promise not to tell anyone. She tells him that they will always be together. The cameras pull away and we see Norman standing there in front of the water all by himself, mother is not there.