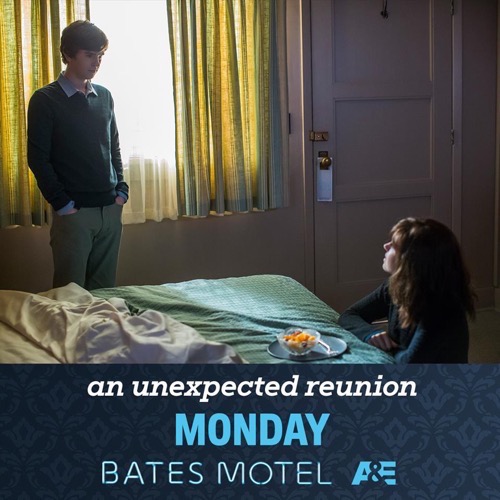 Bates Motel airs tonight on A&E with an all new May 4, season 3 episode 9 called “Crazy” and we have your weekly recap below. On tonight’s episode, Norman [Freddie Highmore] spends the day with a surprising visitor.

On the last episode, Romero confronted Norma about new information that was recently come to light; at the same time, Emma made a decision about her future with Norman, who was left reeling from a recent discovery; and Caleb and Dylan accepted a job that came with some risk. Did you watch the last episode? Did you miss it, we’ve got a detailed recap right here for you.

On tonight’s episode as per the A&E synopsis, “Norman spends the day with a surprising visitor; Norma struggles to keep secrets under wraps; and at the farm, Caleb helps Dylan follow through on a good deed, but there’s a cost.”

RECAP: Norman is on the bridge, he sees Bradley and asks her why she is there, why she looks like this. She says that her life has been a living hell since she last saw him, she ran away. Norman asks why she returned, she says it is because it is too hard to live without her father – she doesn’t want to be dad anymore, she wants to be home. The two drive away.

Norma drops by to see Bob Paris, he asks her how the pool is coming. Norma tells him that she will give him the flash drive and what Dr. Finnegan told him was a lie. Bob says he had an investigator look around, Norman has an interesting history. Norma tells him that she will do anything he wants, but he has to bring an end to this. Bob tells her that she doesn’t call the shots anymore, bringing him the flash drive would have been in her best interest, but Romero may have beat her to it. In fact, she may think he is the bad guy, but he thinks she may be worst than she is. Bob ends there conversation by warning her not to fall into her pool, she may never get out.

Caleb is back and his first stop is to go see Chick – he tells him that he set him up and Dylan almost got killed. Chick apologizes and says that he is glad Dylan didn’t get killed but for all he knows, Caleb sold the guns to someone else in Canada. Chick offers Caleb a drink to talk it out, Caleb lunges for him. The two get into a fight, Caleb beats the crap out of Chick and tells him that if he ever goes near his son again, he will track him down and kill him.

Dylan has returned to the motel, he sees the hole and asks Emma what it is, she tells him it is for a pool, Dylan calls it a bomb crater. Emma asks how the delivery went, Dylan says no good. Dylan excuses himself to go have a shower, Emma wants to know what he needed the money for, he doesn’t tell her.

Norman drives into the forest with Bradley, he tells her not to let his mother see her because she thinks she is dead.

Norma goes to see Romero, she demands to know why he hasn’t returned her calls. Romero takes her to a private area, she wants the flash drive back to get out of this mess. Romero tells her that she is out of it and they are done talking about anything.

Norman is with Bradley, he is wondering how is going to tell Norma that she is alive.

Dylan sees Caleb all beat up and asked him if he killed Chick, he says no, he just beat him up and he bad news is that he will probably come looking for him with the police. Caleb tells Dylan that they earned the money, Chick tried to screw them over, he had to get it. Caleb is leaving, he is going to hide out and suggests that Dylan go back to the motel with his mother.

Norman arrives home and hears Norma in the basement, he runs down and asks her what the hell she is doing. Norma is putting everything in garbage bags and she says that they are getting rid of everything because if anyone ever investigated Norman it would look pretty weird that he has a hobby of cutting up things. Norman is upset, he can’t believe that she wants to trash all the things that he loves. Norman tells her that the only one that doesn’t look good in this, is her. Norman says that he always loved her, she is the first thing he thinks of in the morning and the last thing he thinks about when he goes to bed. But, he is not the one running around acting crazy and sleeping with her therapist, how does he know that it wasn’t her that killed his father. Norma is upset, she yells at Norman and tells him to go upstairs and she is going to make sure they are safe whether he likes it or not.

Bradley is in her car, she sees her mother with a new man outside their house, she replaced her dad already. Bradley goes into the house after they drive away, she tells Norman that the house looks different, like she never lived there. Upstairs Bradley notices that her mother changed everything in her room and in Bradley’s old room, she redecorated and changed it into an exercise room. Norman and Bradley leave the house and get back into the car, he holds her hand while she cries.

At the station, Romero has a visit by a special agent, it appears that one of the names on the flash drives was his deceased mother. Romero explains that it was his father, he put it in his mother’s name to cover up what he was doing illegally. The special agent seems surprised that he became a sheriff given his father’s criminal past, furthermore she is surprised that he wouldn’t know anything about the wrong doings in the town.

Dylan goes to visit Emma’s father, he hands him over fifty thousand dollars and asks him if it is enough to bump Emma up the transplant list. Her father says that it is more than enough, Dylan makes him promise that he won’t tell Emma it was from him.

Dylan goes up to Emma’s room to visit her and finds her in bed – she awakens. The two start talking, he tells her that Caleb had to leave for a while to handle some business and he kind of got used to him being there. Emma confesses that she knows Caleb is his father, Norman told her last summer. Emma tells her that she doesn’t judge him and understands that he would want to be close to his dad. There is chemistry between the two and just when you think Dylan is going to make a move, he leaves.

Norman and Bradley are sitting on the roof of her car talking, she tells him that she doesn’t want to be alone. Norman tells her that he has to go home, Bradley asks why Norma doesn’t like for him to leave the house – he says because she thinks there is something wrong with him. Bradley is curious, she asks if there is something wrong with him, he says yes and walks away.

Romero arrives home and hears someone rummaging through his place, he draws his gun and enters cautiously. Once inside, he finds Norma. She tells Romero that her son is not going to prison because of some rich asshole – she demands to know where the flash drive is. Romero tells her that he handed it over to the feds, he is done with this town and down with everyone in it. Norma yells at him and asks why he did it. Romero demands to know what happened to her husband, the truth. Norma tells him that he was abusive, he beat her and she hit him on the head with a blender. Romero doesn’t believe her. Norma starts freaking out and screaming that she hates him. Romero grabs her to calm her down and stop her from being crazy, the two are very close and almost kiss – she tells him not to touch her, she leaves

Norman is home, she starts to shovel back the dirt into the hole when she sees a camper drive up – she screams out into the night,”go to hell you sons of bitches, I will haunt your asses till I am dead.” Caleb comes out of the camper, he asks her if she is alright. Norma sees his face all beat up and when he asks her if she is alright, she tells him not to ask her and she won’t ask him. Caleb tells her that he is there to drop off something for Dylan before he leaves, Norma is surprised that he just wouldn’t give it to her himself. Caleb says that before he leaves he has to tell her something about Norman, he came to his room one night and told him how angry he was that he raped her. Then he realized that Norman actually thought he was Norma. The truth is, Norman is going to hurt someone and he hopes that it is going to be her. Caleb says goodbye and leaves.

Norman is back to see Bradley, he has brought her some clean clothes of his. Bradley announces that she has decided to leave tomorrow and asks if he wants to go with her, he says that he can’t. She wants to know if it is because there is something wrong with him, he says partly and because his other is upset. Bradley takes some pills, she tells him that it helps her sleep. Norman explains whats wrong with him, the blackouts. Bradley asks him to remember the night he came to her door and he told her he loved her, she didn’t see it back then, but she was an idiot. Bradley goes in for a kiss, the two end up on the bed making out when he sees his mother sitting on a chair beside the bed; she calls his name, Norman looks over at her and then tells Bradley that he can’t. Bradley says that she just wants to be close to him, Norma calls out to Norman again, he put shis shirt on and runs out of the motel only to see his mother standing by the office; she tells him that she saw what he was about to do in the room and wants to know what he is going to do about the girl. Norma tells him that the bitch has always been a pain in her ass, she thought she was dead. Furthermore, they have enough trouble on their plate and they don’t need any more. Norma takes Norman by the arm and guides him into the house, then we see that he is walking alone, mother is not there.