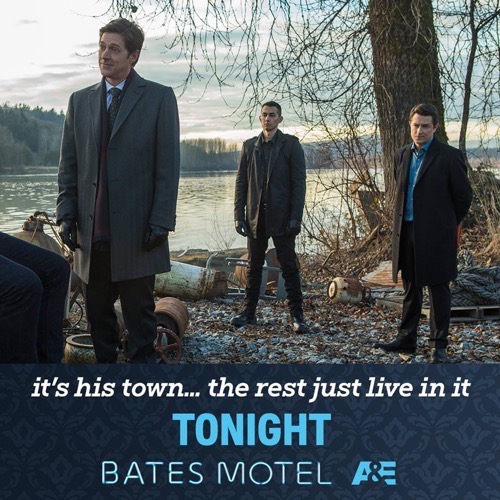 Bates Motel airs tonight on A&E with an all new April 27, season 3 episode 8 called “The Pit” and we have your weekly recap below. On tonight’s episode, Romero confronts Norma about new information that has recently come to light.

On the last episode, Norma [Vera Farmiga] had one big mess to take care of upon her arrival home; Norman [Freddie Highmore] agreed to get help; and Dylan [Max Thieriot] received shocking news about Emma’s [Olivia Cooke] health. Did you watch the last episode? Did you miss it, we’ve got a detailed recap right here for you.

On tonight’s episode as per the A&E synopsis, “Romero confronts Norma about new information that has recently come to light; at the same time, Emma makes a decision about her future with Norman, who is left reeling from a recent discovery; and Caleb and Dylan accept a job that comes with some risk.”

Tonight’s episode is going to be a great one and you’re not going to want to miss it. Bates Motel airs on A&E at 9:00 PM EST, while you wait for our recap hit the comments and let us know how excited you are about this new series.

Norma is just waking up, Dylan walks in and she tells him it was great that Alex was at the dinner the night before. Dylan tells her that he is going to the farm for a few days and when he gets back they need to talk about what they are going to do with Norman.

Norman is awake lying in bed, Norman comes into the room and asks him how he is doing. He says he is fine, then he gets up to go to the office, he wants to be with Emma since she won’t be around much longer. Norma hears a truck outside, she is wondering what the hell is going on when she sees construction equipment. Norma runs outside, she finds out that they have orders to dig a whole for a new pool. The construction tells her that if she has any questions, she should ask Bob Paris. Norman comes outside, he is upset, there was no money for down comforters but there is money for a pool. Norma tells Norman to just be happy he is getting a pool, he tells her to go inside and put some clothes on.

Romero arrives at a dealership, he is looking for an early 70’s Mercedes and the salesman actually has one of those. Romero tells the guy that the woman he sold it to, she wants it back.

Norma calls Bob, she wants to see designs for the pool.

Bob is down at the ship yard, they have James tied up and worrying about what they are going to do to him. Bob tells James that he is looking for a flash drive and wants to know if he knows anything about it. James tells Bob that Norma is his patient, Bob knows different that Norma spent the night. Bob tells him that he needs stuff on Norma, anything at all, James says that he won’t break patient/doctor confidentiality and he can go to hell. One of Bob’s men goes over to James and takes an electronic nail gun, shoots his foot.

Dylan is at the farm, Chick is getting him prepped for his drive. Caleb walks up and tells Dylan that he doesn’t want him to do it, he is delivering guns and what if he gets caught. Dylan tells Caleb that he is doing it, Caleb says fine, there is no way he is going without him. Dylan announces that they are both going, they have their rendez vous time.

At the motel, Norma places a call to James who just got thrown out of his car and tossed on his lawn. Norma leaves him a message, she wants to know what he said to Norman the day before because he is distant and strange since then.

Norma is outside, she finds out that the whole is 23 feet deep, too narrow for a pool. Romero drives up in Norma’s old car, she is thrilled that he brought it back. Romero finds that the whole is too deep and asks where the plans are, Norma says she doesn’t have them yet but the workers have assured her that it is a pool that they are digging. Norma is touched that Romero brought her car back, she kisses him on the cheek, when she goes to leave he has this look on his face, you just know he has feelings for her. Romero then goes to look at the hole.

Romero drops by to visit Bob, he tells him not to screw with Norma. Bob tells Romero that he has to tell him a few things that he found out recently, he should sit down. Bob says that he had a little session with her therapist, he did a little digging, she was screwing Romero’s deputy; she also told the therapist that Norma killed his father, she is using Romero. Bob says that he is protecting his town, he wants Romero on his team. Romero leaves as Bob tells him to think about it.

Dylan and Caleb make a stop, Dylan calls Emma to find out how she feels. Emma says she is ok, she is at the motel working for a couple of hours. Emma asks if Dylan will be home later, he says he will be gone for a few days to make money for the farm. Dylan wishes her well and tells her if she needs him for anything, he won’t be available.

Caleb is ready to go, he has a gun on him and hides it on the side of the truck.

Norman is outside, he calls the hole for the pool a pit. Norman asks Emma to go to a movie, she tells him that they need to talk. She then tells him that she was there the night he blacked out and he is always somewhere but not with her. Emma basically breaks up with Norman who is visibly upset and runs into the house. In the house, Norman sits on the rocker, the dog comes up to him and he tells him that the world is really a screwed up place.

Romero is back at the motel, Norma answers the door and tells him that she is heating up some leftovers, she invites him in. Norma joins Norma on the couch and asks her if she remembers the first time he met her. He then tells her that he doesn’t want to go inside the house, he just wants the truth, he asks her how did her husband die. Norma says that he died in the garage when a heavy shelf fell on him. Romero says it’s the last chance, she says it is the truth. Romero says goodbye and walks away. Norma calls out for him, but he doesn’t turn around.

Inside the house, Norma is sitting on her bed, Norman walks in and tells her not to turn the light on. He asks her if she is afraid of him, he says the thing James said, he can’t get out of his head because he thinks it is true. He says that James thinks he is attracted to his own mother. Norma tells her it is nonsense, he is just becoming sexually aware and it is just ridiculous. Norma says sex is confusing and Norman should just say this is stupid. Norma tells Norman that she never wants him to second guess anything, they start hugging and fall down, lying together on the bed. She tells him not to let anyone get in the middle of them, this is the only thing that is real, him and her.

Emma is at the farm, she has brought a basket with flowers in it and brownies, she writes a note. Gunnar is there, he tells her he was meaning to call her and she says her health hasn’t been good and the last thing on her mind is something romantic.

Caleb and Dylan arrive at their destination, nobody is there, Dylan asks if he has done this before, Caleb says some. Dylan then asks why Caleb has a warrant, he explains it was on a run, the driver got beat up really bad. All of a sudden, a phone in a phone booth nearby rings. Caleb goes to answer it and nobody is there, he soon realizes that there is a cell phone taped to the wall, he answers it. Caleb gets instructions to drive a bit to meet up with someone, he tells Dylan they can turn back, but he refuses and says he wants the money. Caleb and Dylan arrive at this barn, a few guys come out with flashlights and guns. The one guy is pissed that it is them delivering and they were not told about the change in plans that Chick would not be there, they search Caleb and Dylan, find a gun on Caleb and take it. They guy then tells the two to face the truck and get down on their knees. Caleb tells them it is all good, they have no issues, they are delivering and leaving. The guy says they are not paying up, they are to kill them. The guy puts a gun to Dylan’s head and tells him he is going to be the message to take back, Caleb reaches into the side of the truck, gets his gun and shoots the guy before he has a chance to shoot Dylan in the head. Dylan and Caleb scramble to get out of the place alive.

Romer is in his car, he has the flash drive – he calls the District Attorney.

James is packing his things to leave when Norma drives up – he tells her that he got the shit kicked out of him from some guys who wanted information about her. He says he is leaving the town and she should do the same and he never, ever wants her to contact him again.

Norma runs home, she finds Norman in the basement. She tells him that the nights she ran away, she ended up at James house, she told him things, like how his father died – that he killed his father. Norma says that James told this bad man, the man who wants to do things to them. Norman is upset, he screams at her and asks her how she could do it. She yells back at him and tells him that he has no idea how hard it is to be his mother with his blackouts. Norma then apologizes and tells him to lay low, she is going to fix this. Norman is upset, Norma is gone but he sees his mother in front of him wearing a provocative dress, she makes a pass at him. All of a sudden, Norman’s dog starts to take off from the house running and Norman tries t run after him, he can’t catch up.

Norman is walking, he sees a car stopped. A girl is standing there looking at flashing lights on the bridge, she turns around and calls out to Norman. It is Bradley.