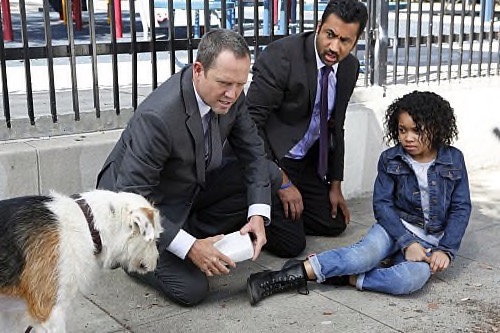 Tonight on CBS Battle Creek airs with an all new Sunday March 15, season 1 episode 3 called, “Man’s Best Friend,” and we have your weekly recap below. On tonight’s episode, Cookie the police dog sniffs out a stash of heroin in a little girl’s backpack, leading Russ [Dean Winters] and Milt [Josh Duhamel] to search for evidence to back their competing theories as to where the drugs came from and why she had them. Elsewhere, Jacocks does some digging into the reason Milt has been sent to Battle Creek while she’s in Detroit for a training seminar.

On the last episode, Milt and Russ went undercover as distillers to solve the murder of a victim drowned in maple syrup; at the same time, Font waged his own personal war against his medical-marijuana provider. Did you watch the last episode? If you missed it, we have a full and detailed recap for you right here.

On tonight’s episode as per the CBS synopsis, “when BCPD’s police dog, Cookie, sniffs out a stash of heroin in a young girl’s backpack, Russ and Milt have competing theories as to where it came from and why she had it. Also, Jacocks travels to Detroit for a training seminar, with the ulterior motive of finding out why Milt was sent to Battle Creek.”

When the guys scheduled a routine visit to one of the local middle schools, they were in for quite a surprise when their drug sniffing dog, brought along mainly for show, managed to detect a sizable package of heroin in a young girl’s bag. So on tonight’s all new episode of “Battle Creek”, the detectives have to figure out where this kid found a kilo of drugs. Because what really matters here is that the girl in question is refusing to talk!

Meaning she’s probably protecting someone or at the very most herself!

Naturally, Russ suspected the parents and the girl’s mother was more than just a tad defensive when she later spoke to the detectives. Apparently, she had went on to hire an attorney and then she threatened the police with a lawsuit for planting the drugs on her daughter in order to cover up their dog’s vicious attack. So the only way to get around the mother was to use Social Services as a decoy in getting into the house.

However, the social worker found nothing to be worried about. In fact the kid in question appeared to be thriving with her parents. She had awards pinned up everywhere and there were obvious signs of love.

So the only red flag was a picture of the uncle. The uncle that just so happened to be a cop Milt recognized and thus would have access to drugs he might have stolen from a drug bust. Hence the guys then had to speak with Uncle Joey.

Although the interrogation into the uncle was kind of personal for Russ. For, you see, Joey Ferraro recently had a barbeque where he invited everyone on the force and guess who was the sole man left off the invitation list? So the actual interrogation was less about his niece than it was about why Russ wasn’t invited to this shindig.

Joey, though, was cleared. He was one of the good guys on the force so deep down no one really suspected him. Russ merely wanted toy with him for a bit. Meanwhile, Milt was working on that theory that did pan out.

He suspected a cartel operating in the neighborhood might have ditched the drugs during a bust. But knowing these guys, they would have gone back for it eventually and if they find out Katori had moved it then she could be in great danger. So Milt convinced the girl’s parents to cooperate seeing as it was in her best interest. And they would have but their daughter on the hand remained stubborn.

She kept telling the police she can’t and then when her parents pushed her she then said she won’t tell them anything.

So, in order to protect Katori, the detectives had to bring down a drug dealer without her help. And while that led to several arrests and even a victory for the police – the drugs they later tested didn’t quite match the drugs Katori had on her. Meaning they were still looking for this person Katori wanted to protect.

And the only way they could get it through to the girl that she was involved in something she’s not prepared to deal with was to arrest her.

Yet, even in a juvenile detention center, Katori refused to reveal who she got the drugs from. So Holly conducted her own investigation. Into the evidence locker that is and what she found is that someone had switched out a bag of heroin with baking soda.

Seeing as Uncle Joey was the only one to have access to an evidence locker, it was a clear case of him being all too willing to let his niece take the rap for what he did. So they had to trap him in order to get justice.

They bugged his car and recorded his conversation with his niece. And apparently the little girl had found the drugs at her uncle’s and was planning on getting rid of it before she was caught by the dog. So it seems he wasn’t going to use her as a pusher or a mule. But he wasn’t going to help her, either.

And as for the mystery surrounding Milt, Russ and Erin each looked into it and they found out that more than one superior in the FBI tried to have him transferred out. So what could he have done to make everyone turn against him?