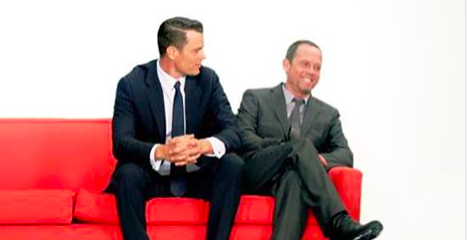 Tonight on CBS Battle Creek airs with an all new Sunday March 8, season 1 episode 2 called, “Syruptitous,” and we have your weekly recap below! On tonight’s episode, Milt [Josh Duhamel] and Russ [Dean Winters] go undercover as distillers to solve the murder of a victim drowned in maple syrup; at the same time.

On the last episode, the jaded Det. Russ Agnew reluctantly partnered with charming FBI agent Milt Chamberlain to solve a drug-related double homicide in the premiere of this drama, which followed their rocky relationship as they employ very different tactics when solving crimes in the down-and-out-streets of Battle Creek, Mich. Did you watch the last episode? If you missed it, we have a full and detailed recap right here for you.

On tonight’s episode as per the CBS synopsis, “special Agent Milt Chamberlain and Det. Russ Agnew go undercover as distillers to infiltrate the world of Battle Creek’s maple syrup cartels when a murder victim is found to have drowned in the gooey breakfast condiment. Meanwhile, Det. Font White goes to war with his medical marijuana dealer.”

A new body was found not that far from the road and the Commander had asked Rus to hurry to the scene with Milt before the heavy downpour they were having ended up destroying the evidence. Yet, Rus being his typically stubborn self, didn’t want to take Milt with him. So he tried to get around him and all that resulted in Milt having to track him to the scene like a bloodhound.

And for what? Together, the two men were able to label their crime scene as a murder case. Meaning they actually work well side by side and generally Rus is not really known as doing that with anyone else. Something he eventually realized on his own.

Later, after they had identified the body, Rus was tasked with breaking the news to the widow. And thankfully he has passed on that particular job to Milt. Milt, you see, is more a people’s person. So Rus knew bringing him along, this time by choice rather than an order, was going to help towards their investigation. And, up to a point, he was right.

Milt did know how to get people talking. Maybe it was the dipples but soon both the widow and her father started telling the good detectives about the Maple Cartel. Apparently, that is not a joke and there is such a thing.

The Maple Cartel controls all maple products that move in and out of the mid-west. And though the widow’s testimony and later even Eddie’s business partner’s testimony would have normally have been enough to convince any sane judge to sign off on a warrant – the judge they approached demanded more evidence before he signed anything. So, unable to use Milt’s dipples ,Rus tried to get the evidence by going it alone again. Yet, like last time, that didn’t work out and he was amlost mauled by watch dogs.

Hence, he asked his boss to conduct an official sting.

He and Milt were going to be impersonating Maple suppliers from Vermont and once that was established they were going to start moving in on this Julio McFarlen’s maple territory. It seems it was their hope that if they make a big enough fuss – Julio will soon want to confront them. However this whole thing was because of maple syrup. So no one was actually expecting a man with a gun to come around.

Luckily, the shooter only wanted to target the barrels of maple syrup but thanks to the “shooting” – the detectives did get their judge to sign that warrant. Though it would have been helpful if the judge hadn’t then turn around and warned Julio about it.

Because, rather than waiting for the cops to come to him, Julio decided to be the one to approach. And he did so in order to get his fall guy to confess to the shooting. Apparently his employee acted on his own and McFarlen claims to be deeply disappointed in him.

Literally everyone saw through the confession for what it really was and, sadly, only Rus wanted to do something about it.

He followed the employee and was honestly doing his best to convince the other man to tell the truth about his boss when it all blew back on him. McFarlen must have found what happened and after he made a few calls – Rus found himself suspended. So even though he would go on to find evidence of who their killer is – he couldn’t do anything about it until he turned to Milt for help.

And Milt in turn hired Rus on as a consultant. It seems he could do that as a federal agent so he did it in order to finally win over Rus’s trust. Yet, neither would surprisingly go on to make an arrest.

You see the killer was revealed to be the victim’s father-in-law. Eddie, while noble in standing up to the Maple Cartel, often beat his wife the second he got home and seeing as she was never going to leave him – her father took the necessary measures in getting rid of him. But after the father-in-law confessed, so did the daughter.

So it was up to the guys’ boss to then make a unilateral decision to clear up the case of two confessions. And in the end, she chose not to press charges against either of them. She thought they needed a break for once and that was something Milt didn’t know how to comprehend at first but ultimately got around into accepting!

But in spite of his personal concessions and even later helping Fontanelle work out a deal with his medical marijuana supplier – when a new case cropped up – Rus still tried to leave Milt behind at the office.