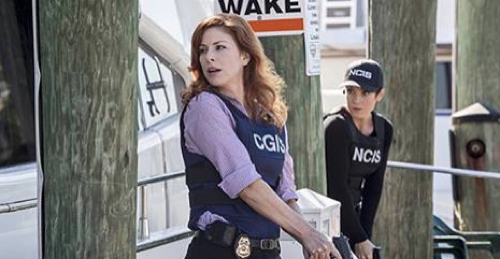 Tonight on CBS NCIS: New Orleans continues with an all new Tuesday January 13, season 1 episode 12 called, “The Abyss” and we have your weekly recap below. On tonight’s episode, the NCIS team partner with the Coast Guard Investigative Service to probe a double homicide aboard a research boat, when an Admiral’s daughter becomes the prime suspect in the case. Meanwhile, Lasalle [Lucas Black] tracks down his estranged brother.

On the last episode, the NCIS team investigated a deadly explosion at the Navy-Marine Corps Relief Gala event they were attending, and discovered that Pride was the intended target of the bomb. Did you watch the last episode? If you missed it, we have a full and detailed recap right here for you.

On tonight’s episode as per the CBS synopsis, “when a Navy Admiral’s daughter is the prime suspect in a double murder case aboard a research boat, the NCIS team partners with the Coast Guard Investigative Service (CGIS)to work the case. Meanwhile, Lasalle tracks down his estranged brother.”

Anna Huntley, the daughter of Navy Admiral Adam Huntley, has gone missing on tonight’s episode of “NCIS: New Orleans”. And, honestly, there are not a lot options or avenues for that matter that can lead the team into discovering where she is.

You see Anna was on a research boat in middle of the ocean when she disappeared and the few witnesses that might have known what happened to her were also found murdered on that very same boat. So what happened to Anna? Was she kidnapped, did she fall overboard, or worse was she in on it with the killers?

So many questions and there’s not a lot of time to find the answers. If Anna did go overboard then at best she has hours left!

And it’s because of that, that worry, the CGIS team (Coast Guard Investigative Service) have called in asking for a joint task force with the NCIS. Thankfully, Pride has no problem with lending a hand to not only an old friend but also helping in the search for an Admiral’s daughter.

Everyone wants to find Anna before it’s too late. Though not everyone trusts she’ll be just a victim in all of this. For one, the boat she and her friends were using was ransacked. If this was a mere kidnapping then why would someone take the time to kill and ransack the boat?

Thus, they looked into who would try to profit from stealing from a boat and in the process they found Clive. Clive it seems loves to play pirate and terrorize the high seas but he swears he didn’t kill anyone. He said the two people were already dead when he got there.

And although they’re naturally suspicious of Clive’s, a video soon emerged supporting it. Apparently there’s footage of Anna pointing a gun and this could mean she killed her friends and research partners.

Yet no one knew why she would do this. They tried looking to a love triangle and that hadn’t panned out. The only thing that seemed odd is that up to a few weeks ago – Anna was in debt until she suddenly started paying everyone off.

No one knows where she got her money and somehow stealing from two other Grad students didn’t seem to make any sense.

Treasure hunting on the other does pan out because CGIS Agent Borin and Pride found several coins not far from where the “research” boat was found. Those coins turned out to be minted pesos from the 18th century. And they were a lot of money today.

A single mother with student loans will probably do anything for that kind of money and it looking like Anna was even prepared to kill for it. The admiral had later received a text message from his daughter and in the message she told him not let her son growing up hating her.

Meanwhile, as all of this was going on, LaSalle has been dealing with his sick brother. The brother is mentally ill yet he refuses to stick to his medication or even get help. So it’s been not but a constant battle trying to get his brother some help. And that was only after he eventually found him after he started his search months ago.

The brother now claims he has people looking for him and seeing as LaSalle has no way of proving if that was all in his brother’s head – he decided to let his brother leave hospital care. At least for the meantime while he tries to figure out how to get his brother some help.

As for the case, someone has been selling the pesos online and once the team tracked that person down – they realized it wasn’t Anna that had been making a profit. It was actually her teacher.

It seems the teacher wanted some money so she convinced some of her grad students to do the dirty work for her and when they no longer wanted to participate – she killed all of them including Anna. Unlike her friends, Anna’s body was thrown overboard to elude suspicion on the teacher.

The sad truth is Anna had dove in front of one of her friends to try and save her yet the both of them were killed anyways. And it was the teacher that had written the infamous text. But after she was caught, she finally decided to give Anna’s family some peace of mind by telling them were she had dropped off Anna’s body.

So the admiral and his grandson now know what happened to Anna!