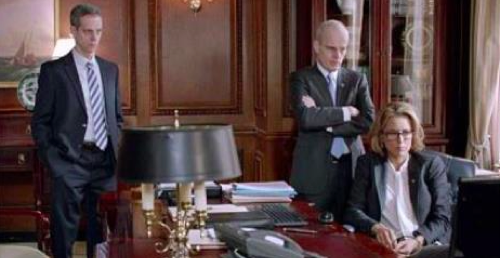 Tonight on CBS Madam Secretary airs with an all new Sunday March 1, season 1 episode 14 called, “The Whisper of the Ax” and we have your weekly recap below. On tonight’s episode, a special consultant is hired by Elizabeth [Tea Leoni] after she is humiliated at a public budget hearing

On the last episode, Henry’s father arrived for a visit; at the same time, Elizabeth pushed to prosecute a Bahraini diplomat after he was caught holding a maid hostage in his home. Did you watch the last episode? If you missed it, we have a full and detailed recap right here for you.

On tonight’s episode as per the CBS synopsis, “a special consultant is hired by Elizabeth after she is humiliated at a public budget hearing due to the fact that her staff failed to find the corruption that exists in her microloan program; at the same time, the investigation into Marsh’s death continues.”

Tonight’s episode of Madam Secretary kicks off with Elizabeth meeting with her team – they are bickering over her policy on small business loans. Jay argues that she needs to cut the program or else her entire budget will be shot down. Daisy argues that Elizabeth’s small business loans have created thousands of success stories – she thinks that Elizabeth should bring one of the woman who succeeded with the loan to the budget meeting. Jay argues but Elizabeth tells him he needs to “get on board” and they are flying the woman in to be her guest at the meeting.

Elizabeth heads home for dinner with her family. Her daughter Quincy says that she can’t concentrate on table talk because she has some serious studying to do for an exam. The younger kids head upstairs to work on their homework and talk turns to Elizabeth’s meeting before congress. Her oldest daughter rants that it is absurd to cut the micro-loans from the budget. Elizabeth reassures her that she is going to fight Congress. Elizabeth and Henry begin harping on their daughter about going back to college and getting an education. Henry reassures Elizabeth that he will talk to Stevie in a few days and get her back in to college.

It’s time for the Congressional Budget Meeting, Burke demands to know why Elizabeth has made the micro-loans a priority and raised the budget 30%. Elizabeth explains that the loans’ success rate is over 96%. Elizabeth tries to introduce her guest, the woman she brought it to testify about the micro-loans but Burke dismisses her and says that they don’t need to speak to her. Burke shares photos of Miles Pendergraff partying the night away at a casino with two naked women – Miles is supposed to be regulating the micro loan program. Burke reveals that he has been setting up dozens of fake loans and embezzling the money to support his gambling and partying. He demands to know why Elizabeth would support that.

Later that night Elizabeth heads home and rants to Henry about Miles and the embezzlement. He tells Liz to get some sleep and reassures her that she can figure out what to do in the morning – she turns on the TV and there is a news anchor ranting about Elizabeth’s “dirty team.” The next morning Elizabeth goes to work and meets with her team to discuss the micro loan program. Jay rants that Elizabeth needs to drop the micro loan program before she loses her office. Elizabeth shouts that she gets this is a disaster and demands to know why her “entire staff let her hang herself in front of a nationally televised Congressional meeting.” She announces she is bringing in a professional to consult with them and storms out of the office.

Meanwhile, Henry heads out to lunch with their daughter Stevie. She informs him that going back to college is not an option. Henry snaps at her that she “needs to find what she is in to and figure out what matters to her.” Stevie says that she cares about micro-loans and she wants to help out at her mom’s office. Her Dad thinks that she is just “joining the cause” because it is embroiled in controversy right now.

Elizabeth meets with Russell and they are briefed on Samila, they have located her and they think that they can bring her in – but it will be dangerous because she is in Turkey. Russell says to go ahead with the extraction if it means that they can figure out who killed the Secretary of State.

Michael arrives at Liz’s office with his dog Gordon and storms through – Blake follows him and rambles that this is “not a dog-friendly office.” Blake is puzzled, Jay and Nadine explain to Blake that Mike is a consultant and they call him the “Hatchet Man,” he fills vacant Cabinet seats and consults with politicians on who they should fire from their office. Meanwhile inside Elizabeth’s office, Mike is ranting to her about the scandal, he tells her to “dump her team and start cutting them loose today.” He warns her that “this is Washington,” and she needs to “kill or be killed.” Elizabeth says that she is interested in firing anyone right now – she needs his help taking down Burke. Elizabeth’s team all heads out to dinner together and they are sweating in their boots, they bicker over which one of them Elizabeth will fire first. While they are at the restaurant someone sends them a tray of shots – it’s Burke’s assistant Kyle Finney, he is the one that exposed Miles’s embezzlement.

Stevie arrives at Micro-Loans United’s office – she arrives at the office and finds a man arguing with a woman on the phone, she is speaking French and he has no idea what she is saying. Stevie says she came to volunteer and she knows French, he has her take the call for him. Once Stevie finishes – he tells her to pick a desk, his staff all quit because they heard that the program was being shut down. Elizabeth calls her staff in to her office and tells them that as of right now they are “all on notice,” and she expects nothing but the best from them from here on out.

Madam Secretary calls Jay in to her office and shuts the door, everyone waits and watches for him to come out. When he does – security guards are waiting for him, they strip him of his badges and ID’s and escort him out of the building – he appears to have been fired. Afterwards Madam Secretary calls Burke’s assistant Kyle Finney in to her office. She congratulates him on exposing Miles and putting the red flag on the micro-loan program and says that she wants to offer him a job.

Jackson meets with Elizabeth and brings her video footage that was taken in Turkey of their men trying to bring in Samila. They approached her in a crowded street and when they tried to bring her in a sniper shot and killed her and a shoot-out ensued. Jackson is furious that the operation was compromised – he turns to Elizabeth and demands to know who she told about the operation because they were jumped and there was an obvious leak in their office.

Elizabeth meets with Isabelle and accuses her of leaking the information about their extraction of Simala, Isabelle claims that she had nothing to do with it. While they are discussing it, two black SUV’s pull up to her house with their lights flashing. Isabelle tells Elizabeth that she doesn’t blame her for what she is doing. The FBI searches Isabelle’s house from top to bottom, and they give her a lie detector test.

At the micro-loan office Stevie discusses her internship with the man in charge, he gives her paper work for her college guidance department. Stevie explains that she isn’t in college and is shocked when he informs her that she can’t work at the office for free if it isn’t in conjunction with a college course because the government would “consider that slavery.”

Kyle Finney runs in to Jay at the bar – he is wasted and ranting about Elizabeth firing him. Kyle reveals that Elizabeth offered him Jay’s old job and he turned it down. Kyle offers to get Jay a job working for Burke.

It’s time for another Congressional meeting, Elizabeth brings along her guest Ms. Twaing – they flew her in from Vietnam. She finally gets her chance to speak and Twaing tells Congress the story of how she got a $200 micro loan and it turned around their entire village – they were able to grown their own food and build a school that teaches their children how to speak English. Elizabeth announces to Congress that she is not cutting the micro loans and she plans to fight for them.

Elizabeth meets with Jackson and tells him that Isabelle passed the polygraph and they found a very sophisticated bug in her house. So, she isn’t a mole – someone was spying on her and got the information on the Samila extraction. Jackson doesn’t want to hear it – he says that Isabelle is in the CIA and she was trained to beat polygraph tests and could have planted the bug on herself. Elizabeth pleads with Jackson to go to the president – she thinks it is time they bring him in and fill him in on what is going on.

Elizabeth meets with her team and brings Jay is – she reveals to them that they fake fired him and created a rouse so that they could sit down Kyle Finney and get information from him. They aren’t thrilled to hear that Mike isn’t leaving yet – Elizabeth has decided to keep him around.

Elizabeth heads home to relax with Henry and Stevie arrives – she reveals to her parents that she needs to borrow $20,000 because she is applying to Georgetown University. She explains that she can only work at the Micro-Loans office if she is a college student. Elizabeth and Henry tell her to “go ahead and apply” and agree to give her the money. Stevie heads upstairs, and before she goes she reminds her parents that she is “doing it for herself not them.” As soon as she is out of sight Henry and Elizabeth begin celebrating.

Elizabeth receives a late night text from Russell, he tells her to “come in” beause he was is meeting with Potus. They fill him in on the mole in the office and extracting Samila, Potus is not happy that they waited so long to tell them, but he admits that he has always thought the Dubai accident was suspicious and he had two undercover agents working on it – George Peters is dead now. Elizabeth realizes that the mole really was Juliet and they rush to her house, but the closets have been cleared out and she has skipped town. Elizabeth finds a note on the counter from Isabelle, addressed to her.