Bella Hadid and The Weeknd Split: No Longer Dating – Break-Up Due to Busy Schedules? 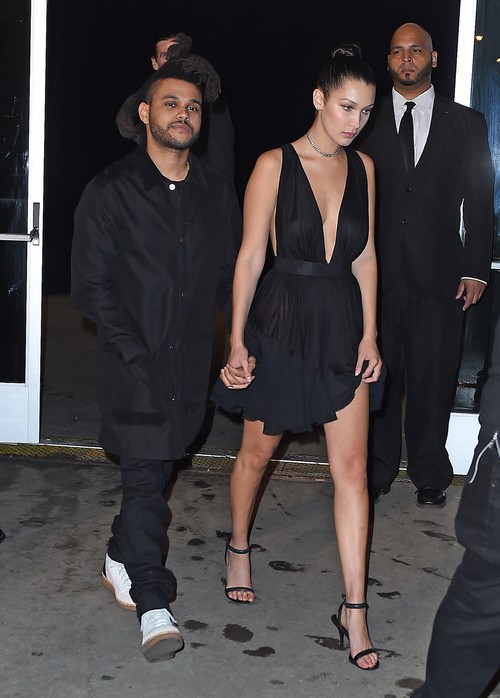 Bella Hadid and The Weeknd are no longer dating exclusively and in fact appear to have split – citing hectic schedules the former couple have opted to get way more casual with their relationship. An E! Online report claims The Weeknd, whose real name is Abel Tesfaye, was caught flirting pretty hard with some groupies after a recent concert in Miami, Florida.

Bella Hadid wasn’t at the show, which sparked claims that the Canadian singer was stepping out on Bella.

It turns out that The Weeknd wasn’t stepping out on Hadid as suspected since E! News has two sources confirming that the couple have cooled off their once-sizzling romance. “Bella and The Weeknd have taken a break,” one of the sources told E! News. “Their schedules got very busy and it really cut into there relationship. They are still in each other’s lives though, just not in the same exclusive capacity.”

Bella Hadid and The Weeknd did not spend Christmas together. Instead, Bella spent the holidays with her mother, Yolanda Foster and siblings Gigi Hadid and Anwar Hadid. Yolanda, Bella and Anwar posted pictures all over Instagram showing off their family vacation in Aspen together.

The Weeknd documented a recent strip club visit by posting photos to Instagram. Then the singer went on to spend Christmas Eve dropping two new singles. The first is a collaboration with Future called Low Life and the second is a remix of Jeremih’s hit Pass Dat.

Tesfaye announced on Instagram on Saturday, December 26 that he was headed back to Miami for another show. That’s the same place the singer was caught flirting with a group of women just before Christmas. It seems that Hadid isn’t on his mind at all and maybe busy schedules really are to blame for the split.

No matter what the reason for the very recent break up, Bella and Abel Tesfaye don’t seem too heartbroken about their split. According To E! News’ source, The Weeknd and Hadid are still hooking up, they just aren’t stopping each other from seeing other people anymore.

Usually when a relationship goes from serious to seeing other people, it means the end of the road. We’re guessing it won’t be long before Bella Hadid has another guy on her arm.