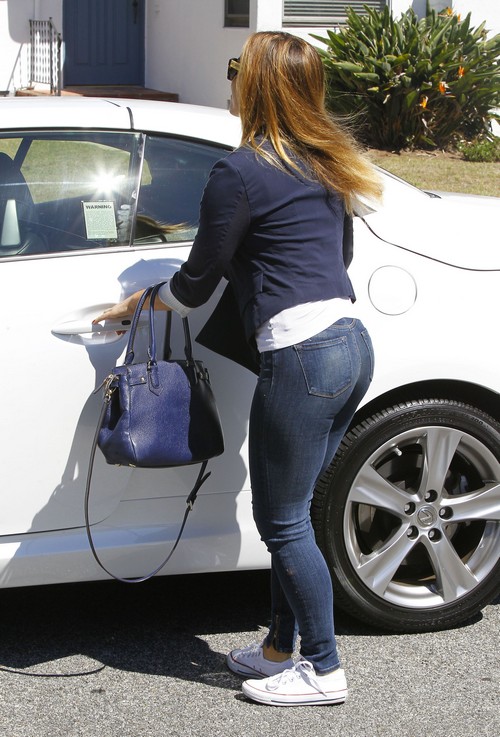 The evidence is piling up against Ben Affleck, and if you have been following his divorce in the news then you know it is pretty obvious he cheated on his wife Jennifer Garner with their babysitter Christine Ouzounian – and now he is allegedly paying her to keep quiet! Ben Affleck’s rep vehemently denies the cheating scandal, however photos have emerged of Christine and Ben chatting outside of his LA bachelor pad, and of Christine partying on a private jet with Ben and his pal Tom Brady en route to Las Vegas. At this point, you would have to be a fool to believe that Ben and Christine didn’t have an affair.

Christine Ouzounian is set to receive a huge payday, regardless of what happens. Right now Ben Affleck is allegedly paying for all of her living expenses – Christine just bought herself a $50,000 car and is paying $10,000 a month in rent to hide out in a Los Angeles residence and keep quiet according to In Touch. A source dished to In Touch Magazine, “Ben paid for it all. He also gave her enough to cover her bills and expenses, plus spending money for at least three months. She bought a brand new Lexus convertible with the money that he gave her. Christine can’t afford a $50,000 car and a home that rents for $10,000 a month – she was making a nanny’s salary. You do the math.”

Ben Affleck is stuck between a rock and a hard place though, if he doesn’t keep paying off his mistress, then Christine Ouzounian is prepared to file a lawsuit against her employers for wrongful termination and sexual harassment, among other things. And, she could make thousands off from tell-all interviews to the press, and possibly even a book deal. One way or another Christine is getting paid, at least if Ben is the one paying her he can control how the story is spun, or in this case not spun to the press.

Do you think that Christine Ouzounian is a greedy gold-digger, or is she just making the best out of a messed up situation? How long will Ben Affleck continue to pay her to be quiet? Let us know what you think in the comments below!

Update: TMZ reports that sources close to the situation admit that although Ben had “some sort of friendship” with Christine he is currently not in contact with her nor is he “funding the new, lavish lifestyle of his former nanny.”  Well the truth is out there readers – and obviously we won’t be getting it from Ben or his sources and media team since we’ve seen the photos and there appears to be more to this story than Ben and his team are admitting.