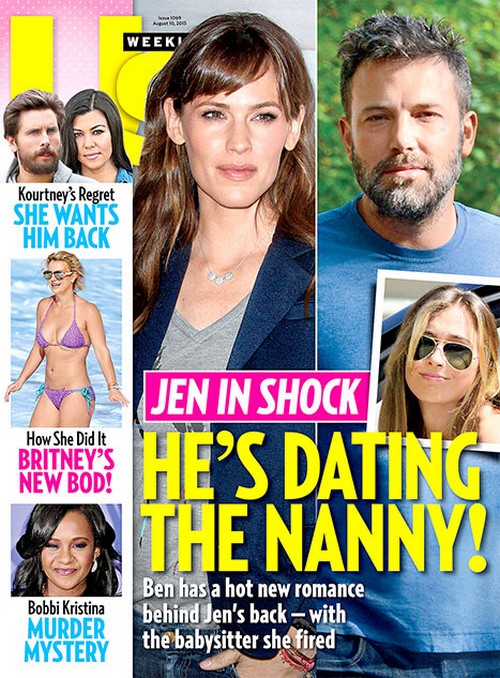 Ben Affleck and Jennifer Garner announced their divorce less than a month ago, but Ben has already moved on – and is dating their nanny, Christine Ouzounian! This week’s cover of US Weekly Magazine drops the bombshell, the headline reads: “Jen In Shock – He’s Dating The Nanny! Ben Has A Hot New Romance With The Nanny That She Fired.” The nanny in question is 28 year old Californian Christine Ouzounian.

Jennifer Garner hired Christine through a high-end nanny service in Los Angeles, however while she was caring for Samuel, Seraphina, and Violet – Garner realized that Christine and Ben were getting a little too close for her liking, when she suspected something was going on between her husband and the nanny she promptly fired Christine. According to US Weekly’s inside sources – Ben continued cheating with Christine even after she was no longer on his family’s payroll.

A pal of Christine’s dished to US Weekly, “They would hang out without the kids and they were very flirty. She says that Ben really, really likes her and this is true love.” Christine can’t be too far off base, their relationship is clearly not one-sided, because after Ouzounian was fired by Jennifer, Ben began inviting her over to hang out at his bachelor pad. According to US Weekly, Christine was spotted leaving Ben’s Los Angeles rental property on July 17, and Affleck has been reportedly in constant contact with the former babysitter – emailing her and texting her every day.

It’s not exactly new news that Ben Affleck cheated on Jennifer Garner, the couple was plagued with cheating scandals throughout the length of their 10 year marriage. But, it is foul that of all the women he could cheat with – he chose his three kids’ nanny and did it right under Jennifer Garner’s nose! Do you believe that Ben Affleck would cheat with their nanny? Will he actually wind up going public with Christine Ouzounian and dating her after the divorce is official? Let us know what you think in the comments below!

Ben Affleck’s former nanny and rumored girlfriend Christine Ouzounian heads to the Bel-Air Hotel in Bel-Air, California on July 29, 2015. US Weekly has reported that less than a month after splitting from wife Jennifer Garner, Ben Affleck has moved on with their former nanny. Christine was picked up from her home and had her driver take her to the back entrance to the hotel.

less than a month after splitting from wife Jennifer Garner, Ben Affleck has moved on with their former nanny, Christine Ouzounian