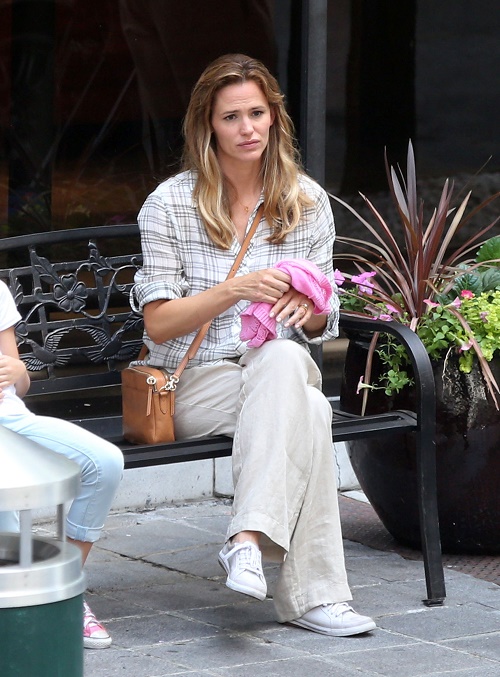 Does Jennifer Garner already have a boyfriend? Jennifer Garner and Ben Affleck just announced their divorce, but don’t worry about Jen – she’s going to be just fine. When news broke of the divorce, everyone seemed to rally behind Jennifer Garner. She was about to be a divorced mother of three and had weathered a decade of her husband’s boozing, gambling, and cheating. No one would have blamed her if she wanted to rest in bed for a month and eat ice cream and watch sappy movies. But Jennifer Garner is already on the rebound and reportedly has a new boyfriend!

Jennifer Garner has been working on a new movie titled Miracles From Heaven to keep herself busy during her messy divorce and expected custody battle over her three kids. But Jen found a shoulder to cry on while on set – her handsome costar Martin Henderson. According to a new report in this week’s edition of Star Magazine, the chemistry between Jen and Martin is undeniable, and they have been inseparable over the course of the last few weeks.

An inside source dished to Star Magazine, “Jen and Martin met in Georgia on the set of their new film and quickly bonded. He is always checking up on her and making sure she is happy.” Jen has reportedly been emailing all of her girlfriends and telling them how “amazing” Martin is. Although she is hesitant to jump head first into a new relationship, especially since she is still technically married, there is definitely something there between her and Martin!

Jennifer Garner could definitely use a rebound, or two, to give her a little pick me up after her and Ben’s breakup. No one can fault her for that, and Martin Henderson is easy on the eyes! But, she might want to hold off on anything serious until after she is done divorcing Ben and has settled their custody agreement over the kids. DO you think that Jen and Martin Henderson will make a cute couple? Is she moving on way too soon after her breakup from Ben Affleck? Let us know what you think in the comments below!