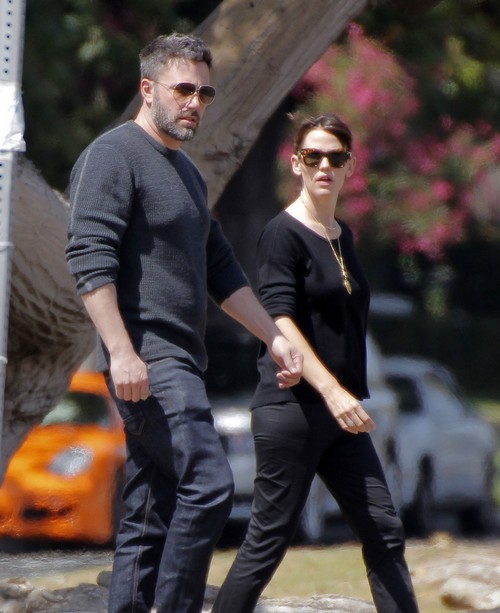 They say a picture is worth a thousand words and apparently Ben Affleck and Jennifer Garner
would like everyone to believe that. Ben Affleck and Jennifer Garner recently stepped out together for a nice family stroll on Thursday, May 28, in an obvious attempt to use the paparazzi to rectify the divorce rumors, but we’re not sure that they accomplished what they were hoping for. In fact, we think they did quite the opposite.

In the photos, Ben Affleck and his wife Jennifer Garner can be seen taking a nice family stroll with their two daughters Violet, age 9, and Seraphina, age 6. Ben was carrying Seraphina on his shoulders and Violet walked hand in hand with her mother, Jennifer, as the family unit went to Menchie’s for some frozen yogurt in Santa Monica, California.

This is the first time in a long time that Ben and Jennifer have been spotted out in public, and we are sure that this very public outing was their poor attempt at making everyone believe that their marriage was not on the rocks. The only problem, is that Ben and Jennifer look miserable in these photos, and a source tells People that “Jen and Ben were focused on each kid.” They do not look like a happy family, so for those reasons, these photos do not rectify in anything in our minds.

Rumors have been flying recently regarding Jen and Ben’s marriage and all signs point to divorce. Radar recently said that Ben did not spend Mother’s Day with Jennifer. They wrote , “According to an insider, Affleck, 42, opted to spend the holiday with his brother, Casey and his own mom. Meanwhile, Garner’s mother and father flew to L.A. from West Virginia to spend the day with her and her kids.” Radar also recently reported that Ben Affleck will be filing for divorce before his tenth wedding anniversary, which is June 29. That means we will only have to wait one more month to find out if this is true.

What do you think of these photos? Do Ben Affleck and Jennifer Garner look like a happy family, or is their marriage doomed? Let us know in the comments below.

Ben Affleck and Jennifer Garner take their daughters Violet and Seraphina out for ice cream in Santa Monica, California on May 28, 2015. It is being reported that the couple has secretly separated and is heading for a divorce by FameFlynet