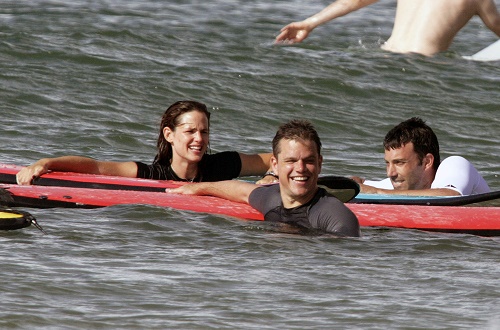 Could a bromance between Ben Affleck and Matt Damon be the reason for Affleck’s divorce from Jennifer Garner? According to Radar Online, Ben Affleck has been spending a lot of time with his buddy Matt Damon in order to help him cope with the divorce, but apparently, Jennifer Garner was always jealous of Matt Damon.

An inside source tells Radar that Matt Damon “has been helping [Ben Affleck] through this trying time. They’ve all been bust buds since their collaboration on Good Will Hunting and Ben and Matt have been dedicated to Patrick since they ooh home their Oscars.” Patrick, being Patrick Whitesell, who is Ben Affleck’s agent.

But Ben Affleck and Matt Damon have always spent a lot of time together, and the source revealed that Jennifer Garner was tired of the hangout sessions that would always exclude Garner. The insider says, “She, [Jennifer Garner], felt left out and alone, so she started to control things. It got nasty. She started making thinly veiled threats to make Affleck look bad. She knew he was talking to his agent and Matt about their marriage, and she started to feel like she being ganged up on by the boys.”

It seems that Ben Affleck’s bromance with Matt Damon and his agent Patrick Whitesell eventually became too much for Jennifer Garner and it drove this Hollywood couple to divorce, which was announced on June 30.

If Jennifer Garner truly did feel like she was being ganged up on by Affleck, Damon, and Whitesell, it makes perfect sense for Garner to react in the way she did. At the same time, we are sure that Jennifer Garner spent more than enough time with her girl friends talking about her marriage with Ben Affleck.

With that much gossip surrounding this marriage, it was certainly bound to crack at some point. Do you think Jennifer Garner was just being overbearing, or should Ben Affleck have spent more time with his wife and less with Matt Damon? Let us know in the comments below.