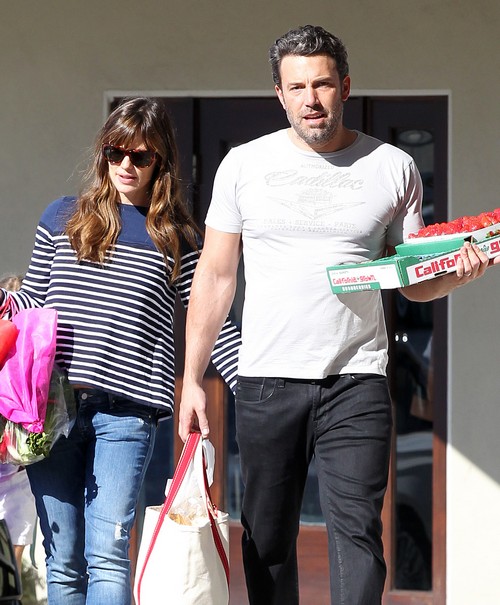 Jennifer Garner and Ben Affleck have tried their best to become the picturesque, happy-go-lucky couple that they pretend to be, but alas, it’s not working. Thanks to the media and today’s 24/7 coverage of celebrities and their private lives, we know that Ben Affleck has a gambling addiction, we know that he’s probably cheated on his wife in the past [and maybe even the present], that he’s had issues with partying, and that he’s basically not as invested in his family life as he’d like us all to believe. On the same wavelength, we’ve seen Jennifer Garner have to sacrifice her career for her family life, allowing Ben to go become an Oscar winner while she stays at home and plays the dutiful supportive wife. So is it any surprise that tabloids are now alleging that Ben Affleck and Jennifer Garner are headed towards a $150 million divorce?

This specific report comes from this week’s issue of The National Enquirer, which claims that Ben and Jennifer are living separate lives. The Enquirer’s source adds, “Jennifer is sick of Ben’s gambling, history of cheating, boozy past, and never-at-home work schedule.” So basically, what we said.

Again, not a huge shocker, is it? Jennifer Garner has managed to last in this marriage a hell of a lot longer than most women would, no matter what they were getting out of it. Jennifer may have a lot of industry cache being Ben Affleck’s wife, but what is she doing with it? She’s still in mediocre films, she’s not playing with the big guns, and she has to sit by and watch while her husband gets all buzz – both in front of the camera AND behind the camera! How is that fair?

She’s better off leaving him and capitalizing on that buzz to land a bunch of leading roles, and trust me, the public would love her for it. Right now, a lot of people are still buying into the whole perfect marriage facade that Ben and Jennifer have put out, but that would all come crashing down if Jennifer left Ben.