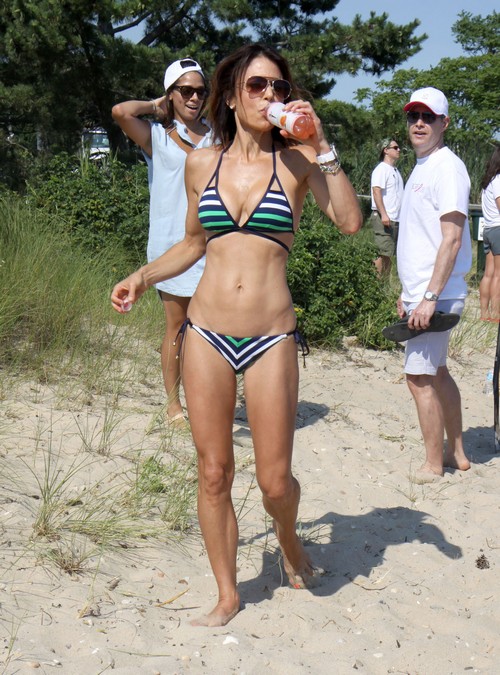 Bethenny Frankel is having some sort of relationship with somebody new and he – could be a she! – knows the way to the “Real Housewives of New York City” star’s heart is black licorice. She tweeted a photo of black licorice packaged up in pretty mason jars with the caption, “Someone special gave me assorted black licorice (my fave) in assorted mason jars. Keeper?”

Who is this mystery man – or woman – in Bethenny’s life? Could it be Eric Stonestreet of “Modern Family” fame? On a recent “Watch What Happens Live” visit she joked that she and Eric were dating and that he just happened to be waiting back at her apartment for her. “He’s a great actor. We’re sleeping together tonight,” she quipped.

Was it really a joke? Is she secretly dating Eric Stonestreet? Are they are couple and has it become intimate? Bethenny rarely keeps her relationships under wraps for very long. During the first season of “RHONYC” she had no problem showing off her boyfriend Jason (not the Jason she eventually married) and backing him into a corner about moving in together and getting married.

When she began dating Jason Hoppy (the Jason she did marry and is now divorcing) it was such a HOT story that Bravo gave the Skinnygirl mogul her own show, “Bethenny Getting Married?” and its subsequent follow-up, “Bethenny Ever After.” Following her separation and ensuing nasty custody battle, Frankel began dating Michael Cerussi and it wasn’t long before the couple went public with a romantic vacation over the holiday season in 2013. One of the hot topics during this past season of “The Real Housewives of New York City” was Bethenny’s love life, which she really was not at liberty to discuss on camera.

Of course it could all be a ploy to advertise a new business venture, perhaps something that will be featured on her website. But fans know she can’t keep her mouth shut for long and that the mystery behind the black licorice in mason jars will come out sooner rather than later. Bethenny Frankel better be careful because estranged hubby Jason Hoppy keeps a pretty close eye on her. He’ll use whatever – anything unseemly against her in court if he feels their daughter Bryn’s safety is in jeopardy.