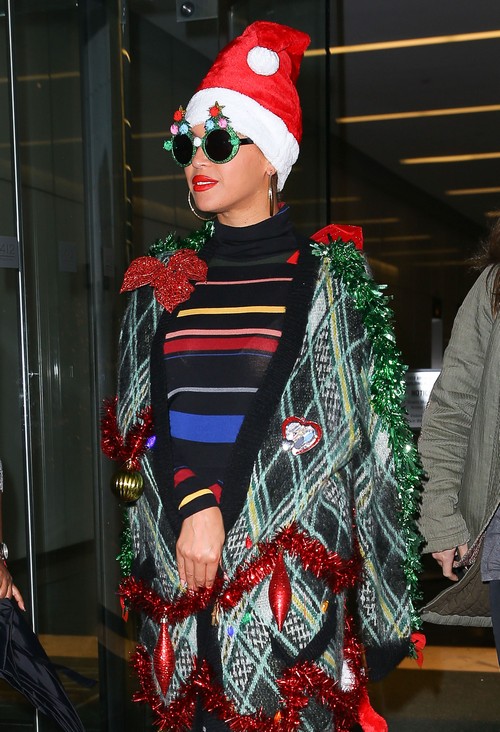 Beyonce and Jay-Z’s Christmas party was ignored by Kim Kardashian and Kanye West. Is Kimye too cool for the music power couple? CDL has photos of a festively dressed Beyonce, while Jay opted to be a Scrooge in black garb accented with a camouflage jacket.

A slew of celebrity pals attended Beyonce and Jay-Z’s Christmas party. The music moguls hosted a bash at their office in New York. But, Kim Kardashian and Kayne West were not among the guests who joined Jay-Z and Beyonce’s holiday celebrations. Was Kimye not invited? Or, was it more likely Kim and Kayne didn’t want to go?

It’s pretty obvious that Kardashian and West have cornered the market. The reality star and rapper are a bigger presence in the celebrity game and dominate social media. Tides have turned since Kim was begging to be friends with Beyoncé.

Kardashian practically bent over backwards to get in good with Beyonce, but the ‘Drunken Love’ singer and Jay-Z blew off Kim and her wedding with Kanye. Now, Beyonce and Jay-Z are struggling with constant marriage troubles that were exposed with the famous elevator brawl.

Solange, Beyonce’s sister, attacked Jay and accused him of being a cheating slime who disrespected Beyonce with his wandering eye.

In addition to the crumbling marriage, the Bey and Jay party barely made more than a blip in the media, and the only reason it got any attention at all was because Beyonce looked like she was dressed by Elton John or Lady Gaga in a tinsel festooned sweater. Maybe if Kimye had been there, they would have gotten more attention?

Beyonce and Jay-Z still have A-list status, but Kim and Kayne are a bigger deal – surpassing the music couple in business, popularity, and everywhere else. Kardashian appears to be having the last laugh as

Beyonce and Jay finally see that Kim Kardashian and Kanye West could help them maintain their relevance. I guess Bey should have been a bit nicer to Kim!

What do you think? Was Beyoncé and Jay-Z’s Christmas party ignored by Kim Kardashian? Is Kimye too cool for the music power couple?

Beyonce Knowles and Jay-Z are seen leaving a Christmas party that they hosted at they office in New York City, New York on December 14, 2015. Beyonce was dressed in the Christmas spirit while Jay-Z was not. FameFlynet