Beyonce Jealous as Jay-Z and Rihanna Hug Up for Pics at Roc Nation Sports Debut: Skewered by Boxer Adrien Broner 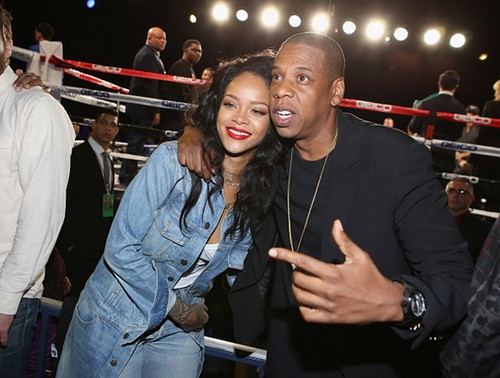 Is Beyonce jealous as Jay-Z and Rihanna hug up for pics at Roc Nation Sports debut —both skewered by boxer Adrien Broner over a deal gone bad? Jay-Z and Rihanna haven’t been spotted together in quite some time, probably just as jealous Mrs. Carter (aka Beyonce) likes it, but that didn’t stop the two from getting in close for pics at the debut of Jay-Z’s new venture under Roc Nation Sports and for getting slammed by boxer Adrien Broner after feeling disrespected by Roc Nation’s offer to sign him for far less than he thinks he’s worth.

Adrien Broner has never been one to mince words, but this time he took it to another level by taking an offer presented by Jay-Z’s Roc Nation Sports, chewing it, and spitting it out in their face laughing it off as being disrespectful. He shared his feelings about it on Facebook by saying, “These the type emails I turn down. F-ck JAYZ Sh-t real out here #AboutBillions What the f-ck is 40 million for 5 years ha somebody go tell JAYZ to suck my d-ck with a elephant tongue WE GOOOOOD!!!!!!”

The boxer then went on to tell TMZ that Jay-Z should have contacted him himself after the Roc Nation proposal was turned down saying, “It is what it is, because at the end of the day, I felt disrespected. If you’re gonna come to me and tell me that I’m gonna fight two times a year, getting $8 million a year for five years straight? You got me fucked up.”

The conversation turned to Rihanna after Adrien was asked if he may later regret turning down the offer that could have gotten him closer to the singer. Broner responded with, “Man, f-ck Rihanna. No disrespect. Rihanna ain’t gon make me no dollar and she don’t make no dollar for me, man. At the end of the day, she gon’ give me some p-ssy and that’s it.”

He is seriously crude—but that didn’t stop Jay-Z and Rihanna from catching up, taking pics with fans, and looking mighty happy together at the inaugural event. Jay just partnered with Shaw Promotions, giving him 20 new boxers under Roc Nation Sports. I wonder if Jay-Z’s just loading up on boxers so he can use them as security around wife Beyonce’s sister Solange Knowles who famously beat Jay-Z’s a** in an elevator after a heated argument.

CDLers… did Adrien Broner take it too far? Or did he just take it in the wrong direction? Tell us below!