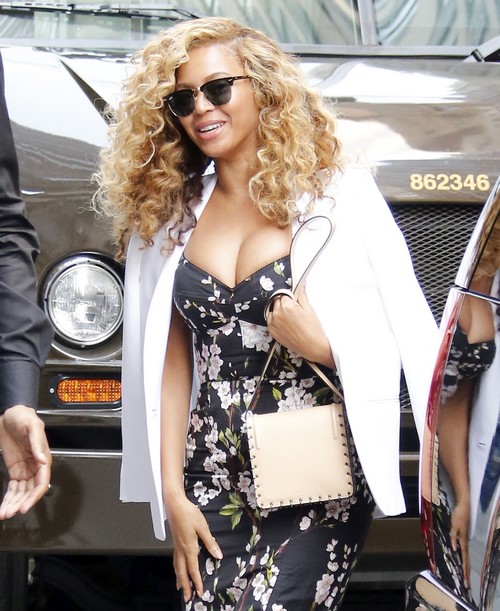 Beyonce is reportedly pregnant with baby number two! Beyonce and her husband Jay-Z have been on the verge of a divorce for months, and the main reason for their fighting was rumored to be their fertility woes. It’s no secret that Beyonce wanted to have a baby brother or sister for their daughter Blue Ivy, but she was having difficulty conceiving. Earlier this summer reports hit the internet claiming that she was undergoing IVF treatments – and it looks like they were successful.

This week’s edition of OK! Magazine is reporting that Beyonce and Jay-Z have another baby on the way, and the singer is finally pregnant. A source close to the couple dished to OK! Magazine, “Even though she is barely showing, she is paranoid that someone will pick up on it, so she is hiding her stomach whenever she is out. They have gone through so much to get here that they don’t want to jinx it by telling everyone before the three month mark.”

Right now, Beyonce and Jay-Z are busying themselves planning a huge pregnancy announcement – they want Blue Ivy to be a part of it. If you remember, back in 2011 when Bey was pregnant with Blue, she ripped open her shirt on stage during a concert and exposed her baby bump after months of pregnancy rumors followed her. This time around, they want the big news to be even more of a shock to fans.

It’s safe to say that Beyonce and Jay-Z have probably shelved their divorce for the time being, although we’re pretty sure their marriage is nothing more than a business agreement at this point anyways. Are you excited that Bey is finally pregnant with baby number two? Will it be a boy or a girl? And, will his or her name be as unique as Blue’s? Let us know what you think in the comments below!