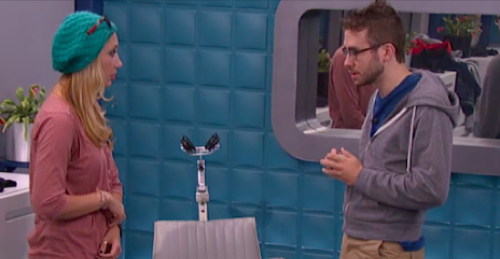 Tonight on CBS Big Brother 17 airs with an all new Thursday August 27, season 17 episode 29 called “Live Eviction, HoH & Juror Returns”, we’ve got your recap down below! On tonight’s episode the Power of Veto competition is held.

On tonight’s BB17 as per the CBS synopsis “a vote determines who is evicted; the remaining house guests compete for the head of household position and a juror member returns.”

#BB17 begins with John and Steve nominated and waiting for the eviction vote. Also tonight, an ousted house guest will get to come back in the game. Shelli, Becky, Jackie and whomever gets voted out will compete for the chance. Vanessa remains the most manipulative character in the house. John hopes that Vanessa’s anger at Steve will get him voted out.

Steve is upset and wants to get in a rational state of mind. James thinks either of them can go and is just glad it’s not her or Meg on the block. Vanessa starts crying – yet again – and she is worried she’s lower on the totem pole with the twins and Austin. They tell her that Steve and John were the ones targeting her. She boo hoos and says she knows it was Steve.

The twins try and smooth things over with her. Vanessa talks about Steve’s disloyalty. Steve comes upstairs and Vanessa tells him to live her alone so he walks away. She says she’s upset with Steve for orchestrating. The twins then tell her that John was just as culpable. Vanessa says she doesn’t blame them. Austin and Liz go talk to John about why he told Vanessa what he did.

Liz asks to talk to him. She asks why he told Vanessa about the five person deal. John says he knows he was after her too and he says they went back on the deal and put he and Steve on the block. Liz says it’s weird of him to say it when he has a chance to stay. John says he doesn’t think he doesn’t since they like Steve better. Liz says he pissed her off and he’s going to blab if his back is against the wall.

She asks if his strategy is to try and get the twins’ vote or the other’s. He wants her to vote for Meg and James but Vanessa won’t vote differently against the twins and Austin. Steve talks to Vanessa who says she doesn’t want to talk to him. Vanessa says he never told her about the alliance against her. He says nothing happened with it. He says that conversation happened this week. She asks what this is.

She asks if he knows what she knows. She says he’s going home if he doesn’t come clean. Steve is intimidated and his brain is freezing. John comes in the room and Vanessa asks about the alliance and John says it was last week which is not what Steve said. He says he’s putting things together wrong in his head and Vanessa calls him shady. John leaves to go brush his teeth.

Vanessa says he’s being too faced and then starts her annoying crying again. She says she’s so hurt by him. Serially, she’s the biggest whiner on BB history. John comes to talk to the twins and she says they’re all voting with Vanessa. Liz asks if he will come after them. He asks who they would want him to go after if he wins HOH. He says they would go after the returned juror.

John is hoping that Steve will go and he’ll be safe. Liz says she has to be able to trust John and isn’t sure if she can. Vanessa comes in and the twins tell her she’s the swing vote. Vanessa says she will vote with the twins. They talk about Steve and call him a floater. Liz says Steve wasn’t going outright after her but Johnny Mac was going after Vanessa.

Then they talk about if Jackie comes back, Steve would go after her. Vanessa says going against Steve at the end for votes would be hard. We next get a look at how prankster James is back home. #CaptainCamo and Meg play pool and talk like they’re playing pool at a bar. Back in Wichita Falls, Texas, we see James’ friends. They all call him the #HillbillyAsian.

His friend Whitney says he’s just wild. Brett says you can’t fall asleep around James and we see him pour honey into a sleeping Steve’s mouth and jumping out of the wardrobe at Julia. Steve tells James that he’s up to no good when he’s wearing the cat hat. James has a cat Gizmo that goes fishing with him on the boat. James says his cat swims and tells the others about him.

Whitney says James watches chick flicks with her. We see him telling Meg to fix her eyeliner. Whitney says he’s a great guy to play around with. Brett says James has a huge crash on Meg because he likes blondes who are taller than him. Whitney says nothing will come of it. Whitney says she’s glad James has hers and his friends say James has the best social game in the house.

Brett says he hopes James wins because he owes him $20. Julie says the house guests were still undecided leading up to the vote. Steve and John get to make their final statement. John says Steve knows a lot about a lot of BB things and he doesn’t but he’s really good at picking up his own dishes and gas management. Julie asks if Steve is bad at gas management and John says no.

Steve says he appreciates the support back home then tells the others, he’s a nerdy socially awkward guy who loves his mom. He says he’s had a lot of great experiences there. He thanks them for being part of his lifelong dream. He says he hopes they vote for him. He did a great speech. Now Julie calls for the vote.

John finds out that he’s out of the house and it was a 5-0 vote to evict him. He comes out to a cheering crowd and shakes Julie’s hand. Inside the house, they watch his photo go gray. Liz mentions that the crowd went insane for John. He tells Julie he knew it was coming. Julie says he thought he was safe when Austin got HOH and she asks what went wrong.

John says their aligned with everyone and they’re good. He says he means Austin and the twins. He says he’s mad it happened to him, but he’s over it. Julie is laughing so hard at his laugh. Julie says he was a loner for a while then built alliances that didn’t stick. She asks why others didn’t take them seriously. John says a lot of people don’t take him seriously.

He says the problem was he got a reputation as someone who won comps but then didn’t and he couldn’t back it up. Julie says he knows how to throw a comp and he agrees. Julie asks if him going after Vanessa is why he’s there. John says you have to have enemies to play and says it worked in his favor last week. Julie says he bonded with Vanessa in the last few days.

He says he would have worked with Vanessa and says Austin and the twins won’t turn on each other and neither will Meg and James. John watches the videos. Austin says he has long wanted to align with him but they never talked game and tells him not to take it personally. Vanessa says this week they started from scratch and she fought to have him stay. Julia says it was a rough week.

She says he’s the coolest rock star dentist. Steve tells John he knows he can rely on and trust him and hates that they were on the block together. John says Steve is so adorable. Julie asks if he gets to go back in the house who is he going after. John says probably Meg and not Austin and the twins. He says they need to be broken apart so they can’t be used as allies.

Now it’s time for the chance for jurors to get back into the game. We see the #BBJury. Shelli says the jury house is so low key and they just hang out all the time. Jackie and Shelli are surprised to see Becky. Jackie hoped it wouldn’t be Becky, James or Meg. Becky says she made some bad game moves and it cost her. She says Liz came after her. Then they see she has a bandage and her toe is infected.

They watch the HOH competition for Becky’s week and see that she and Johnny Mac got nominated. Then they see the Otev POV and watch Meg fall on her face. Liz also won POV on top of HOH. Then it was unanimous to send Becky out. Jackie says one of them will be going back. Becky thinks that Liz needs to go since she has a twin and a showmance. Shelli wants to be the first juror to win it all.

Then Julie says they all need to head to the backyard for the battle. Austin sits out of the combination HOH and return to the house competition. They hold on to fight dizziness. The last juror standing is back in and the last person standing is HOH. They hang onto a rope with a foot stand and the ropes start to swirl slowly. They rotate around and when they hit a big soft hand, it sends them spinning more.

Steve, Julia and Meg are out. The others are still hanging in when the show ends.