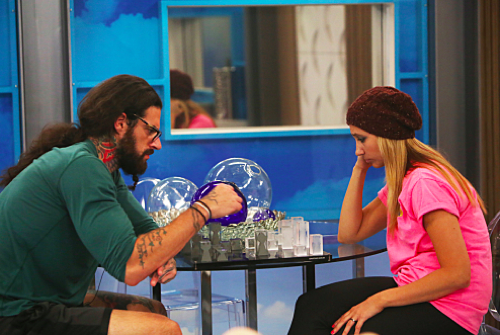 Tonight on CBS Big Brother 17 airs with an all new Tuesday September 15, season 17 episode 37 called “Episode 37”, we’ve got your recap down below! On tonight’s episode the Power of Veto competition is held and it a special eviction episode.

On the last Big Brother, nominees for the eviction are revealed. Did you watch the last episode? If you missed it we have a full and detailed recap, right here for you.

On tonight’s BB17 as per the CBS synopsis “the Power of Veto competition is held, followed by an eviction. Later, a new Head of Household contest takes place.”

#BB17 starts with an eviction blindside. Julie tells them all to gather in the living room and says not to use the eviction chairs. The five come in and John says she’s not allowed to be there right now. Julie says they are going to do a surprise eviction episode and says within the hour one of them will be at the jury house and there will be a new #HOH.

Julie says with Vanessa in power, she’s caught between two alliances. We see flashback to the end of the nomination ceremony and Steve is upset that Vanessa paired with Austin and Liz. John says he’s going to win the veto or pull some other tricks to stay. Vanessa says that John is her main target and she had to put Steve up with him and she doesn’t like that.

Steve goes upstairs and hugs her and she says he’s her friend and she cries – she’s always crying. Steve thinks later that she’s trying to get him to feel bad even though she’s the one who did this. Steve says he trusts them and she says she just has to go with her gut. She tells Steve he’s not going home this week and they hug it out.

John catches up with Liz and Austin and he says he figured out what’s going on and says he’s figured out he’s out of the club. Then he tells Austin that he doesn’t know what deal they have with Vanessa but he would throw the veto to him if they would keep him. He hopes they will trust him more than Vanessa. Austin says it’s a good offer. John says he’s fine to go with them and knows he’d be the third man out. John leaves them to talk. Austin thinks about the offer to throw the veto to him.

Austin wonders if John has lost his marbles or has become one with Judas. Vanessa comes him and Austin tells her that John offered to throw the veto to them if they’ll keep him safe. Vanessa backs up and says she can’t believe he offered to throw the veto and says that would be amazing. She wonders what he’s thinking. Vanessa calls them for the veto competition. She says one wins the POV and they all get to watch Life in Pieces, a new show premiere.

They get a look at the trailer for the TV show. They all seem to enjoy it then it’s time for the Power of Veto competition. Outside we see a challenge based on the show. It’s set up like a suburban backyard. They have to put together a large puzzle based on the show. They have to race across a balance beam and you have just a few seconds to hit your buzzer to keep your board from demagnetizing. The first to get the puzzle done wins #POV.

John thinks he can throw it to Liz and Austin or win it for himself if Steve gets close and isn’t sure what he’ll do yet. They start. Vanessa loses her board and she’s out of it because she lost track of time. Austin wonders if John will really throw the veto to them. Steve is struggling because of his balance. He steps off and his puzzle tumbles. John is building the puzzle in the trough so he doesn’t have to worry about the magnetics.

Austin’s pieces fall and he has to start over – it happens again and again. Liz is doing well and she’s almost done but a couple of pieces are lost. John sees that Steve is close to being done so he decides to try and win it. Johnny Mac wins the #POV. Vanessa hands the medallion over but she’s not happy. Austin says now he has to talk to Vanessa to decide if she’s going to try and keep them in the game or if he and Liz are in trouble.

They head inside and talk about how close it was. Vanessa says it’s a hell of a comp. Johnny Mac is thrilled they can’t send him home and one of them has to go instead. Vanessa goes upstairs and talks to herself and bawls. She says with him in the game that changes everything – she’s crying AGAIN – OMG can she just not cry? How annoying… Liz and Austin wonder which of them will go up in John’s place and whether they have the votes.

They tell John it was a good job and Liz says she was almost done and he says Steve was almost done so he had to. John tells them that he still feels the same way. They talk about it being John and one of them that controls the votes. Steve says he hopes that Vanessa is still crying and says she should have put up the showmance. He says she can cry her f-ing eyes out and says the tie breaker will go to Vanessa and she’ll hopefully be smart and vote against them.

He goes to talk to Vanessa who says she wants alone time and won’t talk to him. Austin comes up and says John is hard to beat. He says he can’t believe he pulled it out again. Vanessa says one of them has to go up and says they have the votes. Vanessa says she didn’t want to send Steve home this week and it sucks. John ponders his veto options and, of course, decides to save himself. Vanessa says Liz was on the block last week so she’s putting Austin up this week. He unhappily takes a seat.

John adjourns the veto meeting. Austin says he’s okay to be on the block to show he trusts Vanessa but he’s also worried Vanessa might take the chance to take him out. Steve really hopes that they keep him. John has to decide to vote Steve out or leave it up to Vanessa. John goes to talk to Vanessa who says his game play is one of a kind. She asks if he’s going to vote to keep Steve and he says Steve would be mad, but oh well. Vanessa asks if they’d be dumb not to break up Lizten.

They agree it would be dumb and says if they keep Steve if they vote out Austin. They shake on it. John thinks later if she wants Austin out, maybe it’s not the best move for him. Then John talks to Austin and says he’s crazy enough to take a showmance to the final three. He wonders if he should keep Austin to tick off Vanessa. Austin says he’s insane. He thinks later how much Judas loves that Johnny Mac is trying to do this. He hopes this will work out in their favor.

Julie says it’s time to decide who’s evicted. Steve and Austin get to make their statement. Steve says he didn’t prepare anything since it’s a surprise eviction. He says this is a dream for him to play this game and says it’s mind blowing and he’ll always be thankful for it. Austin says he didn’t think he’d make it that far and gives a promo for the new TV show. He says he and Steve are best friends now and have both wanted to play. He wishes Steve luck and says they will always be best friends.

Liz goes first and votes to evict Steve. John votes to evict Austin. That throws it to Vanessa to break the tie. Julie tells Vanessa that she now has to vote. Vanessa stands and says this is brutal and she’s making a game decision. She tells him she’s sorry but he’s an unbelievable strategist and he says she can’t win the game and was stupid and won’t have the jury votes. She says she knows. Austin comes out barefoot with no luggage because he wasn’t prepared to go.

Liz cries and everyone hugs her. Vanessa then starts crying YET AGAIN. Julie says no shoes means he didn’t expect to be evicted his first time on the block. She asks about his day two alliance with Vanessa. Austin says she saw a chance to take Liz out because if Liz doesn’t win HOH or veto, Vanessa will take her out. He says Vanessa scumbagged him and won’t win with the jury no matter what. Julie asks him about Liz and he says she’s the most important thing he will take from this experience.

It’s now time for the #HOH competition. It’s John, Liz and Steve playing. The HOH will be guaranteed a spot in the final three. It’s called what the bleep and they see clips during the season and there will be a bleeped out word or phrase and they choose true or false when Julie tells them the word. The first is about Julie and it’s true – it was Julia complaining about never being picked. They all get a point. Next is Becky and the word was not camping and they all guess false – it was hiking. They are tied at 2.
The third is a clip of Jackie and the bleeped word is blood. Steve gets the point and takes the lead 3-2-2. Next is a clip of Jace and it’s bleep me through the back door. Julie says throw and they all say false. They are at 4-3-3. Meg’s clip is next and Julia says “made” and John guesses false. John got it right. That makes it 4-4-3 with Liz in last place. Two clips to go. James’ clip is next and the bleeped phrase was “play pranks.” They all get it wrong. It’s still 4-4-3. Last clip is Vanessa reading a letter. Liz answers false.

That makes it 5-5-3 and Liz will be eliminated. John and Steve go to a tie breaker. They have to guess a number and come closest without going over. She asks how long did the rainbow egg competition last, in seconds. John has 3600 and Steve has 601. Steve wins the #HOH.