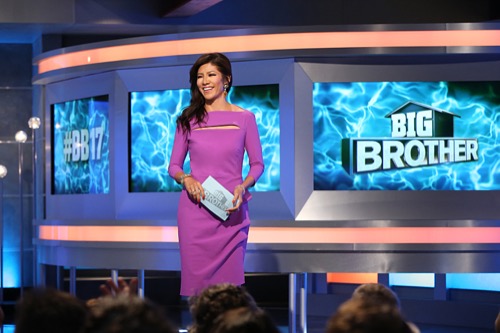 Tonight on CBS Big Brother 17 airs with an all new Sunday September 20, season 17 episode 39 called ‘Part 1 of Final HoH,’ we’ve got your recap down below! On tonight’s episode, Big Brother will feature footage from the first part of the final HOH competition.

On the last Big Brother, another houseguest was evicted from the compound. The final three were revealed. Did you watch the last episode? If you missed it we have a full and detailed recap, right here for you.

Related: If you want to know who won Final HOH Round 1 and Round 2 Check Out our Spoilers Here!

On tonight’s BB17 as per the CBS synopsis “Final 3 brunch with discussion about events this season.  Start of Part 1 of the Final HoH competition.”

#BB17 starts with the final three in the house – Liz, Steve and Vanessa. The #Final3 pop a bottle of champagne and Vanessa is hoping that Liz or Steve will take her to final two. Steve is upset that he lost John, but also thinks that he would have lost to him in the final two. Liz is thrilled that John is gone and wants to take Vanessa to final two. Vanessa says this must be hard on Steve knowing he’s in a weaker position. Liz is certain that Vanessa will bring her over Steve.

Vanessa tells Steve she thought John would have made a better speech but he says John knew he was going. Steve asks Vanessa if she made a final two deal with Liz and she says it’s not true. Steve says he thinks she would have made some promises to Liz and she says no. Vanessa tells him that Liz made her promises. Steve tells Vanessa that she has a better shot at the win if she takes him to final two. Vanessa says she did a lot in this game and some people wouldn’t let her win.

Steve secretly wants to go to jury with Liz because he thinks he can beat her for jury votes. They wake to a fancy breakfast and talk about the whole season. They talk about the #TwinTwist. Liz says that Jason busted her out but we see it was Da’Vonne that first caught them out. We see Vanessa confronting Austin about throwing the competition then her making the move to evict Jeff. We see a flashback to Vanessa confronting Jeff in the bathroom and telling him he sealed his fate.

Then Vanessa talks showmance and Liz says Austin worked his way into her heart. Steve says Austin and her was so far out of left field. We see flashback of Austin tickling Liz and her saying she doesn’t see him romantically. Then we see the first kiss and her calling him annoying. We see Liz going from not liking him to liking him then a look at the Zingbot busting Austin out on having a GF. Then we see Liz saying he was dating this girl for 18 months. Then we see Austin ask Liz to be his GF and her saying yes.

Steve says Austin kept working to get his way out of the friend zone but James could never get out of that zone with Meg. We get a look back at James and Meg. Then next is John and Steve’s #Nerdmance. Steve says he loves Johnny Mac a lot and it’s a total bromance. John talks about flirting with everyone including Steve and we see them cuddling. John says they have broken new ground with their nerdmance. Liz talks about how all the girls wanted Clay.

We see a look back at Shelli and Clay and the gang teasing them about going on their first date. Then we get a look at them kissing. Shelli says the kiss was worth the wait. Liz says them being on the block together was epic. We see Vanessa confronting James about Clay telling stories on James. James goes to tell Clay to quit talking about him and Clay tells him to shut up. They sling mud at each other and it got really confrontational.

Vanessa and the others talk about the mix of people that were in the house. Liz talks about Becky and her train thing. Then we see Becky telling her train story and all about her horrific injuries as a result and how she didn’t have to have any plastic surgery. She talks about how it changed her life and how it changed her into a really basic bitch now. Jackie is stunned and wants to align with her now that she’s heard this story.

Now they talk about Clay’s mumbling and how hard it was to understand him. We see Shelli telling him that he mumbles then a montage of all of Clay’s mumbling. John thinks Clay may have had a head injury from his years of playing football. Steve then brings up transgender house guest Audrey. We see Audrey talking about how she’s representing a repressed minority. Liz says Audrey stirred up a lot in the house and we see a flashback to Audrey confronting Da’Vonne and the house imploding.

Then we see a look back at the Whack Street Boys John, Julia and Liz. Vanessa then says the Diary Room was probably a lot of tears and screaming and says she kept it real in there. We see a montage of Diary Room stuff including Audrey in her blanket. Clay sits and says he doesn’t know what to say. Jason says Big Brother is his life. Jason calls Vanessa a scumbag bitch. Audrey pus the blanket completely over her head and Steve pacing and going crazy. Then we see a montage of them crying.

Liz talks about Austin and their fights then says the food fight was worst. We see Liz complaining about the chicken and he says to make it herself next time and says not to be a bitch when he made food for her. She laughs at him calling her a bitch. He says her vegetables suck. Then he throws some food at her. She laughs and John says she has stuff on her boobs. Then she threw food at him. Vanessa says they are down to final three and only one of them can win the $500k.

Finally it’s time for the #HOHPart1. They head into the backyard and it looks like a carnival. There’s popcorn and then three candy apples that Steve says he knows they’ll have to sit on them. He reads the instructions. They will all three play How Bout Them Apples. They all have to hang on to an apple on a rope and Steve is excited to be there and says this is the moment he’s been dreaming about for so long – the endurance challenge.