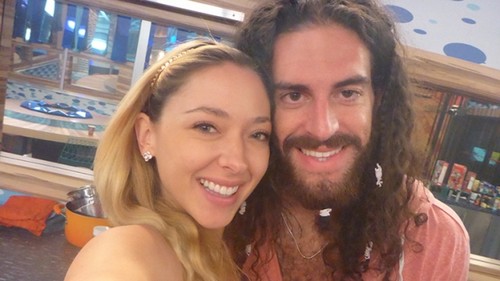 “Big Brother 17” spoilers are rolling in and the Week 12 Power of Veto competition was played and Vanessa is not happy with who took home the win. For Vanessa, the current Head of Household, it was a worst-case scenario. As CDL reported earlier, Johnny Mac won the veto this week, securing a spot in the final four. Now, Vanessa must name a replacement nominee – sending Steve or one of Liztin to the jury house.

Right after the feed returned after the latest blackout, Liztin talked quietly among themseleves while Vanessa tried to figure out who was the best person to name as the replacement nominee. She used M&M’s to play out every possible scenario in her head. She needed someone to target because she was not keen about the idea of letting Steve go just yet. He vowed to keep her safe next week.

Vanessa spoke with Steve first. He is on the block and nervous that Johnny Mac was coming off the block. He told Vanessa that he felt like Liztin could sway Johnny Mac to get him voted off. Vanessa assured him he was ‘100% safe.’ She told him that he had to trust her. Steve said he does, but the look on his face revealed he was nervous about his fate in the game.

Next up, Vanessa spoke with Liz. She told Vanessa that she did not want to go on the block. She just came off the block, after spending the week on the chopping block with Nolan sister Julia. Vanessa asked Liz, “Do you trust Austin?” Liz told Vanessa that she wanted to believe she can, but they came to the house as individuals, so she has to play the game as one. Liz urged Vanessa to put him on the block over her but told her not to tell him that. She told her to send Austin up to talk to her next. Now that’s what you call true love!

Vanessa told Austin that someone had to go up in Johnny Mac’s place, and her choices are limited; it is between him and Liz. He offered to go on the block by saying, “If you need me to go up, I will. I trust you.” He told her that Steve and Johnny were dangerous. Austin explained that he liked John, but he confuses him daily. Vanessa agreed that John’s behavior can be sort of erratic. They rehashed that Steve would leave the house for sure; Austin told her he was nervous being on the block because he feels like he COULD be the intended target. Vanessa assured him he wasn’t. OMG – does Vanessa even know HOW to tell the truth?

Vanessa asked Johnny Mac, “How will you be voting. I assume you will vote to keep Steve, but would you consider going against him?” He replied, “I will vote, however, you want, but I really need to think about what is best for my game.” Vanessa assured him that Steve has been loyal to him and never would vote against him. She called them a ‘couple’ again. (Vanessa, it is called a bromance). She urged him to consider voting either Austin or Liz out of the game. Johnny Mac told her that he would rather be against Liz in the end than Austin, and she agreed. It looks like Austin will be the replacement nominee and the weekly target. The veto ceremony should take place Sunday afternoon. Don’t forget to check back later for more juicy “Big Brother 17” spoilers and updates.

Update: John took himself off the block and Vanessa nominated Austin in his place – right now we have Steve and Austin on the block and very much the target for eviction this week 12!