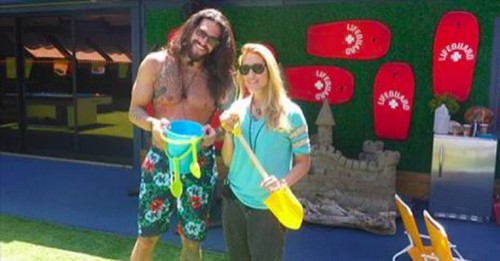 “Big Brother 17”spoilers shocking news to report, and this time it is something that has happened outside the BB17 house. A letter addressed to Austin is making waves on social media. There is no way of verifying who the letter came from; however, it is signed Jen (Austin’s girlfriend outside the house – or his ex-girlfriend). The letter basically lets him know they are no longer together, and Jen doesn’t want to speak to him ever again. Many fans are sharing this letter because it may be the best Dear John letter ever written.

The letter opens with Jen explaining that she screwed many of his friends, especially someone named Mike. She said she knew he wanted to appear on “Big Brother” to promote business relationships as a result of the show, claiming that Red Lobster and KFC were interested in him. Jen clearly was making fun of Austin referencing his sloppy make-out sessions with Liz when she said he could be the new face of the “Finger Licking Good” campaign.

The alleged ‘Jen’ told him he has a few very large charges on his credit cards after her trip to Cancun. She needed to get away for a few weeks to begin her life without him. Jen said because of her vacation, she was now strong enough to face the world without him in it. 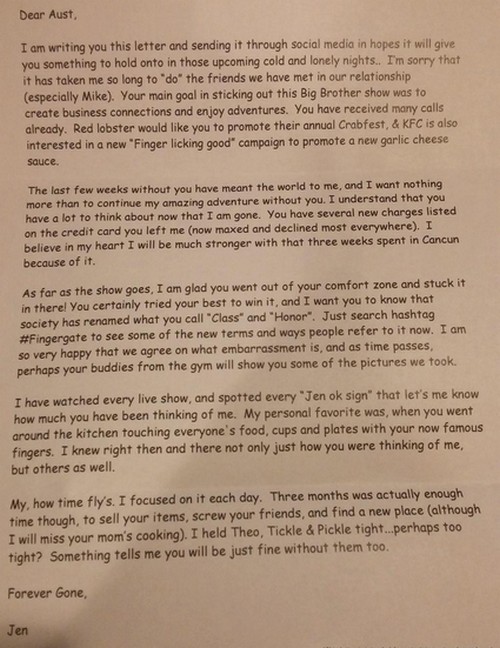 Jen said she was glad he stuck it out in the house – pushing through any barriers – even though it was difficult for him since he wanted to play the game with class and honor. She explained Austin tried his best to win the game and because of him, people renamed class with a new name. Now it is referred to as #fingergate. Jen urges Austin to look on social media to see how he redefined the term.

Jen revealed she watched every LIVE show, looking for the smallest sign she was on his mind. She said three months was enough time for her to sell all his belongings, screw all his friends, and move out of his home. Jen claimed she may have hurt his animals – Theo, Tickle and Pickle – by hugging them too tightly. She signed the letter forever gone.

There is no way to verify if the letter was written by his ex-girlfriend. If it is from her, she handled the whole Liz and Austin relationship with class, and she is much better off without him. The first time Austin has mentioned Jen was on last night’s episode. He told Liz he threw away a great relationship for her, and it ruined his life. Do you think the letter is from Austin’s ex, Jen? Come back later for more “Big Brother 17” spoilers and updates!