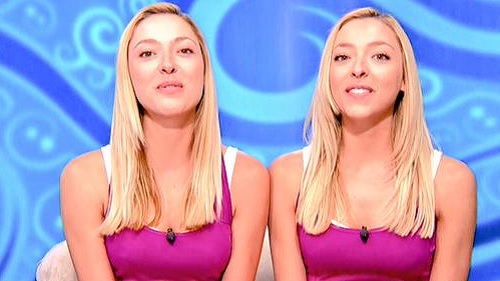 Big Brother 17 spoilers from the live feeds tease that the Twin Twist is going to blow up in Liz Nolan and her twin sister Julia’s face at any moment. Da’Vonne put two and two together and realized that there was something fishy going on with her fellow houseguest Liz. Da’Vonne took Jason aside and explained to him that she thought there was a Twin Twist in the house, just like on Season 5 – and that Liz was trading places with her sister. Da’Vonne recounted the difference in Liz’s face and hair throughout the day, and they remembered instances that Liz couldn’t remember conversations or events that had literally just happened.

It didn’t take long for Jason to run and tell basically the entire house what Da’Vonne had discovered. BB17 spoilers from the live feeds tease that the BB17 houseguests are currently on a mission to expose Liz and her twin sister Julia, and prove that there has been some switching going down. Meanwhile, spoilers also revealed that the POV ceremony has been completed: Da’Vonne and Meg are the final Week 2 nominees for eviction.

Right now, it doesn’t look good for Da’Vonne – she was hoping to use the Twin Twist as some sort of leverage to guarantee her safety in the house, but Jason basically blew that plan by telling the whole house her discovery. She should’ve just kept her mouth shut for a bit and sat on the information, pulling it out when she needed it most. However, that said, Da’Vonne also received the power of the Seventh Call, which gives her the ability to veto three houseguests’ votes. This obviously works to her advantage, but it still might not be enough to keep her in the game.

Big Brother season 17 spoilers tease that as long as Liz/Julia don’t get evicted by Week 5, then they can both play in the game as individuals – and the rest of the house will be basically screwed. Twin sisters are not going to betray each other, regardless of what kind of promises and alliances they make with the other players.

Do you think that Da’Vonne’s discovery will be able to save her from eviction? Will the BB17 houseguests rally together and evict the twins in time? Let us know what you think in the comments below and don’t forget to check CDL for all of your Big Brother spoilers and news!