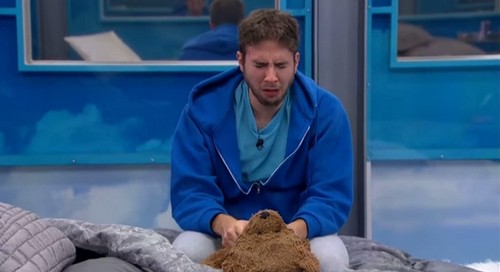 “Big Brother 17” spoilers are in and the live feeds are on fire with anticipation of the LIVE eviction on September 16. Steve won the Head of Household securing his spot in the final three. He nominated Vanessa and Johnny Mac for eviction. Vanessa knew she had to win the POV and pulled out a win. Vanessa will cast the sole vote to evict either Liz or Johnny Mac.

Steve won the Head of Household competition, but there was a catch. John and Steve were tied, and it went into a tie-breaker round. Steve wrote 601. Johnny Mac wrote 3600. The correct answer was 2800 (and maybe some change), Steve won the comp. Immediately following the win, Steve said, “Oh my God, I forgot to put a zero, I guessed 6,100.” It was an honest mistake, but poor Johnny Mac. He would have earned a spot in the final three.

Steve knew his nominations meant nothing. This week, the only position in the house that mattered was the Power of Veto. Winning the POV means that you cast the sole vote to evict – basically picking who you want to go against in the final three. He nominated Vanessa and Johnny Mac. Next up was the Veto challenge. Steve foolishly decided to throw the competition. He was safe, and he believed that Johnny Mac would pull off a huge win. It didn’t go as planned and Vanessa won the competition. Vanessa not only won the POV, but she secured a spot in the final three.

Steve knew this was a worst-case scenario for him and John. At 12:07 A.M BBT, Steve became inconsolable when he realized throwing the final four veto competition COULD be a game ending decision. He cried to his mom that he disappointed her. He expressed guilt for letting Johnny Mac down in the game, and be unable to protect him moving forward. “It wasn’t supposed to happen like this. Johnny Mac and I were meant to be in the final two together,” he sobbed cradling his teddy bear. After a good cry, he knew he had to talk to Vanessa about what her plans is at this point.

He found Vanessa and asked her which houseguest she was going to evict. She told him that keeping Liz was a risky move because she has two votes locked in – Austin and Julia. She worried that Liz may have planned a better game than her, but she felt that Johnny Mac could win the game against anyone. She said he was well-liked and won so many Veto comps. She told him it made sense to vote out Johnny Mac, but she wasn’t 100% sure, yet. He tried to convince her that Johnny Mac was the best person to take to the final three with them, but that information fell on deaf ears. Vanessa appeared to have her mind made up – Johnny Mac was her target, again.

In just a few hours, fans will find out which houseguest will join the jury house. Tonight, there will be an epic battle of endurance in part one of the last Head of Household competitions of the season. Who will win the competition? Who do you think will win “Big Brother 17?” Don’t forget to check back for more juicy “Big Brother 17” spoilers, rumors, and updates.