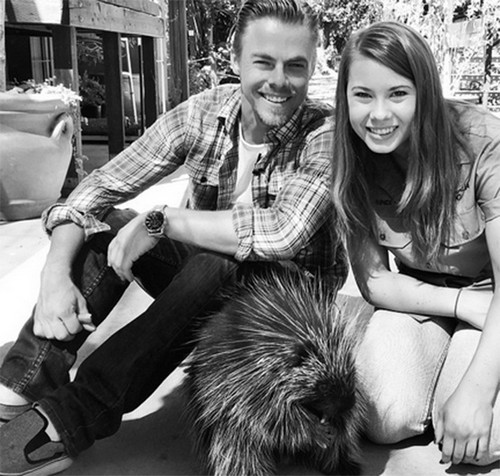 Are Dancing With The Stars couple Bindi Irwin and Derek Hough getting their own spin-off TV show. Since the DWTS Season 21 premiere, America has gotten to know the late Steve Irwin’s 17 year old daughter Bindi – and she is an obvious frontrunner and fan favorite, she and Derek have a real chance at taking home the Mirror Ball Trophy this season.

Since Derek met Bindi for their first Dancing With The Stars rehearsal, the pro dancer has been raving about her energy and how amazing she is – he is easily her biggest fan. Now, according to a new report, Derek believes in Bindi so much that he is pushing to get her a very own TV show of her own, which he would of course guest star on.

During a recent chat with E! Online, Derek joked that he is Bindi’s new manager. Then he confessed that he has been pitching show ideas to network executives about a spinoff for The Crocodile Hunter’s daughter. Derek dished to E!, “”I was actually talking to people last night [at the 2015 Emmy Awards], some of the network guys, and I was like, ‘We’ve got to get Bindi a show. We’ve got to figure out what it’s going to be; we’re going to figure it out.”

At this point, Derek Hough and Bindi Irwin are still in the early stages of Dancing With The Stars – but if the last two performances were any indication, they will most likely be going very far in the competition. If Derek and Bindi win Season 21, then their own reality TV show would be an even easier sell to ABC’s head honchos. We have seen stars of spin-off shows land a gig on DWTS. But, we haven’t seen someone land a spin-off show because of DWTS … yet.

What do you guys think? Would you watch Bindi Irwin’s own reality show? Could Derek Hough be on to something? Let us know what you think in the comments below!