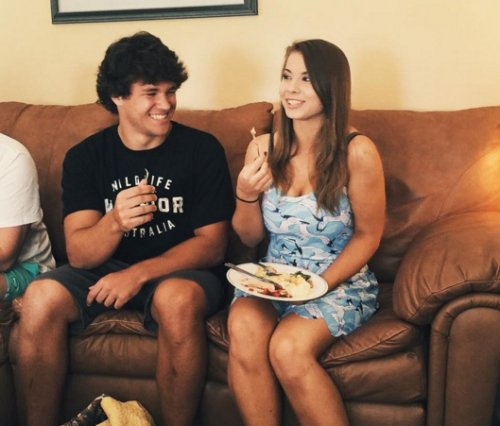 Bindi Irwin just won the mirrorball trophy on “Dancing With The Stars” but the 17-year says stories that she is planning to wed her 19-year old boyfriend Chandler Powell in Oregon before heading back to Australia are totally not true.

Australia’s New Idea magazine published a report claiming that Bindi planned to head to Oregon after her “DWTS” win so she can marry Chandler in the same place where her parents, Steve and Terri Irwin, were married.

The report claimed Bindi was planning the quickie wedding while she was still in the United States because Eugene, Oregon is where Terri Irwin is from. It also happens to be the place where her parents were married after a whirlwind romance.

While that idea is very romantic it is also not true. An Australia Zoo spokesperson said of the marriage rumor, “It’s not true. There’s been no proposal’. New Idea also suggested that Bindi was getting hitched in Oregon because they allow minors to marry with parental consent.

The thing is, there are no laws in Australia that would stop Bindi and Chandler from doing the same thing in their home country. Instead of a quickie Oregon wedding, the zoo insists that Bindi Irwin is headed back to Australia to celebrate her brother Robert’s birthday.

Although Irwin made it very clear that she’s crazy about her 19-year old boyfriend, she’s not getting married to him quite yet. Bindi and Chandler just went public with their relationship this year though they have known each other since 2013.

Chandler Powell is a Wildlife Warrior just like Bindi Irwin so the couple naturally get to spend a lot of time together. The animal-loving couple are so much like Bindi’s parents that they are drawing plenty of comparisons to Terri and Steve Irwin.

Bindi has followed in her parents footsteps and continues to carry on her father’s legacy. It wouldn’t be too surprising if Bindi and Chandler do end up heading back to the U.S. when it’s time to get married, it just isn’t happening right now.

The “Dancing With The Stars” champ is not in a hurry to do anything except get home and enjoy that brand new mirrorball trophy. Bindi is also probably anxious to get her paycheck situation straight so all that hard work can finally pay off too.