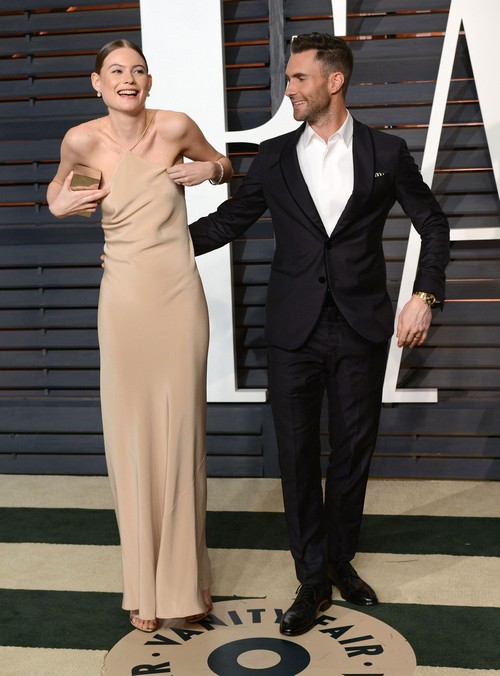 The Voice coaches Adam Levine and Blake Shelton are feuding – and it’s not staged for the cameras. Adam and Blake’s chemistry and constant bickering has become a centerpiece on the NBC singing competition over the years. But, according to a new report – the tension between Shelton and Levine is very REAL this season, and they are in a full-blown feud over Adam’s super model wife Behati Prinsloo.

According to National Enquirer, the feud heated up when Blake Shelton made some inappropriate comments about his fellow Voice coach Adam Levine’s wife in an interview. While they were filming promo packages for The Voice, Blake was asked which one of the judges he would trade places with.

Blake chose Adam Levine – because that meant he would get to have sex with Behati. Blake responded, “I would pick Adam because he’s married to a supermodel. Need I say more? I don’t give a f–k. That’s who I’m picking, and it’s because of his wife. Period.”

When Adam Levine heard the interview, he was furious and confronted Blake – National Enquirer’s sources say that the two men got in to a heated fight on the set of The Voice. This apparently isn’t the first time that Blake has crossed a line when it comes to Adam’s wife Behati.

The insider dished to the magazine, “Adam has tolerated his crude come-ons and incessant flirting with Behati. But no more! He really lit into him, barking that maybe he’d still be married if he wasn’t always chasing skirts. The guys were in each other’s faces!”

We are going to go out on a limb here and assume that the odds of Blake being sober when all of this went down are pretty slim. On the bright side, at least now Blake and Adam have something REAL to fight about on The Voice – rather than their typically staged disagreements and scripted “fights.” Do you think that Blake Shelton crossed a line, or is Adam Levine overreacting? Let us know what you think in the comments below!