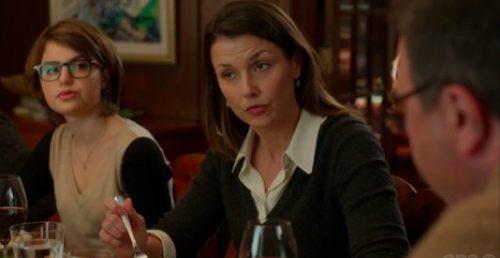 Tonight on CBS Blue Bloods continues with an all new Friday December 11, season 6 fall finale called, “Flags of Our Fathers.” and we have your weekly recap below. On tonight’s episode, Danny (Donnie Wahlberg) is interrogated by the District Attorney’s investigator when his ex-partner is accused of planting evidence in order to wrap up a homicide case.

On the last episode, a homicide case was reassigned to Erin after it resulted in a hung jury, and she and an ADA investigator tried to track down a missing witness. Elsewhere, Jamie and Eddie posed as senior citizens in order rid a neighborhood of a troublemaking gang. Did you watch the last episode? If you missed it we have you covered with a full and detailed recap right here for you.

On tonight’s episode as per the CBS synopsis, “Danny is interrogated by the District Attorney’s investigator when his ex-partner is accused of planting evidence in order to wrap up a homicide case. Also, when radical anti-government activists threaten to publicly burn an American flag, Frank grapples with the limits of free speech,”

Blue Bloods “Flags of Our Fathers” fall finale airs tonight at 10:00 pm ET and we will be live blogging all the details live for you right here. So don’t forget to come back and refresh your screen often for live updates. While you wait for tonight’s episode, sound off in the comments below and let us know what you think of season 6 of Blue Bloods so far, what has been your favorite moment?

Is it better to tell the truth or to lie? On tonight’s episode of “Blue Bloods” it seemed Danny was hit with a moral dilemma where he could either let a man he knew without a doubt was a killer get released from prison or he could have gone against his conscience by taking part in a cover-up that would ensure that man would never see the light of day. But while Danny is usually the one to find this type of trouble all on his own – this time it came as a price once he had to clean up after someone else’s mess.

Apparently Dany’s old partner Darryl Reid had done the one thing that every cop has been taught not to do. He stitched someone up by tampering with evidence in one of his cases. Although it should be noted that he did so in order to get a known neighborhood gangster on charges of murder and that there were witnesses to the murder but everyone had simply been too afraid to come forward. People do after all tend to keep their heads down if they feel like it would be safer to do so.

However it’s almost understandable why Darryl would go to the lengths he did. He wasn’t technically hurting anyone with what he had done. He was merely putting a murder away by any means necessary. And after seven years had passed with no one being the wiser, everything just began to fall apart after Marcus Donovan suddenly realized he had the means to overturn his verdict.

Darryl you see had taken the blood from the victims and had planted on Marcus’s shirt. So that’s how he was able to place Marcus at the crime scene. But surprisingly that wasn’t the worst part. The worst part was when it came out that Darryl had only gotten the blood after he stole it from the Medical Examiner’s officer.

And that counted as another felony.

One that worked against Darryl but played into Marcus’s “Woe is Me”. Therefore the only way to keep Darryl in prison was for Danny to do something. And unfortunately, not a single one of the legal channels were panning out for him.

He had spoken with everyone again and had retraced his steps in every way. Yet he ultimately ran into the same problem that Darryl faced. He knew Marcus was their guy but they didn’t have the evidence to take him down for it.

And then a witness abruptly came forward out of the blue. So Danny had Baez take the testimony and he went to go have a little chat with his old partner. Darryl had already been told that he would be facing jail time so Danny knew who would be desperate enough to threaten a witness into keeping Marcus in jail.

Though, at first, Darryl did want to keep Danny’s hands clean. He hadn’t told Danny about what he was planning to do (like last time) and he found a way to get Marcus on the double murder he did in fact commit (again like last time). Only this time Danny knew better than to trust something that had fallen into his hands.

So he knew that if he gave the District Attorney’s office the changed testimony that he would be taking part in another cover-up. And Danny wasn’t sure if he wanted to be that kind of a cop.

Earlier, Jamie and Jenko had gone to a middle school to introduce cops to the kids and tell them about what is they do when one thirteen year old scoffed at their “Protect & Serve”. Lily said her father hadn’t been doing anything wrong when one day cops shot and killed him. And so in her eyes, all cops were murderers.

But neither Jamir nor Jenko wanted the young girl to walk away with such a jaded opinion. So they talked with Lily’s teacher about what kind of girl Lily was and they found out the girl’s life had just been going downhill since her dad died. Her mother had apparently abandoned her not long after that with her grandmother and her grandmother couldn’t handle someone like Lily. Who was mad at the world.

Therefore Jamie decided to look into Lily’s father and read the man’s police file. Yet what he found didn’t quite match Lily’s story. Her father was a drug dealer who pulled a guy, in front of witnesses, after cops caught him in the middle of a transaction. Only what that meant for Lily was that her mother lied to her about her dad.

Prior to running away that is because she had her own well-documented substance abuse problems.

And so Lily didn’t want to stick around in New York after that. She wanted to run away too where she could possibly start over without anyone else making her face the truth about her dad but Jamie and Jenko weren’t going to let her run from her problems. They instead introduced her to the officer that had been involved in shooting.

It seems the former detective needed a change himself so he quit his job and went to go work at a youth center. He says the place has given a purpose when he really needed and he left behind a brochure in case Lily ever wanted to come down. However, before he left, he did tell her that he was sorry.

He could see how much her father meant to her.

So later, once he had left anyways, Lily did look at the brochure. Now it’s unsure if she’ll go but the fact she even looked says a lot.

And, well, Frank had his own set of problems on tonight’s episode yet he found a way of stopping a young man from burning the American Flag on Veteran property.

David Gore was holding a rally called “Battle for Peace” and he needed Frank to sign off it despite knowing that David and his friends were planning on burning the flag. But what could Frank do. He couldn’t refused them their rights and he couldn’t leave them unprotected. So he gave David the necessary form to hold a rally.

And the first one ended in a brawl. David and his friends were hurt, veterans were hurt, a couple of police officers even wounded up in the hospital. Yet David said he had to hold another rally seeing as they didn’t get to burn the flag the first time. So Frank gave them the permission but he said if they were going to do it then they had to do it as Oakdale Memorial.

Now Oakdale was where David’s own father was buried after the other man had been killed in action. So Frank to the risk of believing that David wouldn’t burn a flag over his own father’s grave and he was right. David couldn’t do it when the veteran he was insulting was his own father.

Therefore truth and a tad bit of trickery was what the day.

And when it came time for Danny to make his decision, he knew he couldn’t hand over a coerced testimony.