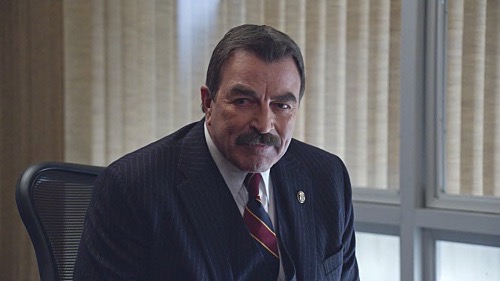 Tonight on CBS Blue Bloods continues with an all new Friday April 3, season 5 episode 19 called, “Through the Looking Glass” and we have your weekly recap below. On tonight’s episode, Frank [Tom Selleck] spars with a journalist who protects her source at all costs, even though the source admits to being a killer. Elsewhere, Danny [Donnie Wahlberg] participates in an NYPD program that requires him to mentor a troubled teen.

On the last episode, Eddie went on her first undercover operation to investigate a kidnapping ring targeting young women via fake youth hostel websites. Meanwhile, Frank helped a woman he knew from early in his career meet the inmate who killed her family. Did you watch the last episode? If you missed it, we have a full and detailed recap right here for you.

On tonight’s episode as per the CBS synopsis, “Frank goes toe to toe with an investigative journalist who refuses to give up her source, despite the source admitting to committing murder. Also, Danny is paired with a troubled teenager as part of an NYPD program aimed at influencing youth to make better decisions.”

Blue Bloods “Through the Looking Glass” airs tonight at 10:00 pm ET and we will be live blogging all the details. So don’t forget to come back and refresh your screen often for live updates. While you wait for the recap, check out a sneak peek of tonight’s episode below!

#BlueBloods begins with some guys spotting a bum sleeping on a bench. One pours lighter fluid on the guy and then tosses a lit match on him. Fire overtakes him and the man wakes screaming. The young men run off. Nicky interviews her mom about her job. Danny’s boss says he has to take part in Rescue Ride, a mentor program to help troubled teens. She says he and Maria will take Charelle Tyler on their ride alongs.

Frank gets an update from Gormley about the burned man. They turn on Anne Farrell, a reporter, who is all over this. The residents of the neighborhood complain about the lack of cops. They tell him Farrell has been all over them and is trending on Twitter. Frank says he wants to meet with Farrell. Charelle sasses them and says she’s not interested in their low paying crap jobs. Erin tells McBride she has a 20 year old homicide cold case she wants closed.

McBride asks why she wants to look into his mother murder. She asks if there were any leads. He says no then tells her he’s tried. She says she wants to put fresh eyes on it but he says it will open old wounds. Moore introduces Farrell to Frank. He thanks her for coming. Frank says they are terminally short handed but not short on ambition and achievements. She says police relations with the Brownsville residents are strained. He says she called the NYPD apathetic and racist.

Frank says the residents there disable all the security cameras and they replace them then they destroy them again. Frank offers to give her some insight into patrols but she makes it clear she’s gunning for Frank then leaves. Maria asks Charelle what she wants to do after high school and she snarks that she’s thinking about getting pregnant and going on welfare. Danny is sick of her smart mouth. They get a call about a homicide. They leave her outside and go on.

The place was tossed and Danny says they were looking for something. He spots a magnet and says it’s used to open a trap door. He finds it and opens it. There’s a bolt hole full of cash. Charelle comes in, see the dead body, gags and runs out. Danny follows her out and finds her barfing. He says that’s why he told her to wait. He tells her his first DOA is a decapitation. He says if she keeps it up, she’ll end up dead like that person.

McBride tells Erin that he knows she won’t drop this and asks what she wants to know. He says people liked his mom and was always helping people. She says she thinks they should try a new DNA test on the weapon. Maria tells Danny the dead girl is Amel Williams and the apartment is owned by Melvin Williams who was just arrested for dealing. Danny tells his boss he wants rid of Charelle and says this program won’t work but she says it worked for her.

Maria and Danny talk to Melvin and they tell him the found the trap. He asks about his girl Angel and Danny offers to protect her. Melvin says cops are the ones doing this. Frank asks Moore if Farrell has a point. He says that community is the murder capital of NYC. Frank says he hates crime like this burning that had no logic but pure evil. Frank says this culture thinks they’re the enemy and he wonders how to change it. Moore says Farrell just posted an interview with the killer.

Danny and Maria wonder if they have dirty cops or fake cops raiding dealer’s places after the get arrested. Danny tells Charelle not to assume it’s a cop but she says cops are the ones who always make assumptions. Farrell talks to the killer who says he’s a gang bangers. He says in his hood, you either are in a gang or are a victim of one. Frank asks for the name of the killer but she says they had a confidentiality agreement. She says it’s her right as a reporter.

Frank says she’s glorifying a killer but she says she’s trying to affect change. He tells her she’s talking crap and says she knows it. She tries to say if they understand the why she can stop it. Maria and Danny tell their boss the Money Street Kings are playing fake cop and robbing arrested drug dealers. Erin finds McBride and says he made a nice office out of the supply room. She says the ME got DNA off the knife that killed his mother. She says it’s Ennis Walker, his father.

McBride says he knew it would. He says he didn’t close the case because that would have meant acknowledging what he dreaded – that his father murdered his mother.

Nicky pulls out her iPad at family dinner but Frank says to put it up. She says it’s for her senior project and Eric says to put it up. Linda says talking without screens is important. She says it’s a video diary and she asks people she admires about their careers. Frank asks what her question is and she asks her grandpa what advice he would give his younger self. Frank says to say no to police chief. Linda says she’d be a doctor not a nurse.

Henry says to be present in our lives. Jamie says not to be so cautious. Erin says not to tell your brothers when you have a date. Frank asks Nicky what she would tell her younger self and she says never to forget where you came from. Erin talks to her dad about the burn murder. She says the DA wants to subpoena Farrell and he says she’ll cry first amendment. Erin says she has a way around that. Frank says Farrell has a personal agenda against him so he can’t be involved.

Erin tells him about McBride’s case and he says her intentions were good. Farrell’s lawyers asks to quash the subpoena to turn over the ID. The judge comes down on the side of Erin because the killer said he planned on future crimes. Farrell pleads first amendment and she’s arrested for contempt and locked up. Maria and Danny show their boss the trap they’ve laid for the fake cops. He sees Charelle outside and tells her to get lost.

Frank goes to see Farrell in her holding cell. He says he’s not the reason she’s there and says he wanted to tell her that in person. Frank says he’s not the enemy but she disagrees. He says the murderer belongs there instead of her and says that’s on him, her and the people who didn’t call 911. Frank says the guy lit another human on fire and asks if she has a reason he should not be arrested. He says she doesn’t have one.

Danny and Maria wait in the car outside the trap they laid. Danny hassles Maria about the guy she’s dating and she won’t tell. They see the car and van pull up they were expecting. Danny notifies the others. They notice Charelle is lurking nearby. They move to take the dealers and Danny warns them to be on the lookout for Charelle. Maria and Danny pursue one guy into a building. The guy has grabbed Charelle and says he’ll kill her.

While Maria talks to the perp, Danny sneaks up and shoots the guy. Gormley says the got an anonymous tip about the identity of the victim. Danny asks Charelle what she was thinking. She says she was writing the story and needed to see how it ended. They ask how she knew and she says it was all on the board where they were planning. Marie says she committed a crime and Charelle says so. Danny says he’s going to arrest her. He tells her 16 is an adult and she’ll go straight to Rykers.

She asks why he’s doing this. He says he can’t rescue her and says no one can but her. He says she can think about that while she’s in a holding cell with a bunch of animals. He sends her off to be processed. Farrell meets Frank at a bar at his request. She asks him to buy her a drink and she sits. She thanks him for getting the charges dropped and he denies that and denies ever putting her there. He asks who made the anonymous calls and she says he should know better than asking.

He says the guy confessed to the killing. Frank admits they have a long way to go in Brownsville. She says she wants first access to the killer to paint him as a cautionary tale. They banter and drink. Looks like he’s into her. Danny’s boss is surprised that Charelle is still in holding. He says he’s not booking her, just scaring her. She asks if he thinks this is the right approach and he says yes. He tells her he skipped school and his dad let him get picked up as a juvie and he never skipped again.

Erin finds McBride and apologizes for reopening the case. She says it wasn’t the outcome she expected. He says he saw his father rarely growing up and reached out to him a few years ago before he suspected him. He says his dad died before he could ask him about it. She asks why he did it. He says his Grandma told him that his mom was planning on moving them out of the city and he must not have liked it. He says he’s the son of a killer. Erin says she went through the property file and found his mother’s ring for him. She says that’s his legacy not what his father did. He thanks her.