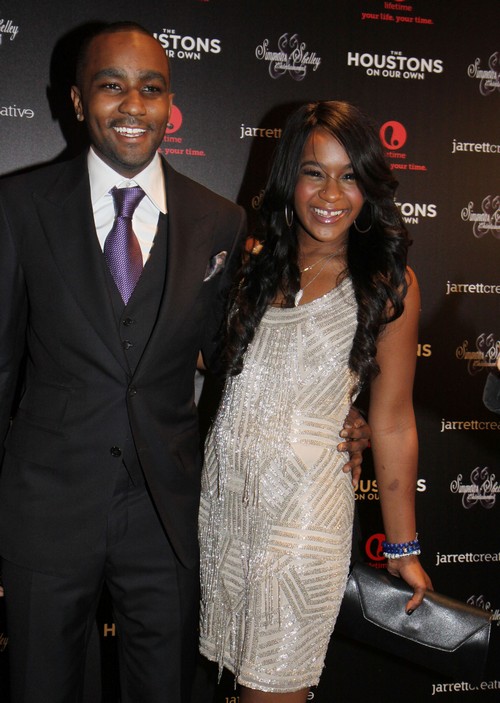 Bobbi Kristina Brown lies in a coma on life support and Nick Gordon is guilty of her attempted murder according to her family. Police are investigating the Bobbi Kristina drowning incident as a violent crime with Nick Gordon as the prime suspect accused of foul play. In the weeks since Bobbi Kristina Brown, daughter of Bobby Brown and the late Whitney Houston, was found unresponsive in her bathtub, the Brown family has demanded answers from Nick Gordon. More evidence of Nick’s violent junkie behavior has come to light courtesy of TMZ:

Nick Gordon was so whacked out on drugs and alcohol before his “interview” with Dr. Phil, he couldn’t even walk and was pushed around on a luggage cart.

When Nick realized this was an intervention to get him into rehab, he went nuts. We’re told on his way out of the interview he punched 2 members of Dr. Phil’s staff.

Nick recently tweeted that he’d talked to cops, but the Browns haven’t been satisfied with Nick’s level of cooperation in the case. Now it seems that Nick is trying to use Bobbi Kristina’s situation for his own personal gain. Nick recently took part in an intervention that’s set to air on “The Dr. Phil Show.” According to People, an inside source said that Nick checked into rehab shortly after the appearance. According to TMZ Nick Gordon was inebriated and violent during his Dr. Phil interactions – wasted on drugs and alcohol – and punched two of Dr. Phil’s assistants. This is an example of the behavior of which Nick Gordon is capable and that police fear led to the attempted murder Bobbi Kristina Brown.

The Brown family isn’t too pleased that Nick’s attempting to cover his tracks and gain public sympathy by indulging in the media circus. In fact, Bobbi Kristina’s aunt, Leolah Brown, took to Facebook to voice her displeasure. Leolah directed her post at Dr. Phil, but it’s clear that she wants everyone to realize what kind of a man Nick truly is. In her Facebook message, Leolah wrote that “Nick Gordon is under investigation for the attempted murder” of Bobbi Kristina Brown and they “have strong evidence of foul play.” Leolah added that until the investigation is completed by law enforcement, she would ask that no one would “provide this individual a platform to spin this situation to his benefit.”

Nick is certainly doing his fair share of spinning lately. From tweets about how his voice can save Bobbi Kristina to carefully crafted statements by his lawyer, it seems Nick knows he’s in trouble. Right now it appears Nick’s strategy is just to throw everything out there and see what sticks. Nick’s recent rehab visit could be setting up a “the drugs made me do it” defense if criminal charges are indeed filed.

If there’s any truth to Leolah’s words, it sure sounds like Nick better prepare for the worst. Bobbi Kristina’s bruises and bloodied mouth point to Nick’s guilt. Max Lomas, the friend who found Bobbi Kristina unconscious, also said Nick cleared the scene of evidence and cleaned up blood stains that fateful morning. Bottom line, the case against Nick Gordon is getting stronger and jail time looks like a definite possibility. We’ll keep you updated on any impending charges of assault or attempted murder.

What do you think about the news that Leolah Brown believes Nick Gordon is guilty? Do you think the “strong evidence of foul play” will be enough to put Nick away? If Bobby Brown decides to pull the plug on Bobbi Kristina, do you believe Nick will be convicted of murder? Nick has proven with the incidents surrounding the Dr. Phil interview reported above that he is capable and prone to violent junkie behavior. Let us know what you think in the comments below and don’t forget to check CDL often for the latest updates on Bobbi Kristina Brown.