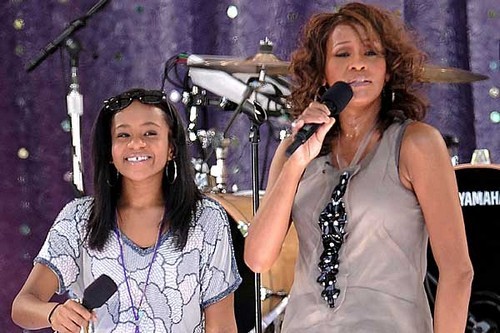 Bobbi Kristina Brown might be off life support, but her situation seems to be grim if all the swirling rumors are true. According to reports, Bobbi Kristina is moving home, which suggests Bobby Brown is finally letting his daughter go. However, that means Cissy and Pat Houston will finally get the $20 million inheritance that comes with the death of Bobbi Kristina Brown.

Sources close to the family have told media outlets that shortly after a judge gave co-guardianship power to Bobby Brown and Pat Houston regarding Bobbi’s health and medical decisions, Pat quickly went to work cleaning out Bobbi’s home. The same home she shared with Nick Gordon, the 25-year-old who lived with Bobbi Kristina Brown in the townhouse that turned into a “dingy drug den” and is also under investigation in conjunction with Bobbi’s drowning incident.

Pat and her husband, Gary Houston, have a big dumpster outside the house, tossing everything away to create a “home sweet home” for Bobbi Kristina. The family plans on surrounding her with images of her mother, to make the sole heir of Whitney Houston’s estate more comfortable. Some suggest this could be a bad sign. Atlanta Daily World shares a theory that the family wants to move her home so they can say their “final farewells” before Bobbi Kristina dies.

It’s not a secret that Pat and Cissy Houston have been pushing Bobby Brown to let Bobbi Kristina go for months. Cissy has publicly stated on two different occasions she is “alright” if her granddaughter dies, and has little to no hope for her recovery. Pat Houston has also reportedly said she just “wants the nightmare to be over.” It’s hard to believe Pat and Cissy have Bobbi Kristina’s best interest in mind. They have nearly $20 million reasons to let Whitney Houston’s daughter go.

It’s also not a secret that Bobby Brown has been fighting to keep Bobbi Kristina alive. There have been several arguments and family meetings to decide what to do with Bobbi Kristina. Bobby has refused to remove Bobbi off of life support and asserted he wanted “God to make the decision.” Now that Bobby no longer has complete control of Bobbi Kristina’s medical decisions, it makes fans wonder if Brown will allow Bobbi to be moved from the Atlanta rehab facility back to the home where she was found face down in a bathtub full of water.

If Bobbi Kristina is actually moved home, it might suggest Bobby Brown is either losing control in the family or ready to accept Bobbi Kristina’s condition. Cissy Houston explained that Bobbi is breathing on her own, but has irreversible brain damage. Bobbi Kristina’s quality of life could be a huge issue, as Cissy further claimed that doctors have informed her Bobbi could live for years to come without any changes. That means, Bobbi Kristina could live on, racking up medical bills which will drain her inheritance and eventually leave Pat and Cissy Houston with nothing. If Bobbi Kristina Brown passes away soon, the Houston family will finally get whatever is left of the $20 million estate left by Whitney Houston.

What do you think CDL readers? Are Pat and Cissy Houston thinking about what’s best for Bobbi Kristina Brown, or do they have their eyes on the $20 million inheritance that Bobbi got from her mom, Whitney Houston?