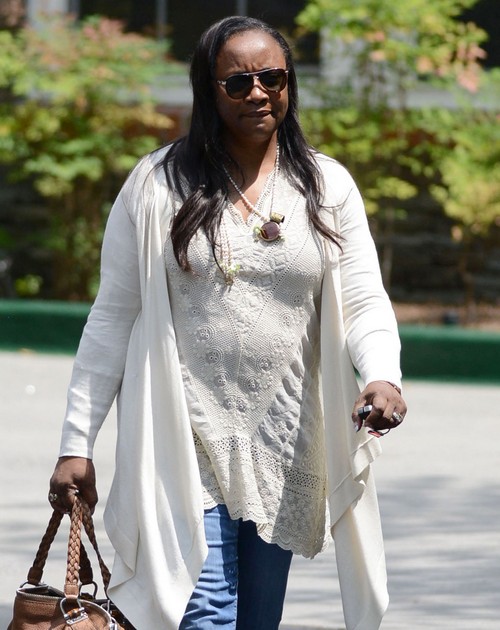 Pat Houston has essentially named herself as President of all things Whitney Houston and Bobbi Kristina Brown. With Cissy Houston by her side, Pat has full control of the circus. That was evident during Bobbi’s days in a coma, when only Bobby Brown wielding a small amount of power. After Bobbi Kristina’s death, Pat pretty much took over and planned the funeral with a Sweet 16 theme that was such a turnoff Dionne Warwick allegedly threatened to boycott Bobbi’s funeral; offended Pat Houston was turning the somber service into a “school prom party” according to MailOnline.

Pat didn’t hold back or give into objections. Whitney Houston’s sister-in-law hosted the funeral “afterpary” at her home in Atlanta according to the Daily Mail. Meanwhile Bobby left in tears to a separate reception hosted by the Browns. Mourners arrived to Houston’s home singing, waving their hands in the air, smiling, and ready to rejoice. Images of the “celebration of life” reception even showed some guests arriving via a party bus.

Since the days of Bobbi Kristina’s death and funeral, Hollywood has been eager to crank out a Whitney Houston and Bobbi Kristina biopic. Producers want to strike while the public interest in the doomed mother daughter duo is still heighted. Bobbi Kristina was in charge of approving scripts and handing over rights to Whitney’s biopic, but now that Bobbi is gone it opens the door for Pat Houston to take charge again. It’s a safe bet that Pat is manipulating the biopic to suit her and the Houston family, undoubtedly raking in more cash courtesy of the death of Whitney and Bobbi.

The Whitney Houston and Bobbi Kristina movie isn’t all that Pat Houston is allegedly manipulating. According to Bobbi’s friend and former roommate, Mason Whitaker, a “bad batch” of heroin might actually be to blame for Bobbi’s death. Mason posted his claims on Facebook stating Danyela Bradley and Max Lomas were at Bobbi Kristina’s townhouse the day she was found unresponsive in her bathtub. The two “friends” reportedly convinced Bobbi to start shooting heroin about a month before the drowning. After Nick Gordon and Bobbi had their huge screaming match, Bobbi shot the bad batch of heroin. Then, Whitaker claims, “And if you knew anything about the real facts of this case, you’d know that Pat told Max and Danyela that she would pay them ‘X’ amount of money and be able to pay off the DA to have immunity if they made up a story that it was only Nick who killed her.”

What do you think? Was Pat Houston’s Sweet 16 funeral and party tasteless? Let us know what you think in the comment section below.