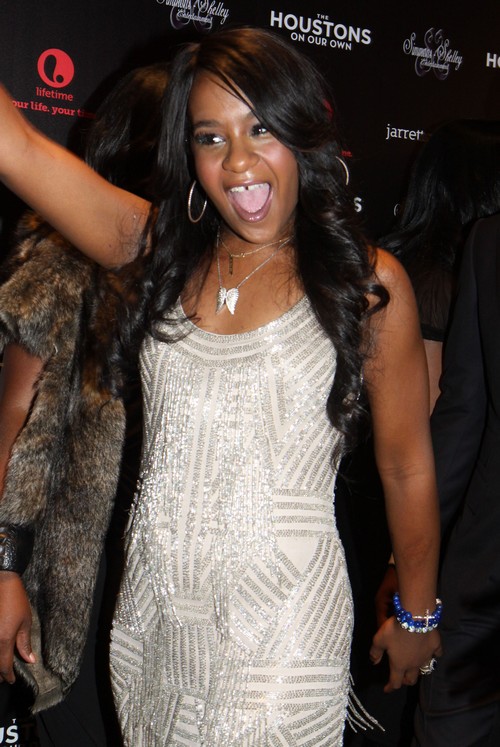 With Bobbi Kristina Brown supposedly taken off all medical treatments except for palliative (i.e. pain relief) medications when she was moved to hospice, by most accounts she should already be dead. But there may be a secret war being waged behind the scenes at the Peachtree Christian Hospice between her the families of Krissi’s parents – the Browns and the Houstons.

The relationship between the two clans has been contentious since Whitney Houston and Bobby Brown were first dating then married. The Houstons never thought Bobby was good enough for Whitney and held him responsible for the drug abuse that ravaged her body, left her skin and bones, ruined her voice for a time and ultimately led to her death.

Brown admits he did drugs with then-wife Houston, but refused to accept responsibility for luring her into a deadly drug habit that nearly ruined her career. Whitney was just getting back on track when she drowned in an LA hotel bathtub under coincidences eerily similar to Bobbi Kristina Brown’s tragic accident that has left her with little hope for recovery as she clings to her last days of life at the hospice.

Unbeknownst to Krissi, whose brain trauma is so extensive she has no idea of what’s going on around her, the Browns and Houstons are at war over her fate and her fortune. The Browns have long said that they felt that Krissi could pull out of this medical crisis – although the fact that she’s been moved to hospice clearly indicates that a “recovery” is not in the cards. However, since she was young and healthy when the brain injury occurred and her body is still in good shape, Bobbi likely could live on for years with medical support.

The Browns were rumored to be lobbying for more time to allow for a “miracle” from God and for a chance that she might somehow recover. But the Houstons are said to be pushing for an expedited end to Krissi’s life so that her medical care doesn’t cut into Whitney’s fortune too much. Every day that Bobbi Kristina remains alive represents less money for Cissy Houston and Pat Gowan Houston, as Krissi’s conservators, to inherit.

And that’s what this final battle comes down to Krissi’s fate or the fortune. Bobbi Kristina likely had top-notch insurance coverage, but even so, with her being so young, they may not have had her covered for extensive trauma. Many policies cap at $1 million which means that her hospital and hospice care may now be coming directly from Whitney Houston’s $20 million estate she left in trust for Krissi and which the Houston family is controlling.

But the family war hinges on control over not just the money, but over control of Krissi’s future which the Houstons seem determined not to let last very long. As her biological parent, Bobby Brown has an equal say in what happens to his daughter as do the conservators. That means that until Bobby consents to her being taken off all life-saving treatments, the Houstons have to sit on their hands and wait impatiently to get their hands on the $20 mill.

And this could explain why the two hearses at the hospice have come and gone. Perhaps the Houstons were making a move to end Krissi’s life by withholding nutrition, liquids and other treatment that could keep her going. But with Bobby Brown back in Atlanta following the birth of his daughter Bodhi in LA with baby mama and wife Alicia Etheredge. Brown may have insisted that treatment be restored to his daughter which could have brought her back from the brink of certain death.

When feeding and liquid IVs are removed from a patient to allow them to pass, medical sources reveal it can take anywhere from a few days to two weeks for them to fade away from the lack of nutrition and hydration. However, according to end of life care info, the introduction of pain killers for comfort can often hasten the death because they weaken the heart. But if the Browns get their way and they can restore the IVs that sustain her, Krissi could linger indefinitely.

There are rumors that the Houstons controlling Krissi’s money may have offered Bobby Brown a financial incentive to encourage him to allow his daughter to pass on – with Whitney’s estate valued at more than $20 million (and with more to come) while Brown’s is estimated to be at less than $2 million and with the potential to earn just a few thousand dollars a year, he may be tempted to go for the cash grab and let his little girl go. It’s sad all around.

Come back to CDL often for more updates on Bobbi Kristina Brown and the family battle of her life and death.