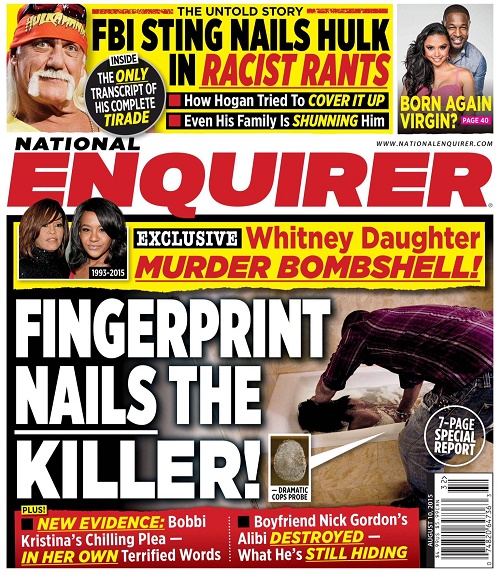 Since Bobbi Kristina Brown’s death, the world has been waiting with bated breath to learn if her boyfriend Nick Gordon will be charged with murder. Suspicions surrounded Gordon for months after Bobbi Kristina’s tragic drowning in January, and even Bobbi’s own family members have openly accused Brown of being responsible. Of course, the fact that the doctors on duty the day she was rushed to the hospital found mysterious bruising on her face didn’t exactly help Nick’s case. According to a new report in National Enquirer, some new evidence in the case could lead to Gordon’s arrest.

This week’s cover of National Enquirer features a photo of a woman in a bathtub face down – although it is not Bobbi Kristina, it appears to be a reenactment of her drowning. The headline reads, “Fingerprints Nail The Killer! Boyfriend Nick Gordon’s Alibi Destroyed, Bobbi Kristina’s Chilling Plea.” According to National Enquirer, Bobbi’s family intended on taking Nick to civil court as soon as she was rushed to the hospital – and they had “CSI style evidence” collected from Bobbi’s body and home.

A law enforcement source dished to National Enquirer, “While it is no secret that Nick and several others were in the townhouse when paramedics arrived, it is a piece of physical evidence found upstairs that directly relates to wrongdoing in the incident – and that contains the incriminating fingerprints.” The source doesn’t say exactly what the fingerprints prove or where they were located, but they do seem confident that those fingerprints will put Nick Gordon behind bars.

Nick Gordon’s family also plans to use text messages Bobbi sent to a pal just hours before her drowning, which reveal that she and Nick had been fighting and her boyfriend was being possessive and controlling. National Enquirer obtained text messages that Bobbi sent to a friend in which she stated, “Yeah I just seriously don’t know what to do about him. You know how he is. Ut I am so sick of the fighting and him telling me what I can and can’t do.”

Between the fingerprints, the text messages, and the autopsy report revealing that Bobbi had swelling in her brain – her family is certain that the DA will have no choice but to press charges against Nick Gordon for Bobbi Kristina’s death. Even if he is not arrested, at this point the odds of them losing their $10 Million civil suit against Nick Gordon are slim to none. Do you believe that Nick Gordon is responsible for Bobbi Kristina’s death? Share your thoughts and theories in the comments below!