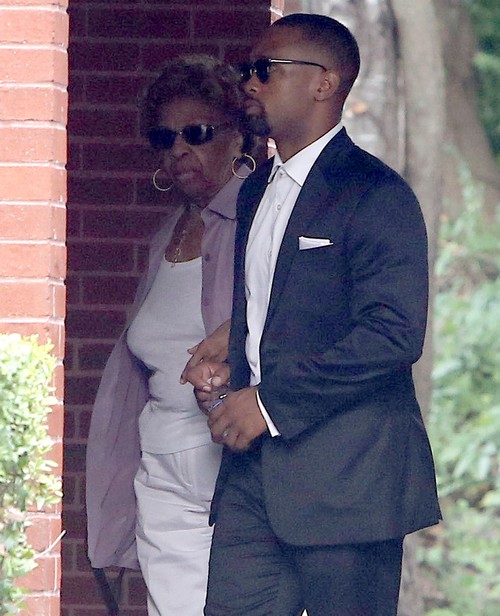 Are Bobbi Kristina Brown open casket death photos from her wake and funeral about to scandalize the world the way Whitney Houston’s did? With Whitney Houston’s money about to be totally cut off from anyone in the Brown camp, will one of the disgruntled clan make a last-minute cash grab by trying to snag photos (or video) of Bobbi Kristina Brown in her coffin? Of course this is horrifying, but a precedent has been set. First, someone in one of the families sold a deathbed photo of Bobbi Kristina that was taken prior to her move to hospice and reportedly scored a $100K payday for the photo of the ailing offspring of Whitney Houston.

Second, Whitney Houston herself fell victim post-death to a coffin cash-grab when someone took a photo of her body in her coffin at the funeral home viewing the night prior to her service. Many people blamed various Houston and Brown family members for the horrible intrusion into Houston’s post-mortem privacy and many more criticized the National Enquirer for making a typical tabloid move and buying and publishing the photos.

The National Enquirer has a long and sordid history of distributing photos of this ilk – they showed photos of Elvis in his coffin, John Lennon in his coffin, Michael Jackson autopsy photos, and even other photos of Bobbi Kristina Brown showing her with teeth knocked out unconscious in a medical facility as well as others of her with a neck brace and oxygen mask on, all taken while the young woman was in a coma and fighting for her life.

While The National Enquirer is certainly acting in poor taste by purchasing and publishing these photos, it’s greedy and unscrupulous friends and family members that are feeding the beast by taking photos in these vulnerable moments when the victims are either ailing or dead and cannot defend themselves. So the real question is not whether there will be Bobbi Kristina Brown coffin or funeral photos and/or video but then they will be released.

Whomever sold the deathbed photo of Bobbi Kristina has likely already received a follow-up offer from the tabloid for more photos. And with many, many people rumored to have taken advantage of Bobbi Kristina Brown’s cash flow from mom Whitney Houston’s estate – Nick Gordon included – and this cash supply now cut off, it won’t be surprising if they try and make one last cash grab before the money train derails for good.

It seems that even in death, as in life, Bobbi Kristina Brown will be surrounded by turmoil and people looking to take advantage. The Browns and Houstons are fighting over her funeral as they did over bedside space at the hospice, are fighting for who will speak for her at the service and, ultimately, over the many millions that Whitney Houston left her daughter Bobbi Kristina.

Even Bobbi Kristina’s move to hospice was cash-driven and was rumored to be motivated by the high cost of care that prolonged her life when doctors had told the family that Bobbi Kristina Brown had “global and irreversible brain damage” as a result of the several minutes she spent underwater in a bathtub, surely complicated by the drugs she was rumored to have in her system at the time.

To be sure, the death of Whitney Houston and her daughter Bobbi Kristina Brown are eerily similar and we now wait to see if the deathbed violation her mother suffered at the hands of a greedy loved one will be echoed again as Whitney’s daughter is laid to rest.

Be sure to check back with CDL for more Bobbi Kristina Brown updates as they become available.

Cissy Houston is seen attending the wake of her granddaughter Bobbi Kristina Brown in Atlanta, Georgia on July 31, 2015 FameFlynet