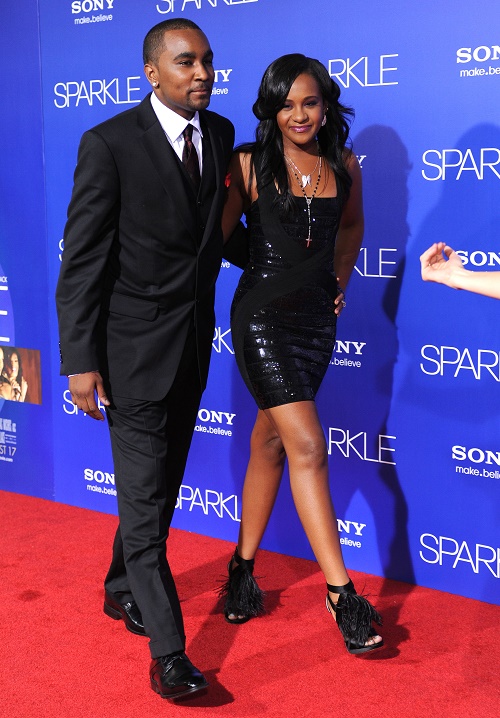 Bobbi Kristina Brown is still in a medically induced coma and on life-support in a Georgia hospital after a tragic drowning accident at her home. While Bobbi has been unconscious, all hell has broken loose around her as Cissy Houston, Bobby Brown, Nick Gordon, and all of their families have been embroiled in an epic feud over Bobbi’s $20 million inheritance and who is responsible for her drowning.

Bobbi’s alleged husband, Nick Gordon, has been very active on Twitter since the drowning – and has lashed out at Bobbi’s father Bobby Brown. According to Nick, the Browns and Houston families have banned him from visiting Bobbi in the hospital – although they have vehemently denied his allegations. Nick Gordon didn’t hold anything back on Twitter, and ranted that Bobby Brown didn’t care about his daughter and has been MIA for years. He even went as far as accusing Bobby of holding vigil at the hospital because he is waiting for his daughter to die so he can cash in on her inheritance.

In an unexpected twist, Nick Gordon did a complete 180 and changed his tune on Twitter. On Monday March 2, Nick tweeted, “I forgive you @KingBobbyBrown much love I wish we could get together and deal with this as fam.” Nick’s unexpected apology has everyone scratching their heads – either Nick has completely lost his marbles or he had an ulterior motive for issuing a public apology to Bobby Brown. Perhaps Nick finally realized that cursing out the Houston Family and Brown Family wasn’t going to get him in to the hospital to see Bobbi K. and he is trying a more tactical approach. Or another popular theory on Twitter is that he is making nice with Bobbi’s family in hopes that they won’t try to press charges against him in his “wife’s” drowning case.

Why do you think Nick Gordon has changed his tune and issued an apology to Bobby Brown? Do you think it was sincere, or he is just trying to make nice with Bobbi’s father so that he can visit her in the hospital? Will it work? Let us know what you think in the comments below!