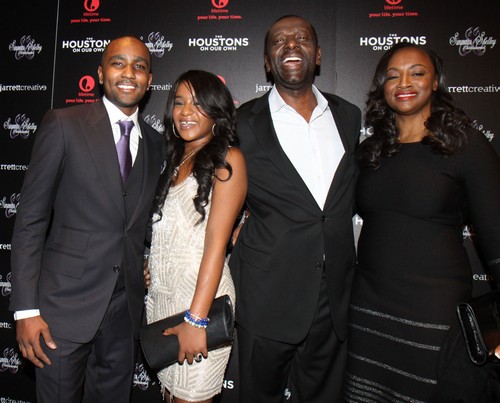 Bobbi Kristina Brown is being taken off life support at the end of this week if she shows no improvement according to a new report. Radar says that a source close to the family reports Bobby Brown is praying for his daughter but will make the final decision to remove life support at week’s end. Does Bobby Brown get to make such decisions unilaterally?

Bobbi Kristina Brown, daughter of Bobby Brown and the late Whitney Houston, remains on life support at Emory University Hospital and the stress of the whole situation is starting to take a toll on those around her. People magazine reports that many members of the Brown and Houston families have been popping in and out to offer their support to Bobbi Kristina. Bobby Brown and Bobbi Kristina’s grandmother, Cissy Houston, have spent the majority of their time in Atlanta by the 21-year-old woman’s bedside.

With so many Browns and Houstons in one place, things are bound to get a little tense. After all, the Brown and Houston families aren’t exactly known for getting along. There have even been reports of Browns fighting Browns. Bobbi Kristina’s aunt, Tina Brown, recently fought with her son, Shayne Brown, over a parking ticket at a nearby hotel. Tina cut Shayne’s head with a glass bottle and he later drove himself to the hospital for treatment.

Fortunately, most of the fighting at the hospital hasn’t turned physical. Perhaps Bobby Brown has been trying to keep everything as sane as possible for Bobbi Kristina’s sake. According to one Brown family member, “Bobby Brown doesn’t want any part of the drama.” The relative added that “he’s there for Krissi, not for us.” At least Bobbi Kristina has someone there for her in her time of need. Nick Gordon has been banned from the hospital as the evidence in the criminal investigation mounts against him. In fact, Bobby Brown doesn’t even want Nick’s name mentioned. The Brown relative said that Bobby wants to encourage “positive energy” around Bobbi Kristina and “Nick is not positive energy.”

Ever since Bobbi Kristina was found unresponsive in her bathtub over two weeks ago, rumors have been swirling about her declining health. However, the Brown family member claimed that the reports have been exaggerated in the media. The relative admitted that the situation is serious, but noted that there’s been no major change in her condition in over a week. For now, the Browns and Houstons are just watching and waiting. They continue to ask for prayers for Bobbi Kristina’s recovery.

What do you think about all the tension between the Browns and Houstons? Does it have anything to do with the $20 million inheritance from Bobbi Kristina’s mother, Whitney Houston? Will the Brown and Houston family members eventually reach their breaking point from the stress of the situation? What about the report that there’s been no significant change in Bobbi Kristina’s health in over a week? Do you think Bobbi Kristina can recover from her incident? Do you believe the latest report that Bobby Brown is taking his daughter off life support this weekend. Let us know what you think in the comments below and don’t forget to check CDL often for the latest updates on Bobbi Kristina Brown.