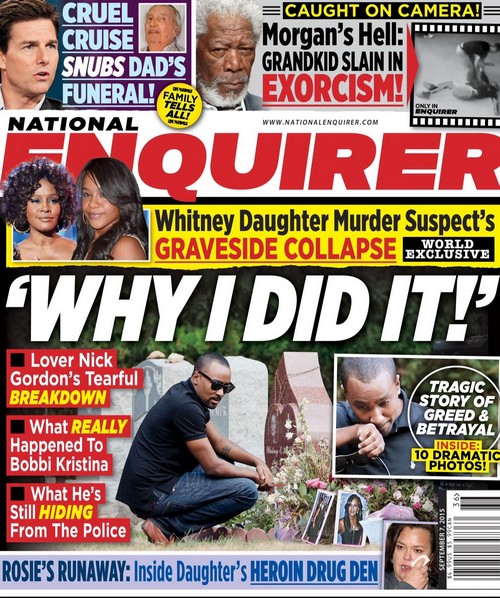 Bobbi Kristina Brown died earlier this summer and Nick Gordon, her fake husband, was persona non grata at the funeral, but that didn’t keep him away from her grave. Turns out Nick Gordon made a secret paid trek to New Jersey – the first time he’s left Orlando since Bobbi Kristina’s tragic “accident.” A National Enquirer shutterbug captured images of an obviously distraught Nick Gordon at her graveside. Here’s what went down. Note that Nick was allegedly paid $40,000 for this sincere display of contrition.

Nick Gordon brought pink and red roses to place on Bobbi Kristina Brown’s grave, along with photos of the couple in happier times and then he knelt and cried for a while. Gordon hasn’t seen Bobbi Kristina Brown since she was grievously injured on January 31 after an apparent knock-down drag out fight with Nick Gordon. According the onlooker, Nick Gordon showed up to the empty New Jersey Fairview Cemetery at around 6:30 pm.

After a period of apparent introspection, Gordon bizarrely crouched, kissed her headstone then prostrated himself on Bobbi Kristina Brown’s grave before standing again and spending a few more moments in solitary silence. All told, the visit lasted about 15 minutes. Once he was safely back in Florida, Nick Gordon surfaced on social media and tweeted how blessed he was to have Bobbi Kristina Brown in his life and added #happymemories.

Investigators will also be looking at a possible third party that was present just outside the bathroom where Bobbi Kristina Brown was found face down. A witness in the house said that Gordon came out of the bathroom, after Bobbi Kristina was rumored to already by lying in the water, and laid down on the bed with a girl then said “Now I want a pretty little white girl like you.” That “white girl” is allegedly Danyela Bradley, the 18 year old girlfriend of Bobbi Kristina’s ex Max Lomas.

Max Lomas has been embroiled in drug charges, was rumored to have sold and done drugs with both Bobbi Kristina Brown and Nick Gordon, and was also in the house on the day Bobbi Kristina was injured and left near death. Max Lomas was the one who dialed 911 and Danyela Bradley’s mother Marlene told the National Enquirer that her daughter told her that Nick “did something to her [Bobbi Kristina Brown].”